Gas Wrap-up and Next Steps 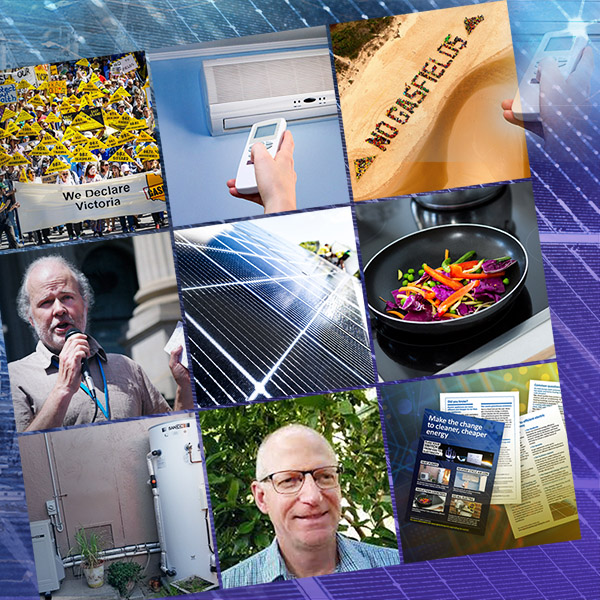 July’s meeting looked at Australia’s relationship with fossil gas at two scales, firstly, at a mega scale, looking at national and Victorian gas expansion plans with Friends of the Earth legendary campaigner Cam Walker, and secondly in our own backyard where energy advisor Tim Forcey explained the benefits of clean electric appliances at home.

You can watch the event again on our YouTube channel (with handy chapter points) or on Facebook here. Check out our tweet string for notes and links.

Our Co-convenor Lynn Frankes introduced the evening, saying gas is the “next frontier” of our fight against climate change. “Our nation is expanding gas exploration and extraction at an alarming rate with the full support of our Federal government”.

Our first speaker was Friends of the Earth Campaigns Co-ordinator, Cam Walker. Cam was actively involved in co-ordinating the campaigns that led to the Victorian permanent ban on unconventional gas and the moratorium on conventional onshore gas. He has lectured in environmental politics and change theory at RMIT University and is a leading environmental and climate justice campaigner, building movements for over 25 years.

Cam Walker knows the fight against gas inside and out. He understands what it takes to activate communities and develop alliances that together can win the battle against new gas. You can connect with Cam on twitter here. The following text continues with links to our YouTube video chapter points and some extra resources.

What is the current landscape?

We have reached a tipping point where communities understand the need to act on climate change, we have the technology to replace fossil fuels and renewables have become cost competitive. The “gas led recovery” simply doesn’t make sense, Cam says, but the Morrison hasn’t worked this out. The Federal government is pressing ahead for the Kurri Kurri gas plant despite widespread community and industry opposition, with $600 million of public funds at stake – and that is just the start of public money going to gas.

Cam surveyed for us the significant gas projects that are currently proposed around the country both onshore and offshore, conventional and unconventional. It is enough to make your head spin, particularly in light of the International Energy Agency’s statement that no new fossil fuel projects should be developed after 2021. Victoria is now at risk with the lifting of the moratorium on onshore drilling – where areas such as the Latrobe Valley and the Otways, and some of our best food bowls, are vulnerable to polluting gas.

What made the difference in Victoria?

Cam explained that the key to Victoria’s successful campaign to ban fracking and gain an onshore moratorium was bringing in new constituencies to defend a beloved place from a common threat, gas. Everyone was welcome, despite ideological differences. The campaigns reached outwards and pressured upwards, well supported by impressive amounts of data collection.

Politicians couldn’t ignore whole population surveys that gave rates of well over 90%, saying our community will be gas-free.

There are so many ways we can participate in the fight against gas.

Cam encourages us to join a climate action group or environmental organisation and make our voices heard.

You can read a summary of gas impacts and current campaigns in Lighter Footprints’ blog here.

After hearing from Cam we went from the political to the personal with energy advisor Tim Forcey.

Tim Forcey is a chemical engineer with over 35 years experience working in the oil, gas and electricity industries in Australia and abroad. Between 2013 and 2017 Tim acted as energy advisor at the University of Melbourne. Over the last decade, Tim has advised over 1,000 Melbourne homes on energy efficiency and clean energy transition.

Tim is a man on a mission. He has inspired thousands of people to transition their homes off gas and administers the hugely successful My Efficient Electric Home Facebook group with over 32,000 members who help each other save money as they transition to greener, more comfortable electric homes. Check Tim’s twitter to keep up to date!

Tim went through some of the basics with us. You can decommission your gas meter! – starting with picking up the remote on your reverse cycle air conditioner and selecting the “heat” button, the lowest of low hanging fruit! Most people don’t realise their air conditioner can be used as their heater, replacing gas – this was part of a study at Melbourne Uni.

Next change over your gas water heater to an efficient electric heat pump hot water heater, shift to induction cooking and Bob’s your uncle, you can disconnect from the gas network, saving money and the planet at the same time.

Tim moved from gas heating, installing two reverse cycle air conditioners (a 2.5kW and a 3.5kW), heating his home for one third of the cost of his previous gas heating.

Many of us have solar PV and Victoria’s electricity network is progressively decarbonising, probably going faster than the stated 50% renewables trajectory to 2030. Ultimately, we will all need to get off gas if we are to become carbon neutral. As Bass Straight gas runs down in the middle of the decade we will be more dependent on more polluting, more expensive piped gas from Queensland so moving off gas is doubly protective, helping us not bake in new, unnecessary gas infrastructure.

Taking it from here

Are you interested in the benefits of a cleaner, safer electric home but are still not sure? Environmental scientist, Dr Josh Byrnes, explains why, and shows us how, he took his home off gas in this 2 minute video.

Information about moving your home away from gas

I only have a small budget to get started. What can I do about keeping my family safer and moving off gas?

Here are some tips to reduce your gas usage: