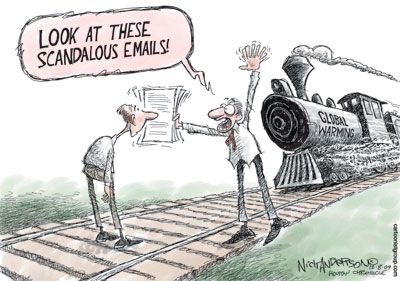 There have been a few blog posts about the report by Sir Muir Russell into the so-called “climategate” affair. (This controversy has gone over the horizon somewhat; it all happened last November when email messages that were hacked into from the university computer network were released to the media. The messages were supposed to show that scientists at the university had ignored or suppressed data that disproved the anthropogenic climate change hypothesis.)

From Andre Revkin’s post on Dot Earth:
“The Independent Climate Change Email Review is finished and, within its constrained mandate, has cleared climate scientists and administrators at the University of East Anglia of claims of malfeasance rising out of the contents of folders of e-mail messages and files extracted from computers there and posted around the Web last November. Two other inquiries with slightly different focal points also cleared the scientists and school.”

From Gavin and Mike’s post on RealClimate:
“The main issue is that [the report authors] conclude that the rigour and honesty of the Climate Research Unit scientists is not in doubt [ … ] Secondly, they conclude that none of the emails cast doubt on the integrity and conclusions of the IPCC, again, something we have been saying since the beginning. They also conclude as we did that there was no ‘corruption’ of the peer-review process. Interestingly, they independently analysed the public domain temperature data themselves to ascertain whether the could validate the CRU record. They managed this in two days, somewhat undermining claims that the CRU temperature data was somehow manipulated inappropriately. (Note that this exercise has been undertaken by a number of people since November – all of which show that the CRU results are robust). All in all, none of the various accusations and insinuations that have been floating around the blogosphere have been sustained.”

The report has received some coverage in the local media, but with nowhere near the same fervour as the original allegations.