Cr Ross had, during her term as mayor, and in line with the council’s public line on sustainability, adopted the use of a hybrid car.

This piece in the local Progress Leader newspaper questioned the incoming mayor regarding the fate of the hybrid:

However, he would not say whether he planned to use the hybrid car driven by outgoing mayor Coral Ross.

“I think other cars have superseded that technology so I don’t think I’ll be using that particular car, but I’ll take (council) officers’ advice on that,” he said.

We subsequently heard that Cr Wegman did take the advice of council officers on what options were available to him and he selected a car with a ‘V6’ engine. Whilst it’s not an SUV (the council’s capital nor petrol budgets are unlikely to run to such an extravagance) it’s not exactly in line with the council’s self professed position as “leading by example on environmental sustainability”.

1. Perhaps the mayor could have taken the advice that council itself dispenses to local citizens on the topic of transport? This document contains a great deal of the relevent information and encouragement required to make an environmentally appropriate decision on a car purchase. Not doing so does seem a bit hypocritical, doesn’t it?

2. Or he could have turned to the Australian Gov’s Green Vehicle Guide for advice. The picture below shows how a typical Australian V6 compares with a typical hybrid (not just on CO2 emissions). No doubt here about whether the V6 engine’s technology supercedes that of the hybrid . . .

3. The council has also signed up with Greenfleet to reduce the greenhouse emissions from its entire fleet of vehicles. So by operating a V6 in place of the hybrid, the fleet’s vehicle emissions will have increased and logic says the Greenfleet offsetting bill should increase too. More ratepayer’s money.

Putting aside the issue of the car’s environmental credentials and the thinking behind that decision, we’d like to know why the hybrid was replaced in the first place? Why the ‘need’ for the extra expense to the ratepayers? What happened to the old hybrid, where did it go?

More important is what sort of example that the decision sets, especially from a community leader.

It’s all too easy for any of us to mentally ‘sign up’ to being ‘green’ and professing our public support. What’s more difficult and more important is that we as individuals and as communites act on those beliefs in the small and large decisions we make every day. Only by doing this will we actually promote and improve our sustainability.

We hope Boroondara council sets a good (and leading) example and continues its journey towards improved sustainability outcomes for itself and for the city as a whole. If you’d like to encourage them in this, please do contact the mayor and let him know . . .

Lighter Footprints in the news! 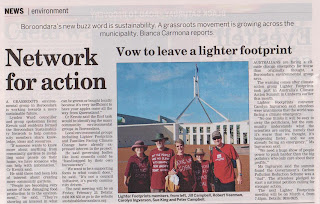 It’s coming under increasing scruitiny and pressure from all sides – although perhaps not from the polluting industries which stand to profit from it!

Now the Federal Opposition is chiming in, having recognised an opportunity to torpedo the Rudd Government’s central response to climate change. They now want carbon taxes to be put on the table along with any other suitable measure. Well done! How things have changed since they were in power under PM Howard!

Cap and trade schemes are complicated, open to abuse and not yet proven in their capability to actually reduce emissions. We know this because Ross Garnaut admitted as much when he launched his climate change Review last year. But, he said, since everyone else (who had bothered, so far) had chosen cap and trade, then Australia should too, so we could link into a global system.

He also said the scheme should be kept as pure as possible and not contain any significant market distortions. Obviously the government and big business were not listening when he said this. The Australian CPRS was a sop to the business lobby and, even if it were successful, would lead to a miserable 5% reductions (from year 2000 levels) by 2010. Why bother?

Far more popular – among those who worry about these things – are carbon ‘taxes’ and carbon rationing. With a bit of luck and some hard lobbying, we may just have the whole ball of wax thrown into the bin (unfortunately, along with the millions of dollars of taxpayer’s money it cost to create and market) and get something better, done right next time. And with some urgency!

For more on the breaking news, see this story from the ABC (we took their title too!).

“We’ve never seen anything like this in Victoria’s history”

It has been a tough summer in Australia.

The news of records set by the heatwave was quickly surpassed by the tragedy of the bush fires. And all of this against the backdrop of the continuing drought and some of the lowest summer rains on record. Not to mention the torrential rain and floods up north.

This story (from the SMH) covers the heatwave from the meteorologists point of view. Other quotes (aside from the title) from David Jones, of the BoM’s National Climate Centre include:

“You don’t usually break records by much. You might beat it by point one of a degree or point two.”

“Records being broken by that much [2 degrees C] are just unheard of. You just don’t break records with that kind of margin in a stable climate. It’s an extraordinary event, this one.”

Just want to bring your attention an important item on the calendar – the upcoming planning meeting for the group on Sunday. Pls note the start time is 12 noon (not 2pm as prev posted).

That quote is from R. Buckminster Fuller (1895 – 1983) who was an architect, inventor, visionary and the second president of Mensa. He believed human societies would soon rely mainly on renewable sources of energy, such as solar power.

There’s certainly no crisis of ignorance among those people who signed the solar gross feed in tariff petition! Some of the comments we are seeing on the petition really make us wonder.. “the people of Australia certainly get it; why not the government? What will it take?”.

We’re just about to hit the 7,000 signature mark – lets see how fast we can get to 8,000 and beyond – your signatures and comments will be the massive wake up call our government needs!

The more signatures and thoughtful comments on the petition, the greatly the likelihood policy makers in Australia will take our collective call seriously and Prime Minister Kevin Rudd will choose a solar future for our nation over filthy coal!

You have played a vital role in the future of Australia’s energy security and efforts in the climate change battle, simply by having signed the petition. By taking just a few minutes to spread the word about the petition, you can do even more towards achieving our common goal!

You can forward this email on to friends and colleagues or use the “share” feature on each page of the site, alert the media, use the tell a friend form or even perhaps put up a banner on your web site/blog!

Additionally, we’ve published a press release you’re most welcome to reproduce and redistribute!

Don’t forget to confirm your signature!

After signed the petition, an email would have been sent to you with a link to confirm your signature. If you haven’t done so as yet; please do as it’s only confirmed signatures that we’ll be submitting as part of the final petition.

If the confirmation email isn’t in your inbox, please check your junk mail folder as it may have wound up in there!

Thanks again for your support and interest!