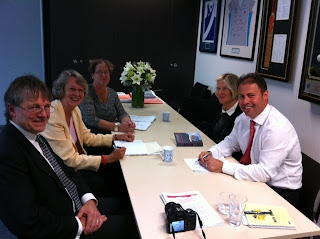 On 1 February 2012 a small group of Lighter Footprints members, including our Convenor, Carolyn Ingvarson, met with Josh Frydenberg, the Member for Kooyong.

Lighter Footprints requested the meeting in response to the front-page story At the edge of disaster in The Age on 28 November which reported that the Arctic permafrost was melting.

We recognised this to be an extraordinarily dangerous development, suggesting the earth is on the brink of dangerous climate change that would be “irreversible on human timescales”.

See also The top of the world is melting, a feature story on the Age published the same day.

Large scale thawing of the permafrost would release vast amounts of greenhouses gases such as methane from frozen organic material stored in the permafrost. It is feared this would set off a self-perpetuating feedback loop would cause global warming to spiral out of human control.

Our main message to Mr Frydenberg was that neither major political party has a policy which is sufficiently responsive to the dire warnings climate scientists are now giving us.

It is quite clear that the earth is more sensitive to greenhouse gases than politicians have understood. These dangerous changes, which include a record melt of Arctic summer sea ice last year, are occurring after less than one degree Celsius of global warming since pre-industrial times.

Our present course of “business as usual” will take us past the two degree “guardrail” that has been agreed on at international negotiations as the level we must stay below to avoid dangerous climate change. The melting of the permafrost is a clear signal that we are already in exceedingly dangerous territory.

We asked for stronger climate change policy from the Liberal Party and for leadership on this issue from Mr Frydenberg who has said that he accepts the science on climate change. He said he and his party were committed to taking effective and immediate action to tackle climate change.

Mr Frydenberg was referred to the David Roberts “Climate Change is Simple” Youtube video and to the article “Climate Change Going Beyond Dangerous – Brutal Numbers and Tenuous Hope” by Kevin Anderson.

We also presented him with a copy of Climate Code Red, the book by David Spratt and Philip Sutton which details the various feedback mechanisms which would tip the climate into escalating warming beyond our control. See our link to the website of the same name on this page.

We may not have agreement with Mr Frydenberg about what constitutes effective action on climate change but we were given the opportunity to fully express our concerns and felt that they were heard.