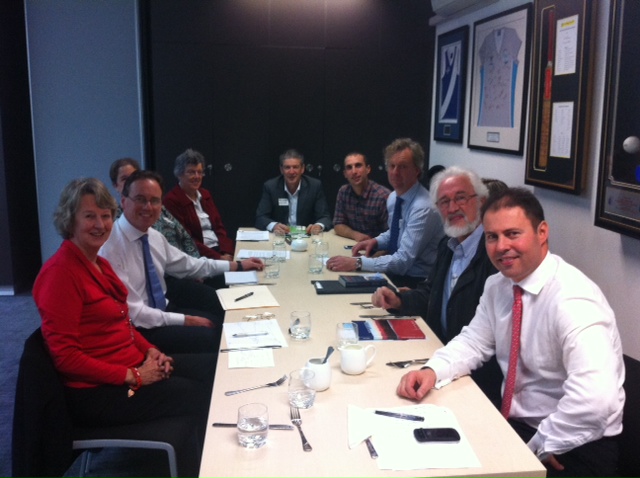 Here is a report of the meeting held on June 7th  in Josh Frydenberg’s office.

Eight members of Lighter Footprints met with Greg Hunt at Josh Frydenberg’s office on Friday 7 June to discuss climate change challenges and actions. Mr Hunt gave generously of his time on his flying visit to the Kooyong electorate and gave us a courteous, lengthy and patient hearing.

We came with a series of issues, concerns and suggestions about how dealing with the challenges of climate change could be more effective.  Did we change Coalition party policy? No, but that was hardly a realistic expectation just before an election. We indicated that our hope was to have a conversation on broad principles that could continue over time, rather than to focus in on the details of the ‘direct action’ policy that we had concerns with. One specific issue we asked about was Mr Hunt’s longer terms views on the Emissions Trading Scheme and whether this may be supported or revisited, even as a domestic policy, and he said no.

We argued for far stronger emission targets than those proposed (5%by 2020), targets closer to those based on the science which tells us the world is on the brink of dangerous runaway climate change which would be irreversible on human timescales. This is a man-made problem and we only have a small window to solve it. We cannot handball the problem to another government or generation, or wait for better economic times.

We highlighted to Mr Hunt the fact that we are already at 400ppm of carbon dioxide equivalent and racing with our foot flat to the floor on the fossil fuel accelerator towards the 45Oppm globally-agreed limit. Climate scientists, the World Bank, the International Energy Agency and PricewaterhouseCoopers are among the many who warn that we are on course to certain catastrophe.

Emissions must peak and begin a sharp descent within the term of the next Federal Government and this decade to give us a slim chance of stabilising warming. What’s worse, the 450ppm limit was never thought to offer us more than a fifty-fifty chance of staying below the agreed safety rail of less than 2 degree of global warming.

Mr Hunt said that he understood the science and had not shifted in his position over many years. His phrase was he ‘gets it’, and he said this many times. Josh Frydenberg confirmed that Mr Hunt argues the science in the party room.

We pointed out that, under the Cancun global agreement, Australia has pledged to make a five per cent unconditional cut to greenhouse emissions by 2020 and if certain conditions were met, Australia would be prepared to lift the target to 15 and up to 25 per cent if the world was moving to stay below the 2 degrees limit.

We noted that Prof.Ross Garnaut has recently argued that sufficient global action has taken place to justify Australia moving to a target of 17 per cent cuts in emissions by 2020.

In turn, Mr Hunt reminded us that the Coalition had given bipartisan support to these targets which helped create the political space for this to happen. We acknowledge his record on this and other matters such as the establishment of the Renewable Energy Target which we very strongly support.

Mr Hunt gave no undertaking that emissions targets would be increased but said the existing 5 per cent cut in emissions would be easily reached by 2020 under the ‘direct action’ policy, saying that we had to proceed step by step. He said it is easier to take the next step once the 5% targets are achieved.

Mr Hunt said he was committed to the 20 per cent renewable energy target but gave no undertaking regarding the current gigawatt hours commitment. (These may be greater than 20 per cent if electricity usage continues to fall.)

On representing Australia internationally, we noted that Mr Hunt saw an enhanced role for Australia in international negotiations due to the fact that Australia will chair the G20 in September 2014. We encouraged him to push for stronger targets in that context. In addition he saw big potential in the G4 group. He disagreed with our assessment that this forum would have little time for a small country like Australia.. On China, he saw they would increase their coal use beyond the levels quoted by Garnaut, and that pollution was the factor most likely to contain it. In terms of international aims he was particularly keen to work to save rain forests around the world, driven both from a climate change perspective and an environmental one. He hoped his government would be remembered for enduring work achieved in this arena.

Other matters discussed included our view that it is the personal responsibility of all of our elected representatives to secure climate safety given that scientists have been warning for decades of the dangers of unrestricted fossil fuel use.

The need for longer term planning beyond 2020 also came up, as well as our concern that there is no funding source for emission cuts other than taxpayers’ pockets, given the planned abolition of a price on carbon. This makes funding targets commensurate with the science more difficult, and vulnerable to budget constraints.

Lighter Footprints also expressed the view that given the necessary and inevitable transition to renewable energy, Australia should move to exploit its bountiful clean energy resources and expertise, including the need for big solar projects and fewer restrictions on wind farms. He did not disagree, He was interested in the hydro pumping potential of the Great Australian Bight- highlighted in Peter Seligmans’ book, and recognised the role of hydro as very high in the mix of renewables.

On wind, Mr Hunt said he knew of no evidence that wind farms cause harm and has received flak for this view, but he also maintained that those who believed they were, or might be, affected had the right to express their views and that further research was justified. Our view remains that this is unwarranted, given that much research has already been done and that it is virtually impossible to prove a negative. Endless calls for further research from those who wish to stall and prevent wind farms, including those who have a financial interest in doing so, should not be entertained.

Mr Hunt said the Coalition commitment to an additional million rooftop solar installations would help those on low incomes. We raised the issue of the existing impediments for landlords in installing rooftop solar and offered to provide more information about this.

Many other points were made, including our view that many members of the Conservative parties indicated little support for action on climate change as exemplified by their use of the phrase, ‘climate is always changing’.  He agreed it was a statement he had heard, but the party position is clear. We suggested to Mr Hunt that given the dire warnings by climate scientists and the limited time for action, now was the time for our leaders to be bold in their actions and efforts.

In summary, we felt that our major concerns were given a fair hearing and we gained a better understanding of Mr Hunt and the Coalition’s view on matters that so greatly concern all of us. We offered to support him in achieving stronger action on climate change and asked him to let us know what we could do to help.

We thanked Kooyong MP Josh Frydenberg for organising the meeting, and providing us with lunch and with this welcome opportunity.