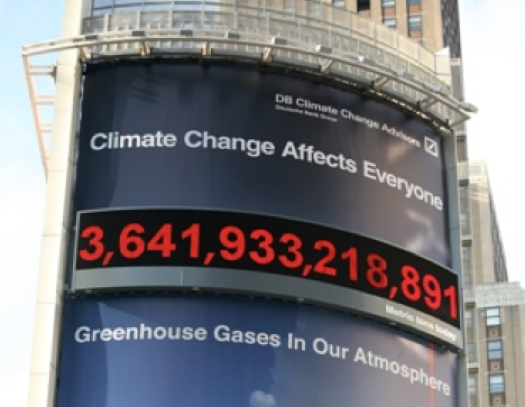 In March the biggest climate conference of the year took place in Copenhagen: 2500 participants from 80 countries, 1400 scientific presentations. Last week, the Synthesis Report of the Copenhagen Congress was handed over to the Danish Prime Minister Rasmussen in Brussels. Denmark will host the decisive round of negotiations on the new climate protection agreement this coming December.

The climate congress was organised by a “star alliance” of research universities: Copenhagen, Yale, Berkeley, Oxford, Cambridge, Tokyo, Beijing – to name a few. The Synthesis Report is the most important update of climate science since the 2007 IPCC report. [ … ]

From a natural science perspective, nothing stops us from limiting warming to 2ºC. Even from an economic and technological point of view this is entirely feasible, as the report clearly shows. The ball is squarely in the field of politics, where in December in Copenhagen the crucial decisions must be taken. The synthesis report puts it like this: Inaction is inexcusable.’

Read the full blog posting with links to other material at RealClimate.

Updated in real time, using projections from monthly measurements of CO2 and other greenhouse gases by Massachusetts Institute of Technology, the Carbon Counter is designed to get everyone to reduce their emissions.

Kevin Parker, the global head of Deutsche Bank’s asset management division, which put up the 21-metre sign, said: “Carbon in the atmosphere has reached an 800,000-year high. We can’t see greenhouse gases, so it is easy to forget that they are accumulating rapidly.”

Yesterday the counter, which uses 40,960 low-energy LEDs and carbon-offsets its electricity usage, gave a figure of 3.64tn tonnes.

Senator Christine Milne: the Climate Nightmare is upon us

This may go down as a landmark speech on the state of our planet. Not just on climate change but the bigger picture too.

Being given today at the National Press Club: http://www.crikey.com.au/2009/06/17/milne-the-climate-nightmare-is-upon-us/

Significant new report on climate impacts in the US

Opening salvo in the Obama adminstration’s attempts to steer a new course on climate change in said country? He’s in the ship’s control room, now he has to wrestle to get his hands on the helm.

How to shut 93% of coal without building new plants

In the USA, more MW are generated by gas than coal power stations. (MWh is another story.) As Sean Casten’s story from Grist asks, ‘When it runs, the natural gas fleet emits just 50% of the CO2 of the coal fleet, which raises a rather interesting question: what would we have to do to make it run harder? And how big a difference would that make in our national CO2 footprint?’ Wonder what the gas vs coal breakdown is in Australia.

‘Roofs make up 21% of the area of Toronto, so it is logical that they should be put to good use. Now they will be green; by a stunning 36-2 vote, council approved new rules that require green roofs on residential buildings next year and on industrial buildings in two years. Like most good legislation, people at both ends don’t like it; Steven Peck of Green Roofs for Healthy Cities says in the Globe and Mail that “We would have liked it [the Toronto bylaw] to be more aggressive,” while the real estate industry lobby group says Cost is an issue,The market is so price-sensitive now.” ‘ Read the rest of this post from Treehugger. Listening, Mr Doyle?

Animals have been used as bio-indicators since canaries were taken down into coalmines (and probably long before that.) Now there is increased concern about the impact on animal and plant species of climate change, there are numerous projects and studies focused on biodiversity.

All these stories from the BBC Science and Environment web page (RSS feed).