IEA’s massive about-face, Big Oil’s bad week, and a landmark win for our kids on climate

The world’s premier energy agency, the notoriously conservative International Energy Agency (IEA), has just released a landmark report that marks a huge shift in approach, setting out “an ambitious global energy  roadmap” to reach net-zero by 2050.

Of great significance to Australia is the IEA’s finding that this year, 2021, is the year to cease “any new oil and gas fields, as well any new unabated coal plants” according to NPR. “By the end of 2025, new sales of fossil fuel boilers should be phased out,” it says 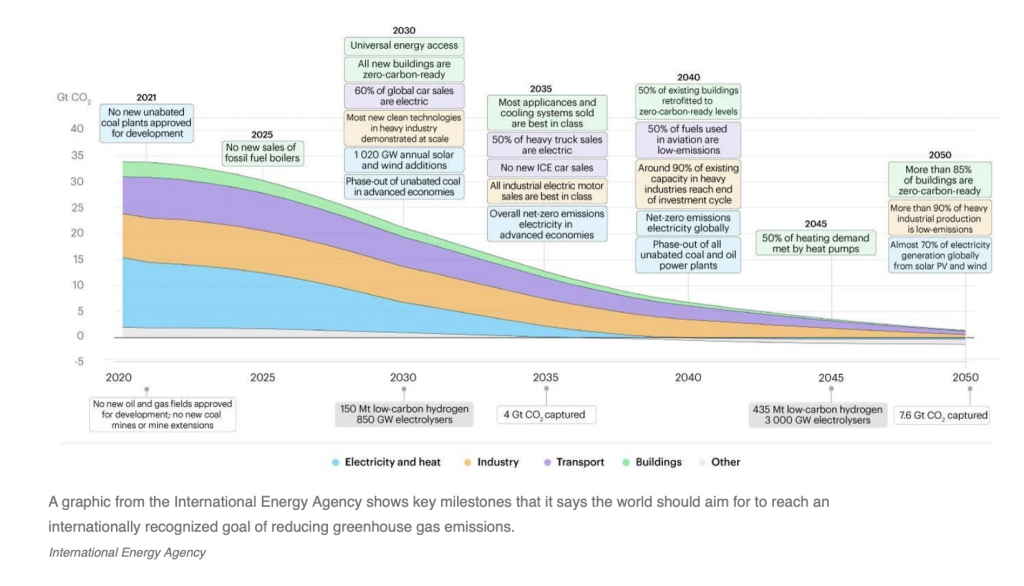 The IEA stakes out a bold position with the report’s stirring initial sentences: “The energy sector is the source of around three‐quarters of greenhouse gas emissions today and holds the key to averting the worst effects of climate change, perhaps the greatest challenge humankind has faced. Reducing global carbon dioxide (CO2) emissions to net-zero by 2050 is consistent with efforts to limit the long‐term increase in average global temperatures to 1.5 °C. This calls for nothing less than a complete transformation of how we produce, transport and consume energy.”

Australia however has just doubled down on its support for fossil fuels by looking to delay the transition away from coal-fired power stations and looking towards a massive expansion in gas extraction with its five basins plan, so much so, that potentially any resulting  in Australia’s emissions could have severe consequences on a world scale –  as The Australia Institute states: “Australia’s existing pipeline of 22 gas projects, along with identified and prospective gas resources, could emit up to three times the annual world emissions.”

The IEA calls for action: “The global pathway to net‐zero emissions by 2050 detailed in this report requires all governments to significantly strengthen and then successfully implement their energy and climate policies.”

It is clear that Australia will become increasingly stranded as an internationally despised climate laggard, moving from market to market as the world pivots to clean energy and electrification accelerates throughout this coming decade.

Our major trading partners are accelerating their shift to net-zero, and are looking towards carbon disclosure, reducing carbon risk and imposing carbon border tariffs. It is time for us to begin the shift to electric and low carbon transport in earnest, forget about gas expansion plans, and look to our strengths. With some of the best renewable resources in the world, we should be exporting clean electrons directly or in liquid form.

In “Net Zero by 2050”,  the IEA states that the energy sector is the major source of global emissions and so the sector holds the key to responding to the world’s climate challenge. Furthermore, it states that the gap between rhetoric and action needs to close if we are to have a fighting chance of reaching net zero by 2050 and limiting the rise in global temperatures to 1.5 °C.

The IEA claims that their report is the world’s first comprehensive study of how to transition to a net-zero energy system by 2050 while ensuring stable and affordable energy supplies, providing universal energy access, and enabling robust economic growth.  For more details check out this comprehensive presentation as the IEA launched the report.

The IEA pathway has less reliance on carbon capture and storage, energy-related CO2 removal and bioenergy supply than most IPCC scenarios. 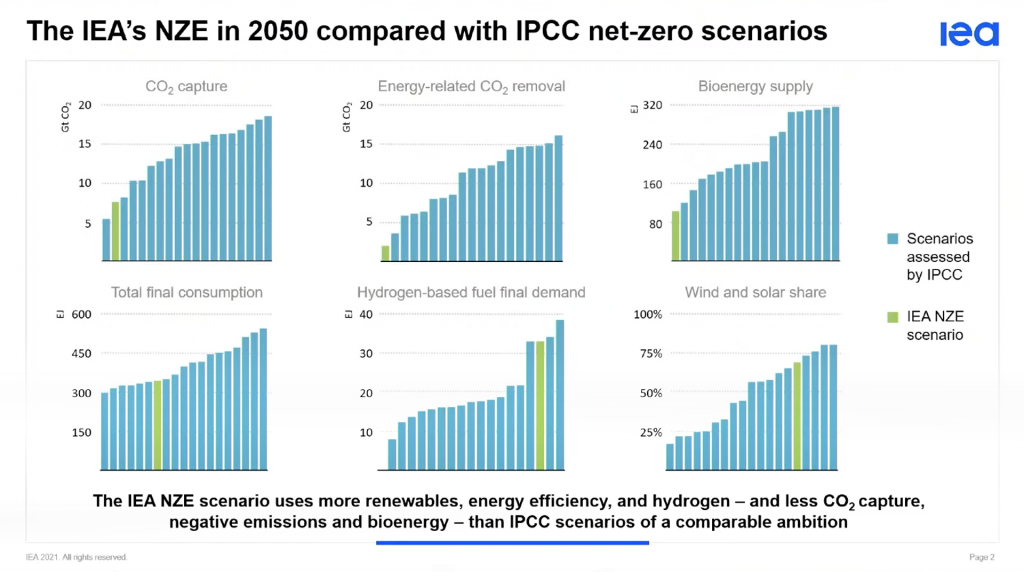 The report acknowledges the current gap between rhetoric and reality on emissions, and produces a Roadmap that shows that there are still pathways to reach net zero by 2050.

However, the pathway remains narrow and extremely challenging, requiring all stakeholders – governments, businesses, investors and citizens – to take action this year and every year after so that the goal does not slip out of reach. 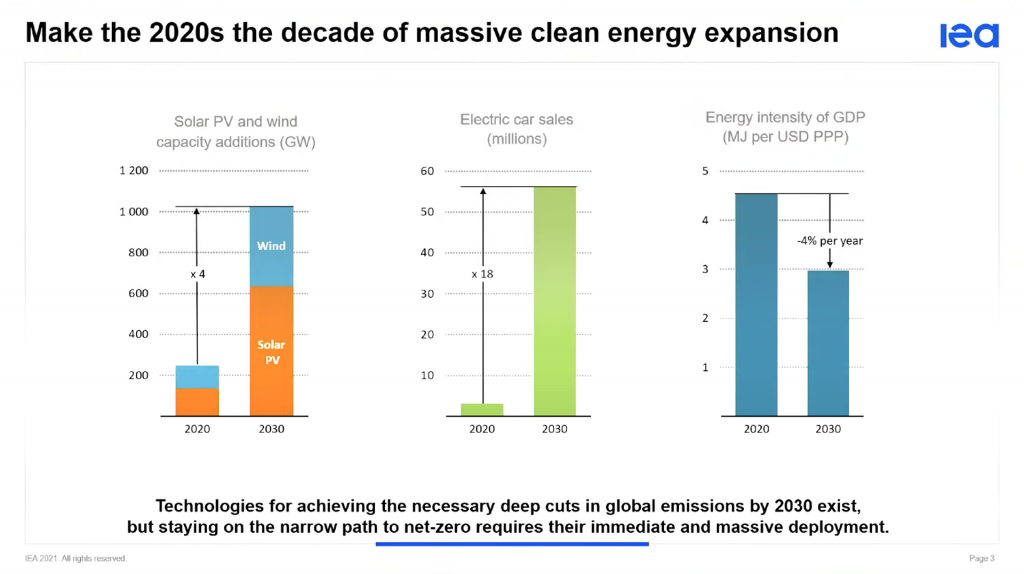 This report sets out clear milestones – more than 400 in total, spanning all sectors and technologies – for what needs to happen, and when, to transform the global economy from one dominated by fossil fuels into one powered predominantly by renewable energy like solar and wind. 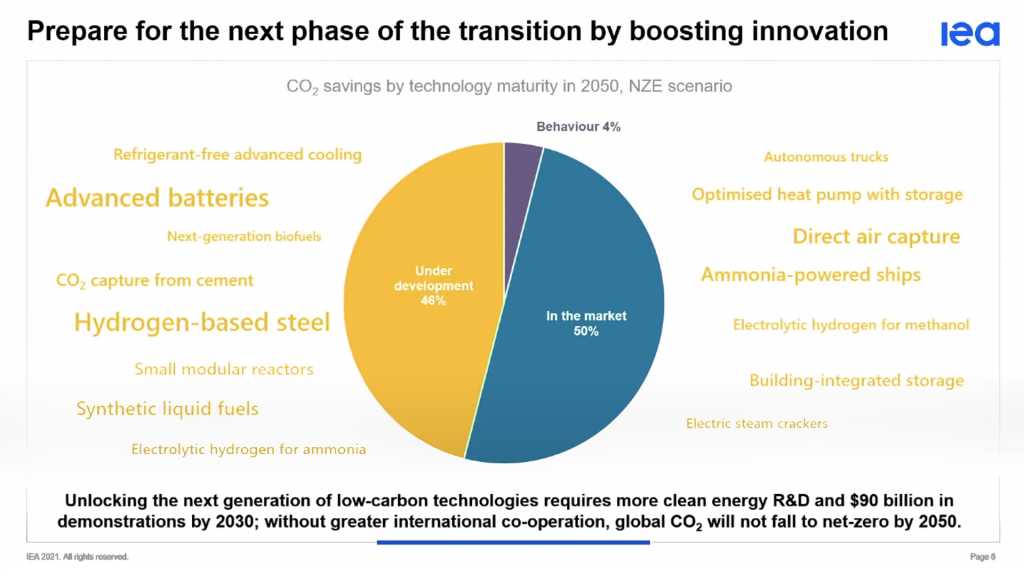 The International Energy Agency (IEA) is a Paris-based autonomous intergovernmental organisation.  It has 30 member countries and 8 association countries and its mission is to shape a secure and sustainable energy future for all.

The IEA was created in 1974 to ensure the security of oil supplies.  It has evolved over the years. While energy security remains a core mission, the IEA today is at the centre of the global energy debate, focusing on a wide variety of issues, ranging from electricity security to investments, climate change and air pollution, energy access and efficiency, and much more.

The G7, late on the second day of debate, agreed on Friday 21st May “to end their financial support for coal development overseas, in a major step towards phasing out the dirtiest fossil fuel” reports Fiona Harvey for the Guardian. Here we have Australia’s major trading partners bar China, “all reaffirmed their commitment to limiting global heating to 1.5C, and committed to phasing out coal and fully decarbonising their energy sectors in the 2030s.” 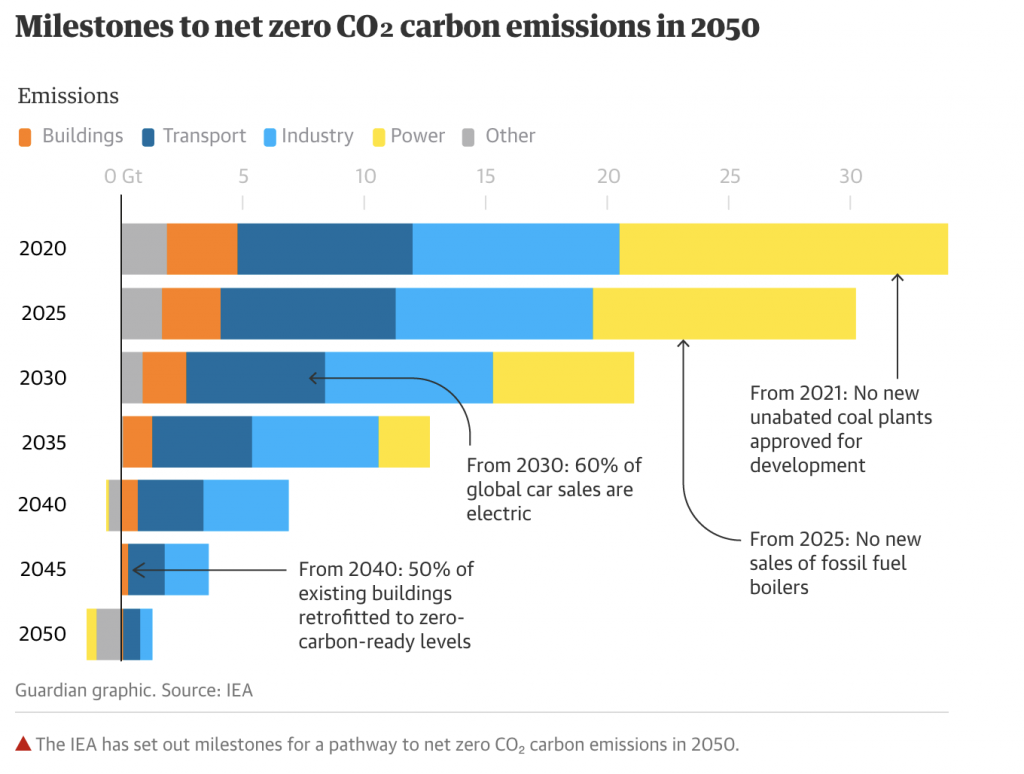 That the UK, the US, the EU, France, Italy, Germany, Canada, and eventually Japan have agreed to cease financing new coal, comes on the back of IEA’s landmark report, and has significant implications for Australian exports.

The IEA report was quickly followed by shareholder revolts and a landmark court victory.

The Dutch Court decision to force Shell to reduce its emissions by 45% by 2030 also included its downstream emissions reports the BBC, and makes it clear that the industry can be held accountable on human rights grounds. The decision has the potential to accelerate a wave of climate litigation across the globe.

Exxon’s largest shareholder, BlackRock, is understood to have supported the successful campaign by dissident shareholder group Engine No 1 to oust Exxon Directors, reports The Guardian. ”Exxon’s diminutive rival was set up last year as an impact investment firm by veteran hedge fund tech investor Chris James in an attempt to replace four Exxon board members with directors who have “experience in successful and profitable energy industry transformations”. The conventional wisdom is that it requires at least 3% to shift a corporate, but this tiny hedge fund ousted two Directors with a bare $54 million in holdings.

“There is no doubt that this week’s news has been not so much a shot across the bows as a direct hit to the hull of Big Oil,” says Mark Lewis, the chief sustainability strategist at BNP Paribas Asset Management, as reported in The Guardian. “They will have to recognise now that no amount of patching up the hole will do; shareholders and society want the vessel completely overhauled … Within days of the oil industry’s ‘Black Wednesday’ reckoning, credit rating agency Moody’s warned that the credit risk of major oil producers had increased.” Oil and gas returns have been poor in the last decade, and it is likely that the industry will face increasing pressure from frustrated shareholders.

A landmark decision – Australian teenagers are owed a Duty of Care

Eight teenagers and a nun have been awarded a world-first decision, where Federal Court Justice Bromberg found that the environment minister “had a duty of care to not act in a way that would cause future harm to younger people”, reports The Guardian. “That duty says that the minister must not act in a way that causes harm – future harm – from climate change to younger people,” said David Barnden, a lawyer representing the children, outside court. Although the Court stopped short in blocking Whitehaven Coal expansion, the parties have been ordered to make further submissions on duty of care in the context of the coal mine expansion.

Izzy Raj-Seppings is just 13, and has a great deal to lose from the climate crisis. She is one of eight Australian teens bringing this class action, reports Reuters. “I definitely have hope because if you look around you can see all the incredible climate activists – young and old – all these people fighting for what’s right. We are making change.”