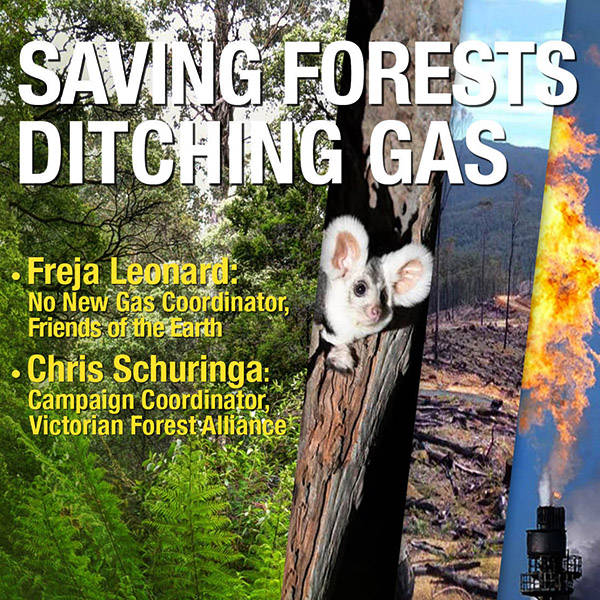 Two major environmental concerns leading up to the November state election for friends and members of Lighter Footprints are stopping logging in Victoria’s forests and getting off gas.

On Wednesday 28 September, Lighter Footprints welcomed Chris Schuringa, the campaign coordinator for the Victorian Forests Alliance, and Freja Leonard, the No New Gas Coordinator for Friends of the Earth. 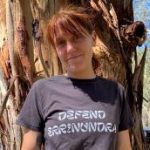 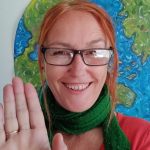 Collectively, the Victorian Forests Alliance has decades of experience working with local communities. Its mission is to protect and restore native forests across the state.

Apart from being the largest flowering tree, Victoria’s Ash forests are some of the best in the world at storing carbon in tonnes per hectare.

They also provide vital habitats for many of Victoria’s endangered species. Over 2,000 species, communities and threats are currently listed under the Flora and Fauna Guarantee Act 1988. 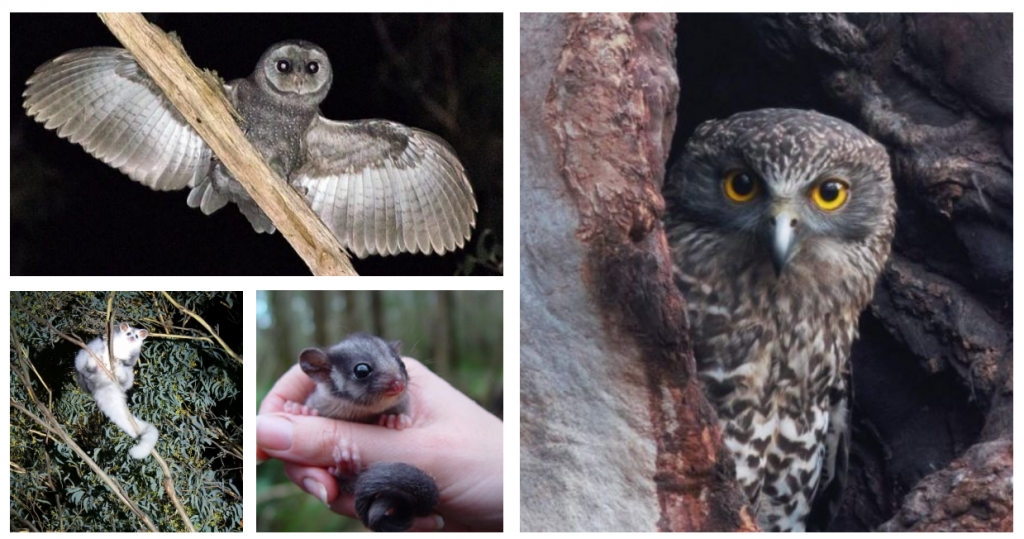 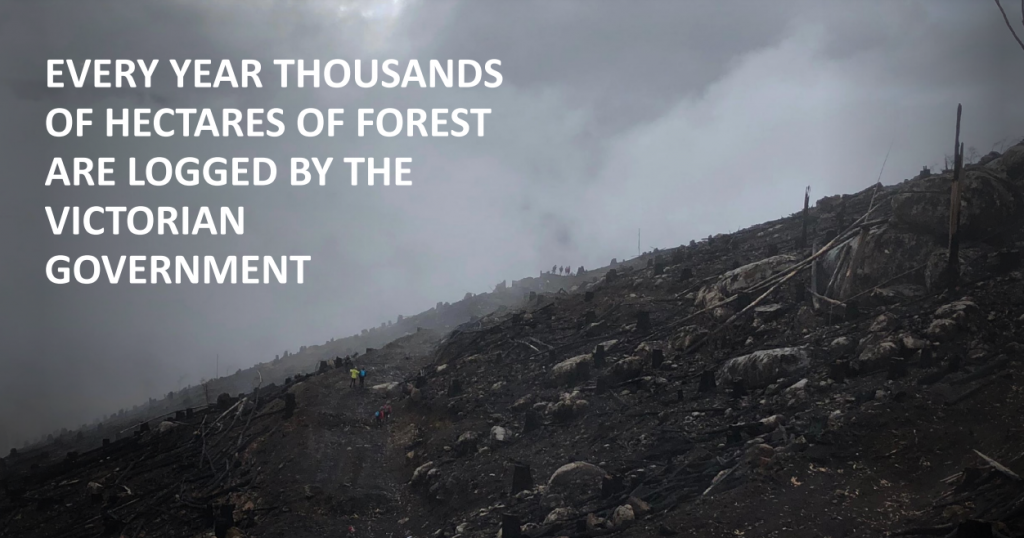 Sixty per cent of the biomass is left behind and burnt, releasing carbon into the atmosphere and lowering air quality in neighbouring communities. 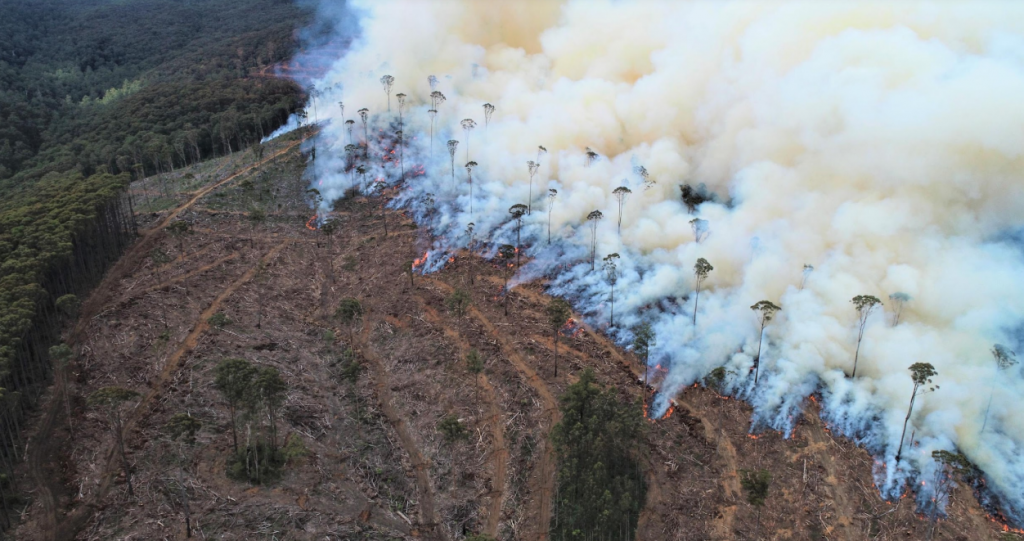 The devastation from the air is horrific.

Victoria is the most cleared state. The orange areas have been recently logged while the red areas are to be logged in the future.

Of the 40 per cent that is harvested, most (85 per cent) is pulped for paper and cardboard and 10 per cent is made into pallets. The small remaining per cent ends up as flooring, decking and some structural timber. See also Ellen Sandell’s excellent video here. 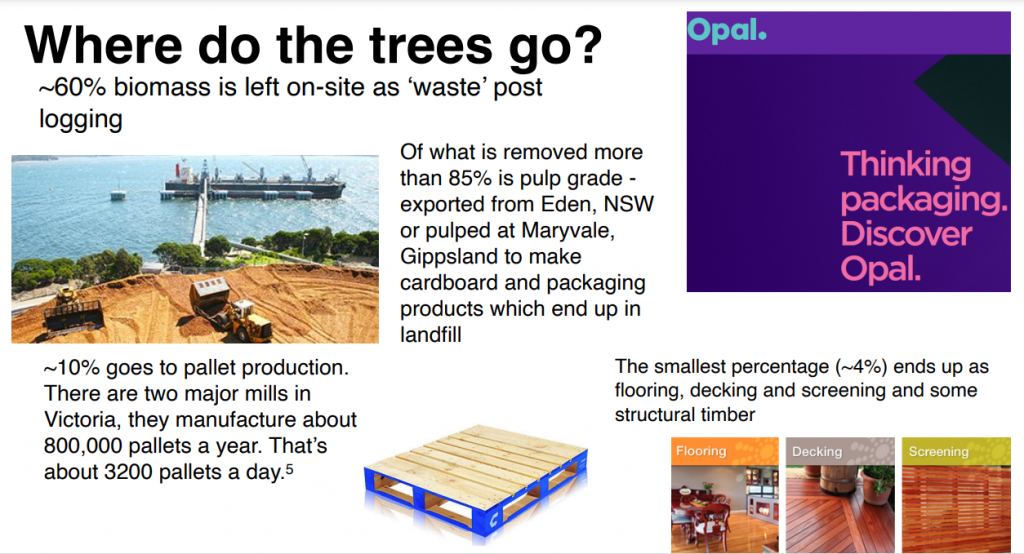 Despite millions of dollars in taxpayer subsidies, VicForests made a loss of about $20 million in 2021. It is unsurprising that support for the logging of native forests in Victoria is low. 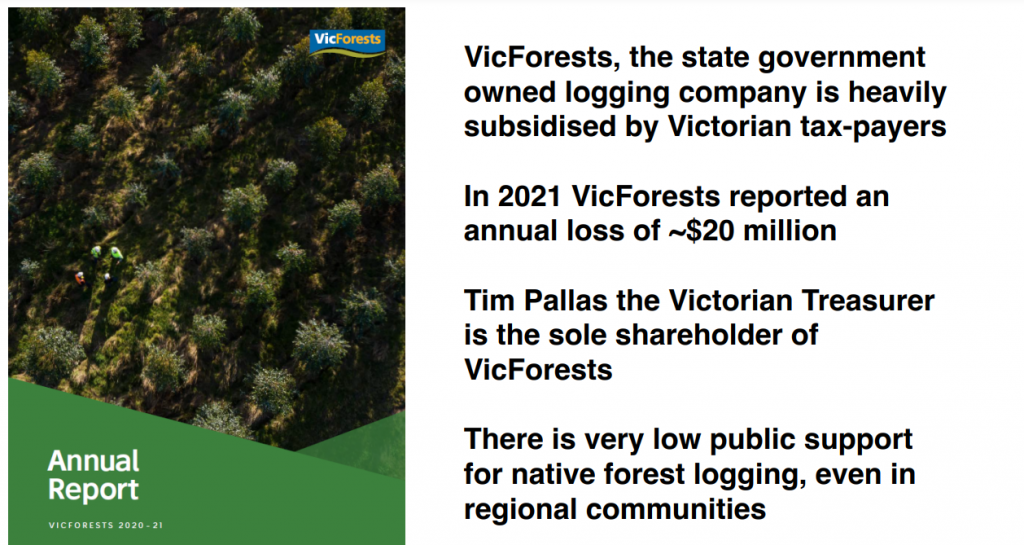 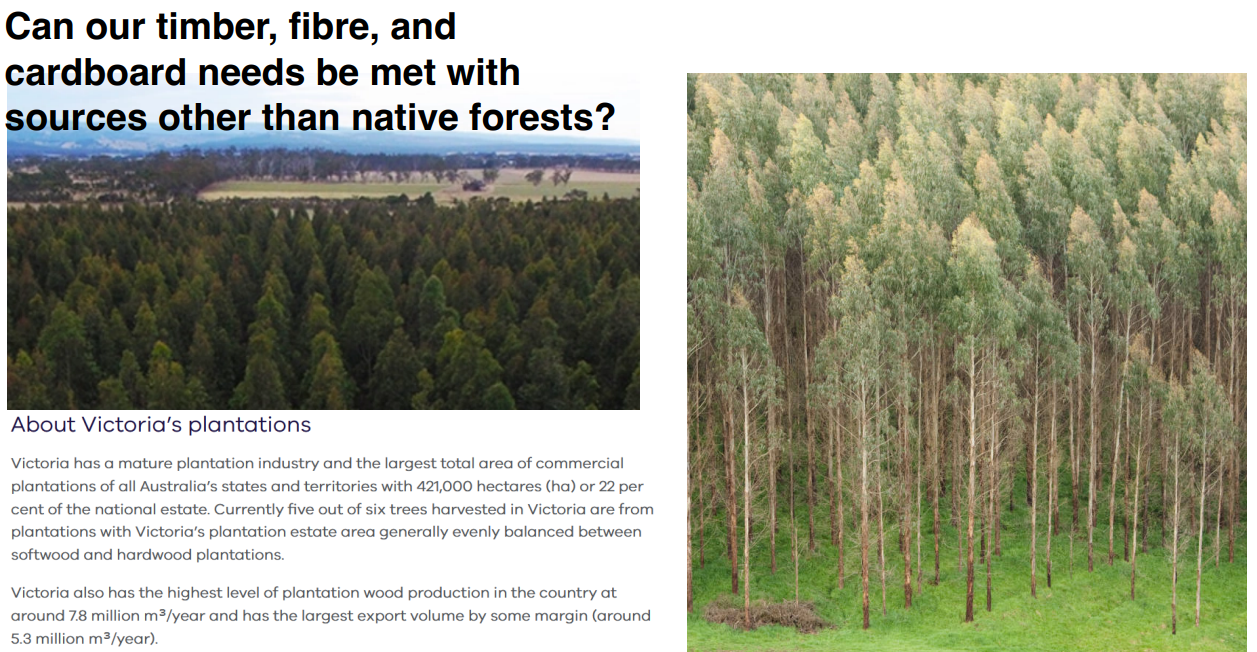 We cannot wait until 2030 to end the logging of Victoria’s unique native forests. And it is Liberal Party policy to reverse the 2030 decision. The coming election is critical. 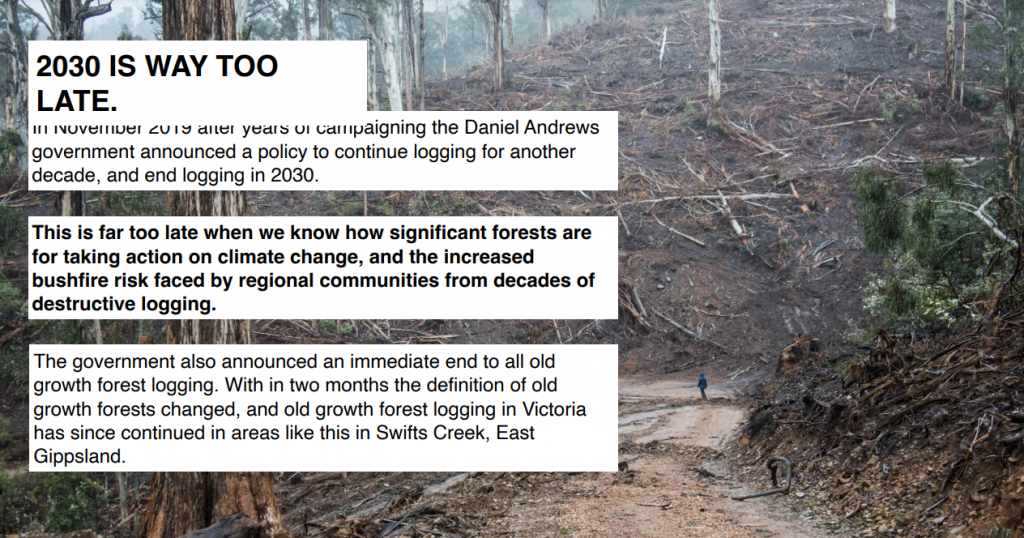 Community groups are working hard to let candidates know that logging must stop. You can too. 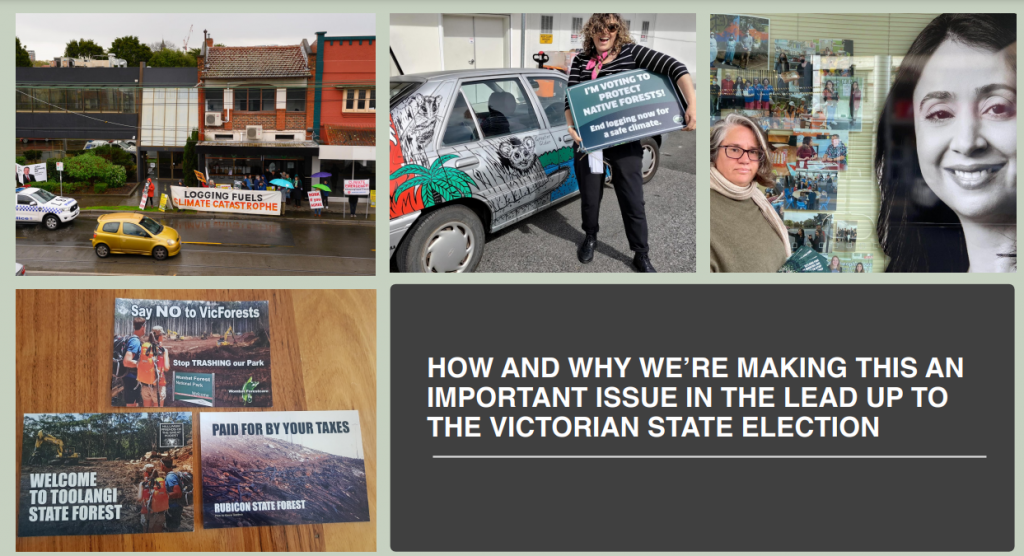 Get a sign on your fence. Get involved with the Victorian Forest Alliance or Lighter Footprints or both. 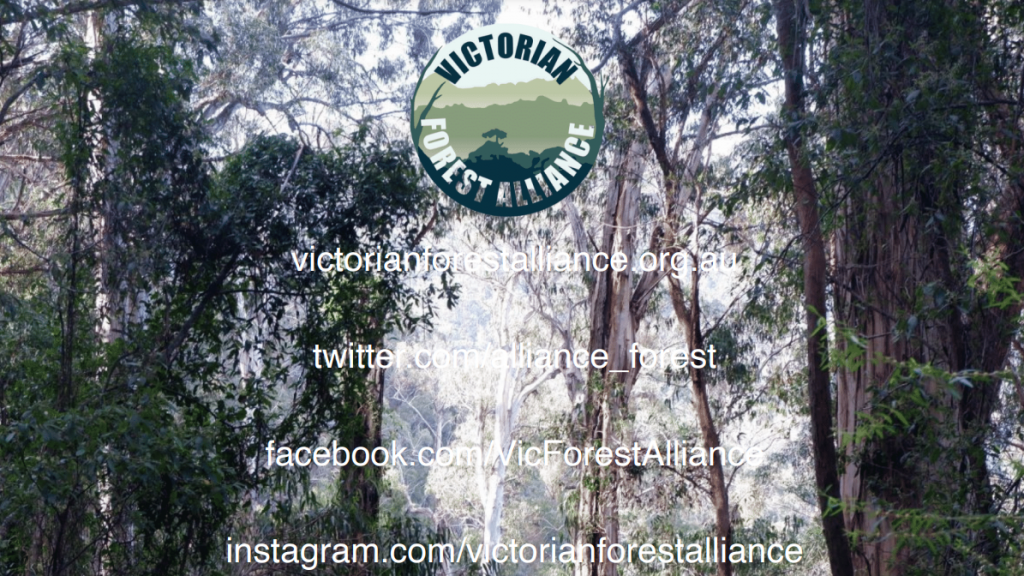 How to find the Victorian Forest Alliance

In 2018, the Victorian Government released five new oil and gas exploration blocks off the Otway coast, stretching west to the South Australian border. It is in this context that the No New Gas Working Group was established at Friends of the Earth Melbourne. The group aims to pressure the Victorian government to heed the community’s opposition to gas.

Since then, the Albanese government has released offshore petroleum exploration permits opening up nearly 47,000 sq km of Australian waters to oil and gas exploration. There are ten new areas stretching from the Ashmore and Cartier Islands in the Indian Ocean to Victoria’s Gippsland basin.

The No More Gas Collective brings together people who will be immediately impacted by any new fossil gas expansion and builds networks of solidarity from the city to the country! 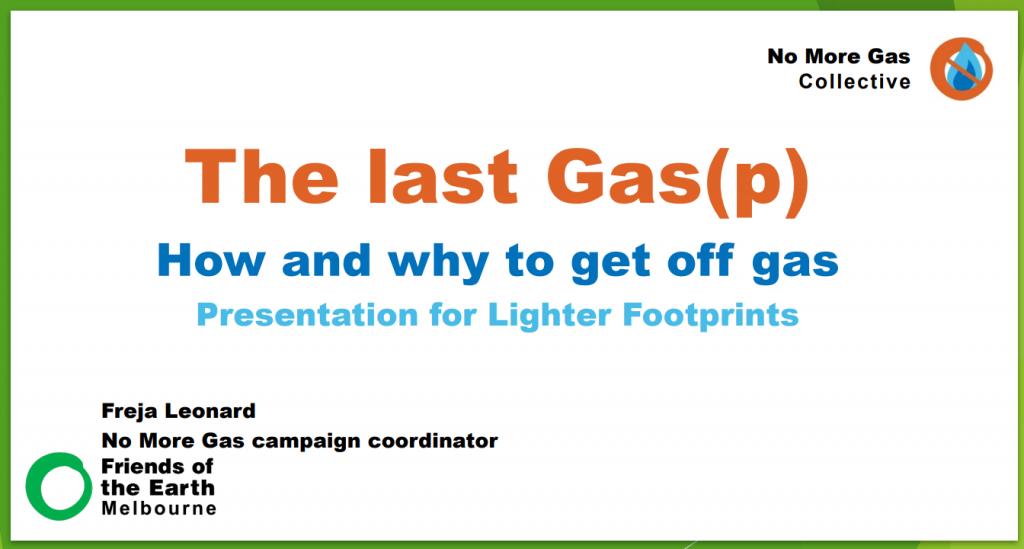 Gas is primarily methane and is a far more potent greenhouse gas than carbon dioxide. It’s not just bad for the climate, it’s also dangerous and bad for our health. 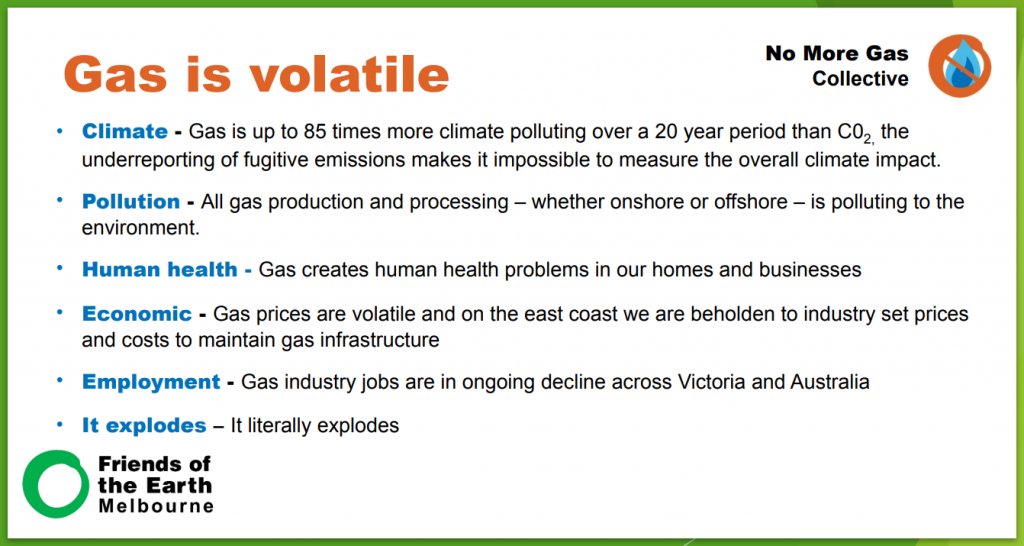 The Victorian and new Labor federal governments have both opened up new waters for gas exploration. This includes waters near the iconic Twelve Apostles National Park in Victoria. The Climate Council has a map here but since the map was created, the federal government has announced it will allow the oil and gas industry to explore new offshore sites covering 46,758 square kilometres of Commonwealth waters.

Offshore exploration requires seismic blasting which incredibly emits 250 decibels every 10 seconds 24 hours a day for months. Whales, dolphins and other marine mammals use high-pitched sound waves to locate food and communicate with members of their pods. If they can’t hear, they will have a hard time finding food and staying in touch with other members of their community.

A deaf whale is a dead whale.

Residents of Tasmania’s King Island, in Bass Strait, are opposing planned seismic testing about 27km off its coast. A survey by the Wilderness Society found that 96 per cent of King Island residents oppose the sesismic testing. There is a petition you could sign here. 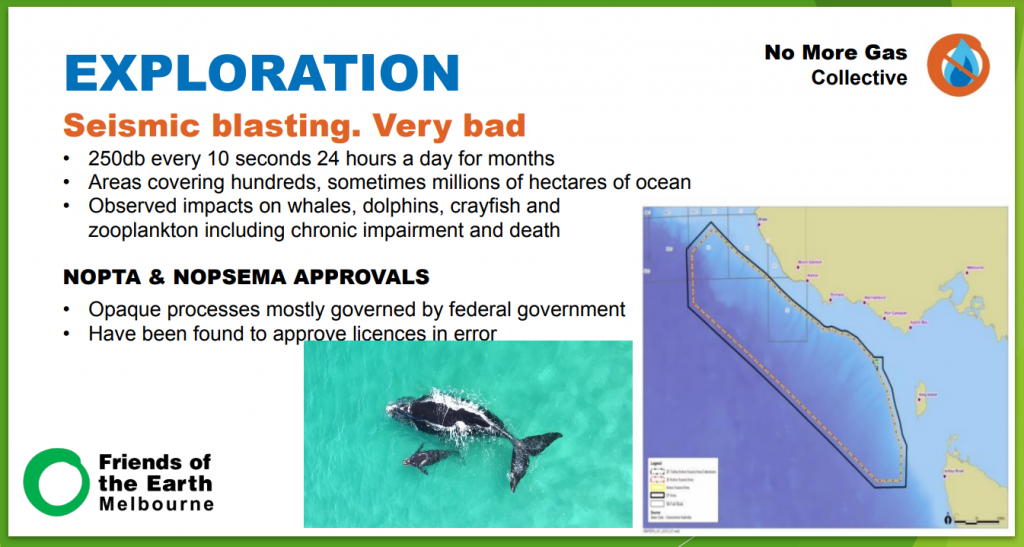 After the seismic blasts, gas extraction is polluting. The ocean is under enough stress from plastic pollution, warming and acidification from the absorption of excess carbon dioxide in the atmosphere. 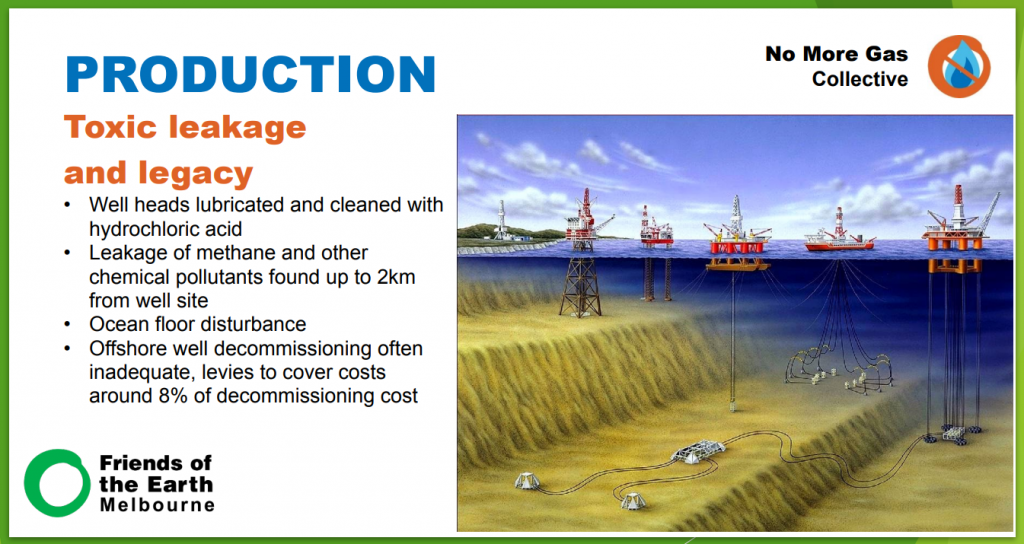 This map shows the gas pipeline network for Victoria. Leakage of methane occurs at all stages of gas exploration and in gas pipeline and appliance systems, but it is not well measured. It is harder to detect offshore. The Victorian Greenhouse Gas Emissions Report
2019 estimated that almost 77% of fugitive emissions in Victoria arise from losses involved in the production, transmission, storage and distribution of natural gas. 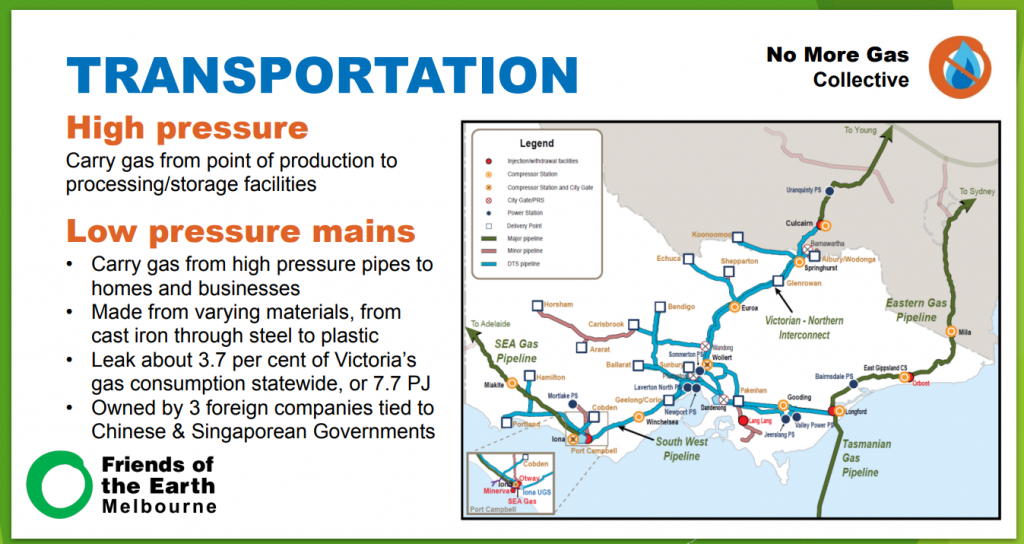 Victoria uses more gas, particularly in the residential sector, than any other state or territory. Almost all (80 per cent) of Victorian households are connected to gas. In 2020, for example, Frontier Economics reporting for the Australian Energy Regulator found that Victoria consumed 50 Gigajoules of gas compared to NSW’s 18 Gigajoules. Victoria’s Gas Substitution Roadmap is a first step and a plan to get Victoria off gas. The Coalition’s focus appears to be on supply and price. 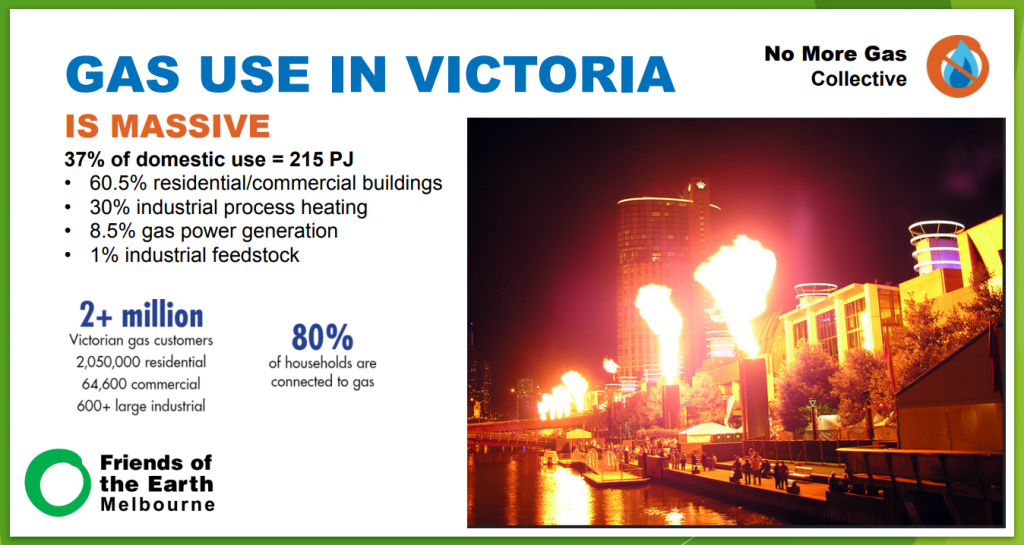 The adverse effects of gas in the home on health are of increasing concern. According to Doctors for the Environment, lower-income households using older gas appliances are more at risk. This is an equity issue. 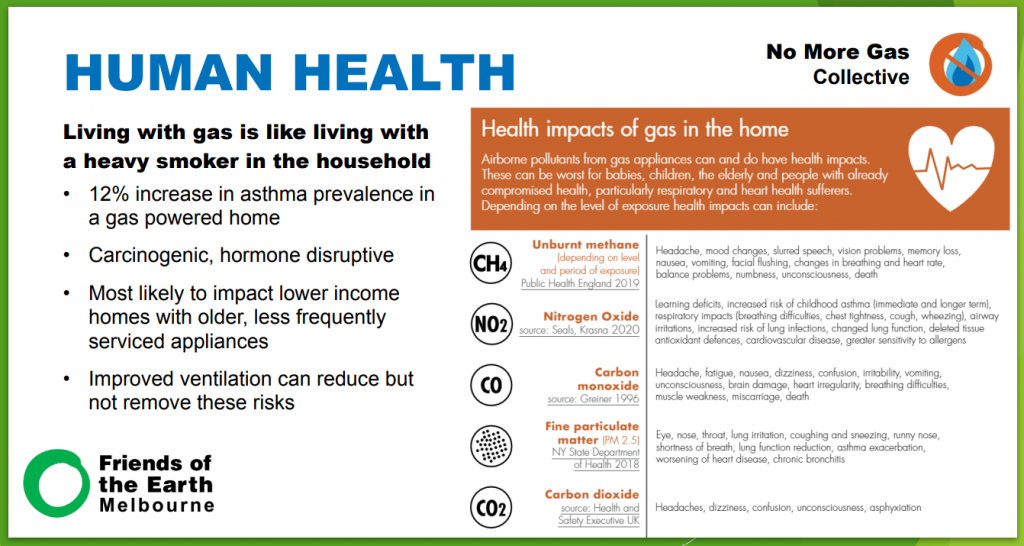 Apart form Western Australia, domestic gas prices are tied to international gas prices. The war in Ukraine has reduced supply in Europe pushing up prices. Meanwhile, the international companies exporting Australia’s gas are earning record profits while paying no company tax. The UK and the EU have introduced a levy/tax on windfall profits and will use the collections to offset consumer costs. GetUp has a petition here calling on the federal government to introduce a windfall tax that you could sign. 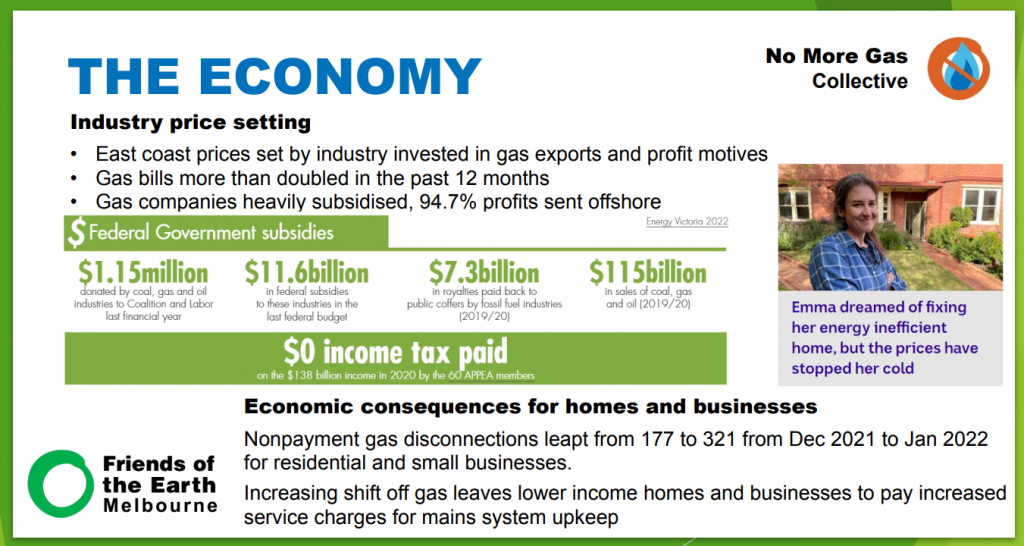 An important part of a successful energy transition is ensuring that emerging clean energy jobs are good jobs. The ACTU recently released a major report outlining the potential for Australia to create thousands of secure renewable energy jobs with good conditions. It is working with the renewable energy industry towards a shared understanding of what best practice employment standards look like for renewable energy projects. The report, Sharing the Benefits with workers: A decent jobs agenda for Australia’s renewable energy industry, is here. Unions and the Business Council of Australia have joined a growing chorus of voices calling for a national Energy Transition Authority to plan and coordinate the change. It seems the federal Labor government is yet to commit. Environment Victoria is calling for a Just Transition for the Latrobe Valley. 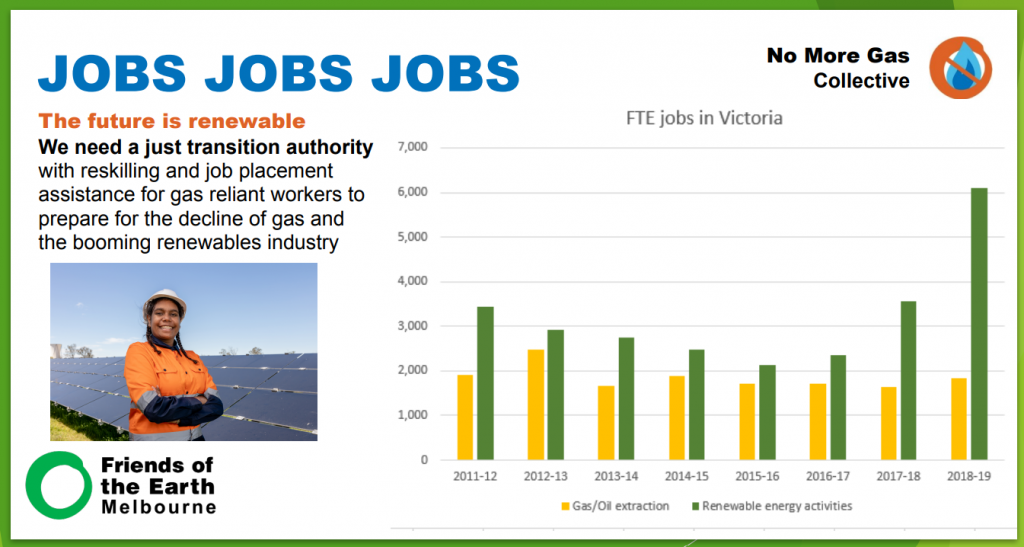 There are problems with hydrogen. Feeding it into existing ageing gas pipelines is not viable because it is a smaller molecule than methane and will increase fugitive emissions. Because hydrogen reacts with tropospheric hydroxyl radicals, emissions of hydrogen to the atmosphere perturb the distributions of methane and ozone, the second and third most important greenhouse gases after carbon dioxide. Hydrogen is therefore an indirect greenhouse gas with a global warming potential GWP of 5.8 over a 100-year time horizon. A future hydrogen economy would therefore have greenhouse consequences and would not be free from climate perturbations. 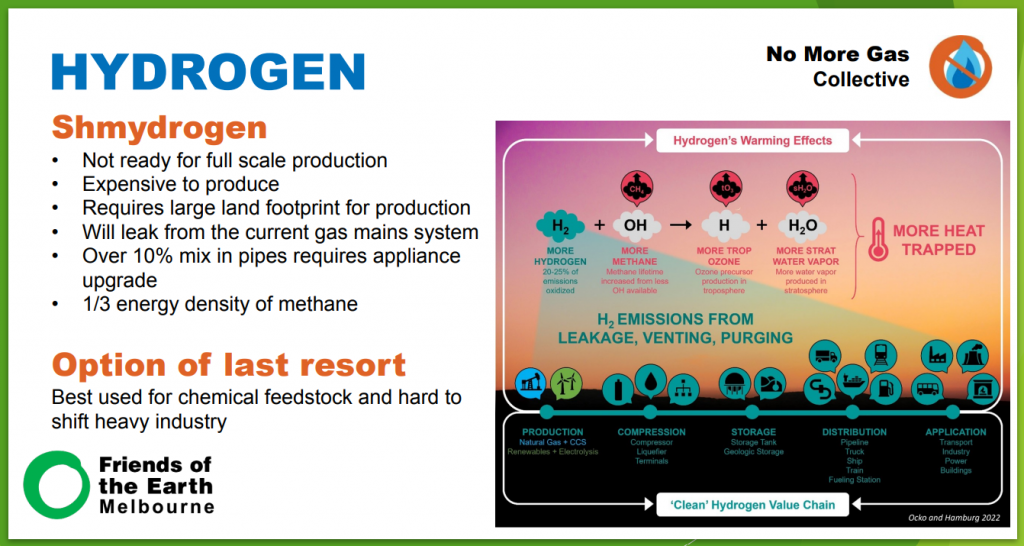 Victoria’s Gas Substitution Roadmap makes a connection to the gas network no longer compulsory, a good step forward. It proposes energy efficiency, electrification, hydrogen and biogas. The latter two are problematic. You can read Environment Victoria’s submission in relation to the Roadmap here.

Its key recommendations were: 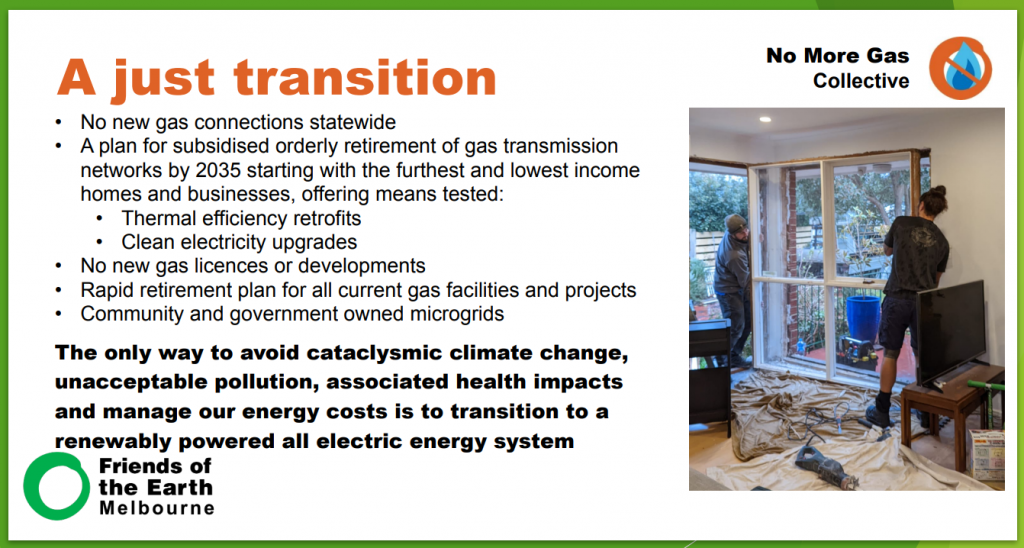 To get off gas, freestanding solar with home batteries, community microgrids and virtual power plants are the preferred way forward. 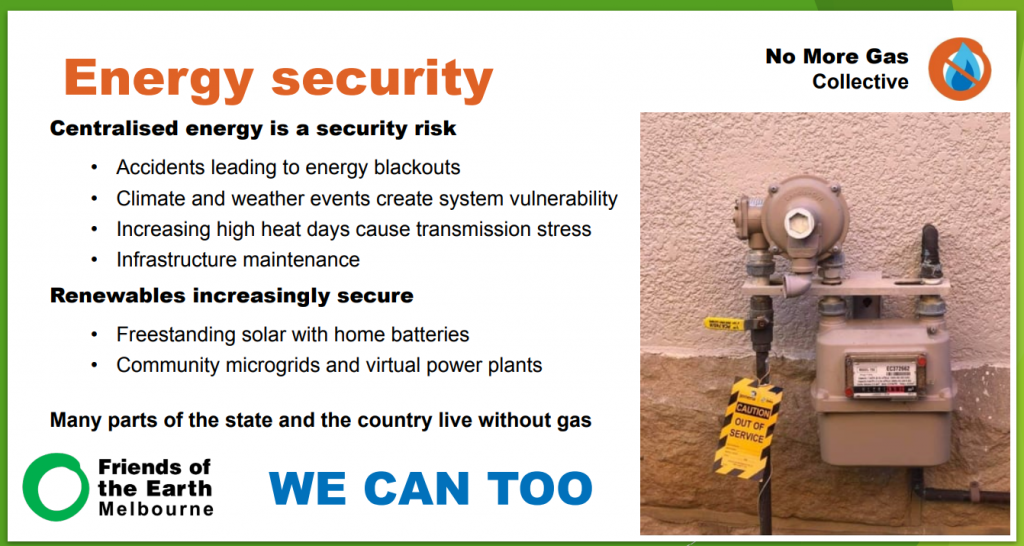 In recent days, there have been significant developments in the gas industry in Australia. Origin sold out of the Beetaloo Basin to redirect investment into renewables generation.

In the Tiwi Islands, Federal Court Justice Mordy Bromberg upheld the claim by Munupi elder Dennis Tipakallipa that Santos and the regulator NOPSEMA had failed to properly consult over access to their Sea Country.

Shareholder pressure and legal challenges are starting to have an effect. Together We Can. 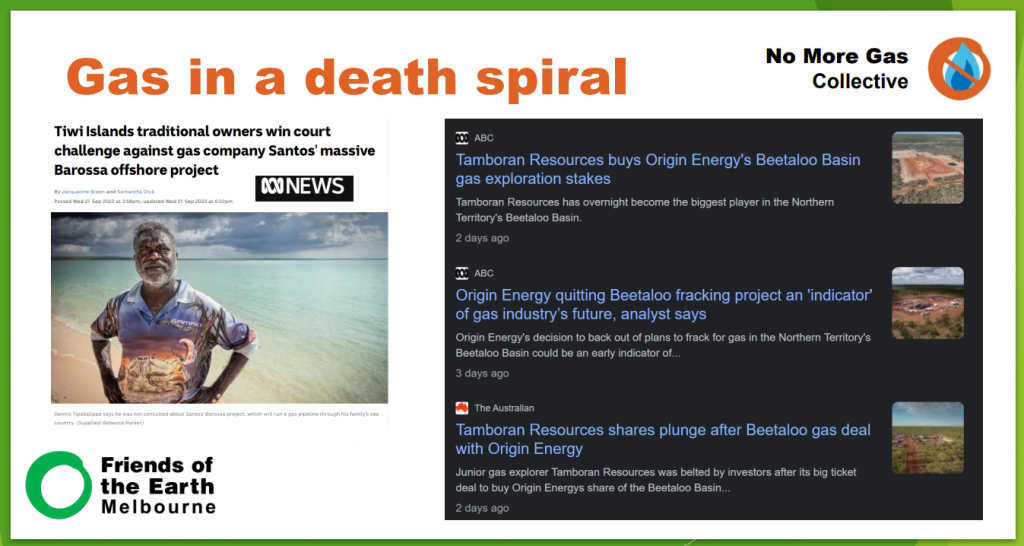 Finding the No More Gas Collective

Read more and support the work of th Collective at https://www.melbournefoe.org.au/gas 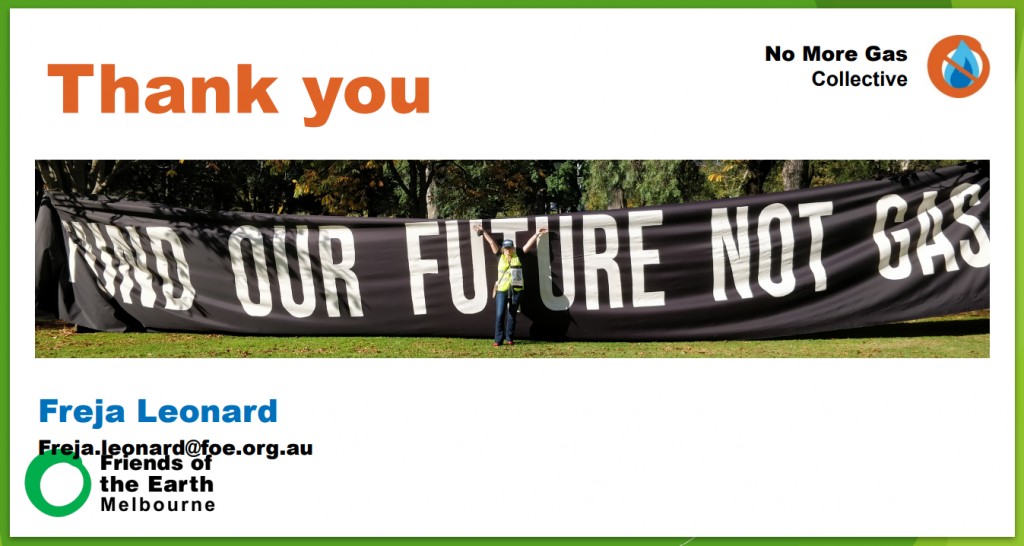 The link to the video recording of the event is here.