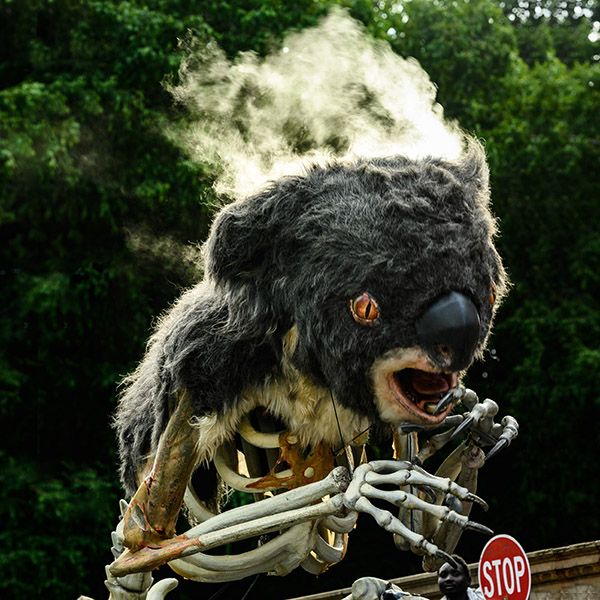 With proposed legislation that includes draconian fines for forest protestors being debated in the Victorian parliament, the Victorian Forests Alliance called a snap protest on the morning of Tuesday 21st of June – check through images of the action here and their summary of the issues here.

Protestors in forests face $21,000 fines or could be incarcerated for up to a year.

We need to end native forest logging by 2024.

Email and call these responsible Ministers (and your Victorian State MPs.

Protesting on the 21st June

The Guardian reports that the government justifies these laws as “necessary for workers safety”. The Human Rights Law Centre and Environmental Justice Australia have asked for the legislation to be withdrawn.

In 2009, Nippon Paper Industries Co. Ltd acquired PaperlinX Ltd together with the Legislative Supply Agreement (LSA) which requires a fixed volume to be supplied to Nippon Paper

The Guardian reports that “Ellen Maybery, a senior lawyer with Environmental Justice Australia, said the proposed new criminal penalties were “harsh” and a “politically motivated crackdown on legitimate political expression” ahead of the November state election.

Tasmania is also trying to pass similar laws, after three previous attempts that either did not pass the Upper House, or were thrown out by the High Court as unconstitutional, for instance in the case involving Bob Brown.

An eye witness account from Extinction Rebellion Australia quotes Victorian Forest Alliance spokesperson Nic Fox: “Victorians have a long and proud history of peaceful protest. The freedom to protest sits at the heart of our democracy. In the context of a climate crisis, continued destruction of First Nations Country, and collapsing ecosystems, we need to protect this right more than ever. This Bill is not only unnecessary; it is undemocratic and undermines critical civil and political rights.”

The legislation is presented as a way of supporting forestry workers mental health, protecting them from devious, new or dangerous protest tactics, defining protest equipment such as pipes or climbing equipment as dangerous (even perhaps protest signs), and increasing penalties. Melbourne Activist Legal Support (MALS) commented that if the Bill was passed it would “provide ‘authorised officers’ with broad and dangerously intrusive stop and search powers. It will criminalise the possession of objects that have been used safely in nonviolent forest protests for over forty years.”

Miriam Robinson from Extinction Rebellion talked about the importance of forests. “We must protect our wildlife from habitat loss, climate change and direct injury during logging activities. There are alternatives for paper products, firewood and building materials. There is no alternative to our forests. Forests left undisturbed are far less prone to fire than logged forests.”

Dr Chris Taylor, ANU found that logging contributed to the severity of the Black Saturday bushfires.

The Climate Choir members are long term activists, and many have been part of the forest protection movement for decades

Miriam spoke of the important role forests play in drawing down carbon.”Tearing down our forests is the exact opposite of what we need in a climate emergency.” Environmental Justice Australia noted that the Bill “would not only affect those exercising a legitimate right to political expression through protest, but they would also affect people who enter active timber logging areas to survey wildlife. Citizen scientists, conservationists, wildlife and environment groups and members of the community who conduct wildlife surveys play a vital role in collating data for Victoria’s Biodiversity Atlas.”

Speakers from forest protection groups emphasised the peaceful nature of protestors, their bravery, and the necessity of saving our Mountain Ash forests

On Tuesday evening during the second reading of the Bill, Dr Tim Read, Member for Brunswick, stated (in Hansard, at 18.18) that the noted tactics – tree sits and chaining up to machinery – are time honoured, and well recognised, for instance at the Franklin, Kakadu and Jabiluka. “Should we have removed the protesters that blocked the uranium mine at Jabiluka? Well, no. What actually happened back then was that government leaders like Bob Hawke visited Bob Brown’s Franklin River protests. He listened to the protesters, he listened to the community and the Franklin River was saved. That is a political legacy.” Dr Read had a Departmental briefing regarding any evidence on OH&S impacts: “I thank the department for their bill briefing and their frank and fearless honesty in admitting that there are currently no data or documented evidence to indicate increased protest activity has led to adverse mental health or OH&S outcomes for forestry workers.”

Greens MPs supported the logging protest. Dr Read is on the left.

Dr Read suggested that the Bill will reduce oversight, increasing VicForests’ profitability, by reducing the costs from fighting court cases. “The government believes that by effectively shielding the public from seeing what is going on in our forests it will leave forestry oversight to a hopelessly weak and conflicted regulator, meaning VicForests can operate with less oversight and less compliance with environmental laws, which might finally mean it is able to make some decent money from logging.”

Hansard concludes with an adjournment, and the following sitting day (Wednesday 22nd) was taken up with Treaty business.

Can Victoria’s forests afford another eight years of logging?

In Victoria, Labor announced in 2019 that logging would cease in 2030, the year that the VicForests contract concludes. As the Guardian reported, VicForests was unprofitable “were it not for skyrocketing payments from the government not to log areas where the Leadbeater’s possum is found”, amounting to $11m according to the 2019 annual report. In 2021 the government offered $100m as a transition package, however VicForests has continued to be embroiled in “systematic illegal logging“.

VicForests has breached environmental conditions and has been taken to court.

In 2020 a Federal Court found that VicForests had logged in breach of State laws. The ABC ran repeated articles on VicForests breaching conditions, particularly in Melbourne’s drinking water catchment, where only two incidences were actually investigated by the Office of the Conservation Regulator (OCR). The ABC noted that the OCR “decided not to take regulatory action against the state government-owned logging company, VicForests.”

In 2021, “high-resolution spatial data and information obtained as part of an ABC investigation have sparked allegations that the timber corporation, VicForests, is putting this vital process” (water filtering in the Thomson catchment) “at risk through widespread and systemic illegal logging of the region’s steepest slopes.”

The ABC investigation continues, saying that the for-profit VicForests corporation “made a $4.7 million loss in the last financial year, even after receiving about $18 million in funding from the state government. Further documents obtained by the ABC suggest the regulator, whose job it is to monitor VicForests, was alerted to the breaches but failed to properly investigate.” 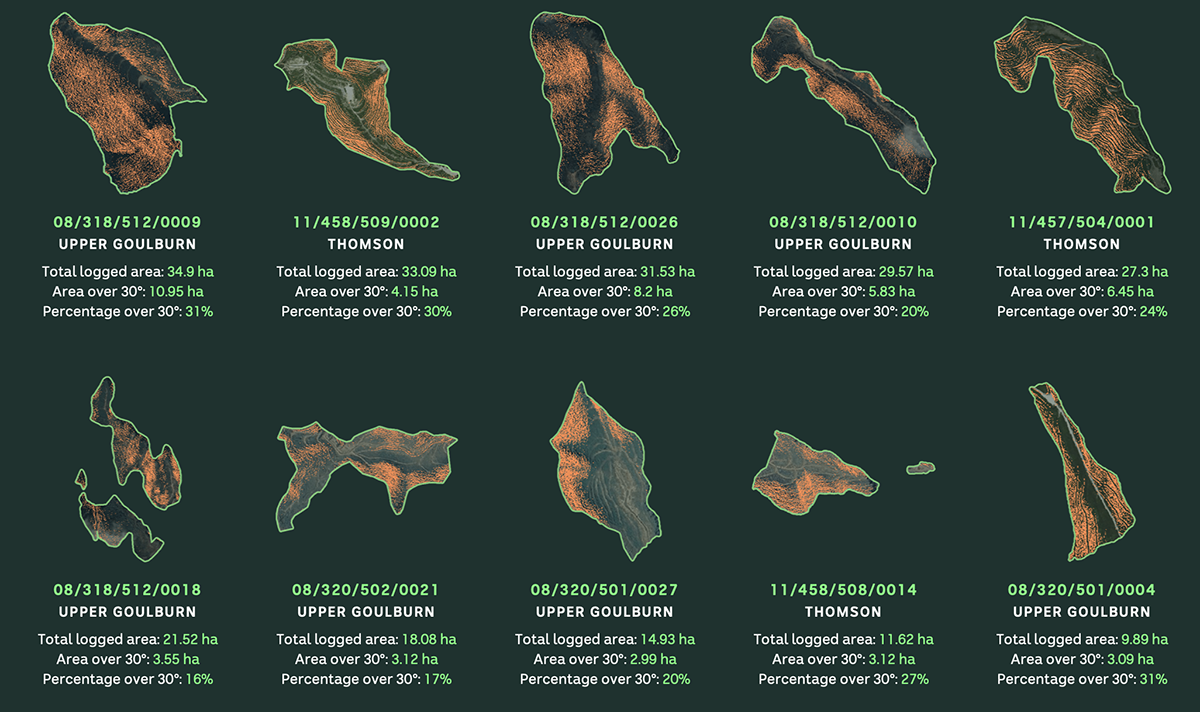 Last November, the ABC reported that the State government removed “a strict ban on logging on steep slopes in those areas — a law experts allege was repeatedly broken by VicForests.”  The removal creates a retrospective justification for VicForests’ repeated breaches of the 30 degrees slope rule, making it difficult for OCR to apply penalties. “Instead of abiding by the law, what they’ve done is simply change the laws to make what was a widespread, illegal logging approach legal,” said David Lindenmayer, a professor of forest ecology at the Australian National University. Professor Lindenmayer commented “It makes the Environment Minister look very weak. It makes the Premier look very weak. It’s the Victorian government kowtowing to the CFMEU and VicForests to cover up illegal behaviour.” The ABC report claimed that “Environment minister Lily D’Ambrosio declined an interview request. A spokeswoman for the Victorian government said the changes to the law were needed because of errors in its drafting.” 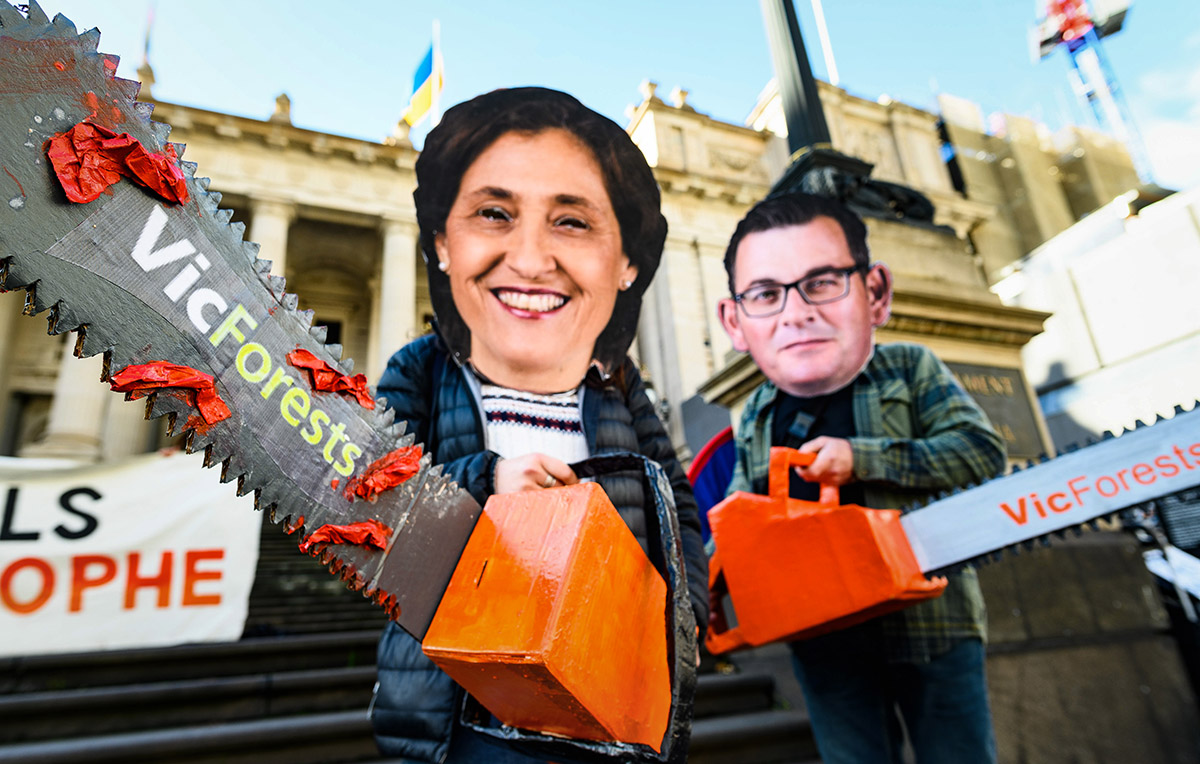 Our tall trees, and our faunal emblem, Leadbeater’s Possum, are at risk

Professor David Lindenmayer’s research confirms that Victorian Mountain Ash forests – our “tall trees” – are in serious decline, and need to be protected. In 2017, based on 30 years of research, he stated that the “Leadbeater’s Possum and other species will become extinct within about 30 years unless clear-fell logging stops in Victoria’s Mountain Ash forests”. The 2009 Black Saturday bushfires had wiped out 42% of habitat and reduced the population of the possum to 2000, down from 5000. The greater glider population is also vulnerable: “half of the greater glider population in Mountain Ash forests has also been lost in the past decade”.

Professor Lindenmayer said native animals in the Mountain Ash forest “require large old trees over 190 years for tree hollows, which they need to breed and survive.  He said only one per cent of Mountain Ash forest was old growth, compared to 60 per cent 150 years ago”. 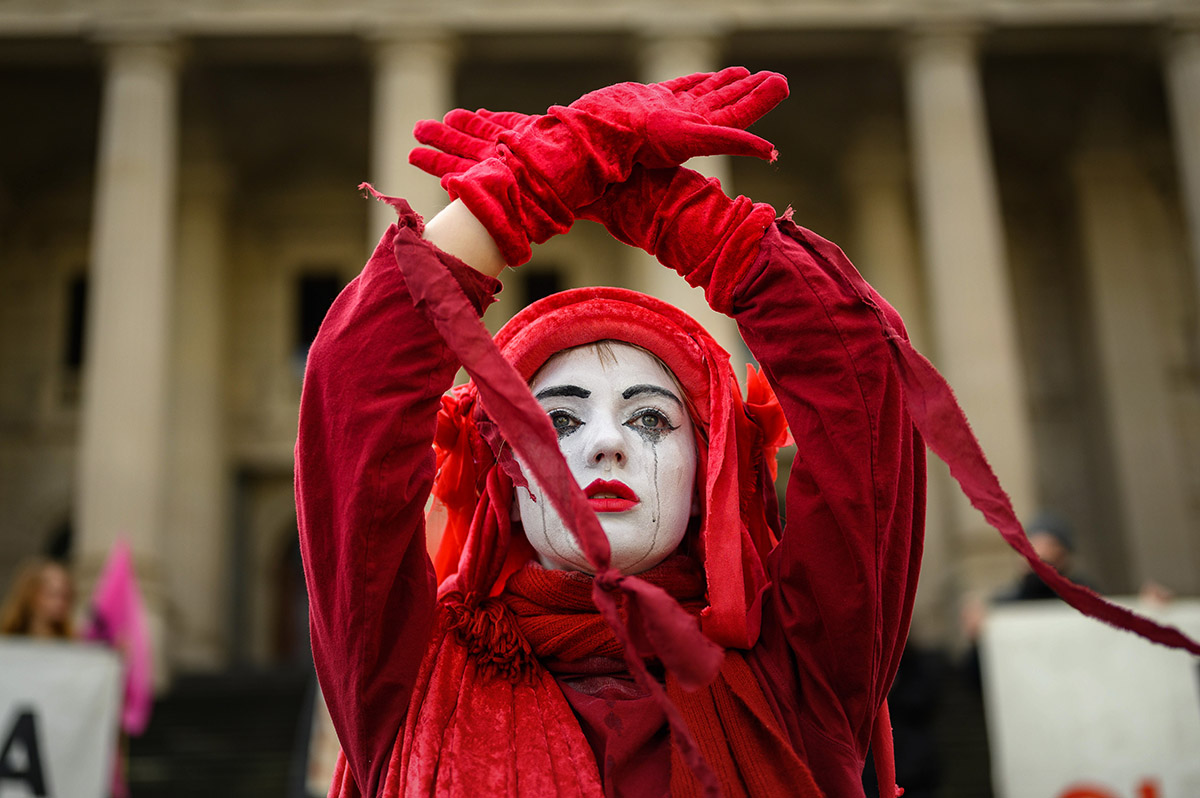 Tears from a Red Rebel about our dying ecosystems. Extinction is forever.

Our Victorian forests are the most carbon dense in the world, at 1900 tons of carbon per hectare says Professor Brendan Mackey, ANU: “Similar but lower carbon densities were found for other temperate moist forests in New Zealand, Chile and the Pacific coast of North America. By comparison, the average tropical forest had somewhere between 200 and 500 tonnes of carbon per hectare, says Mackey. “The common understanding is that tropical forests store the most carbon because they’re the most biologically productive and have the most plant growth,” says Mackey. But, he says, researchers have missed the fact that nearly half of the carbon locked up in temperate forests like the mountain ash, is in fallen trees and other dead plant material.”

Carbon emissions are spinning out of control. It’s madness to log the densest carbon stores on the planet

What can we do to help? 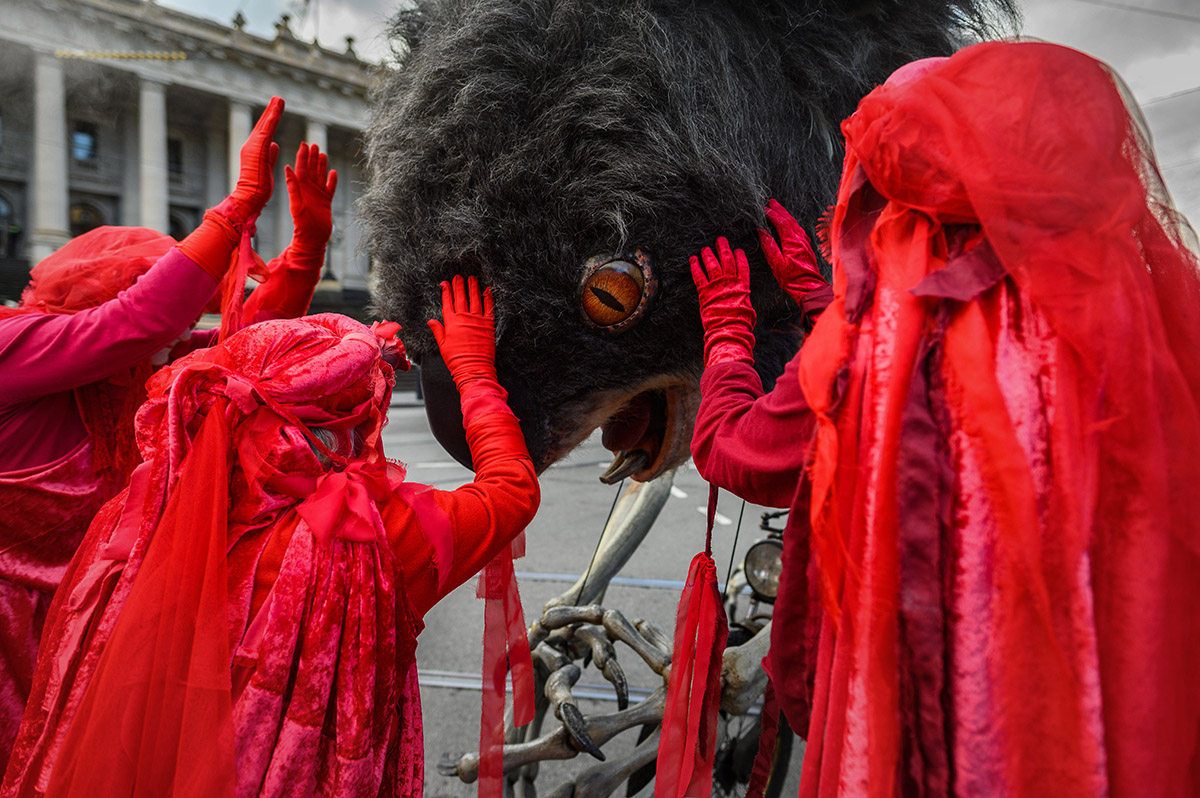 For critical background, we invite you to read Dr Chris Taylor’s report on how, despite massive losses, Victoria is bound by an agreement with Japanese company Nippon to supply a fixed volume until 2030.