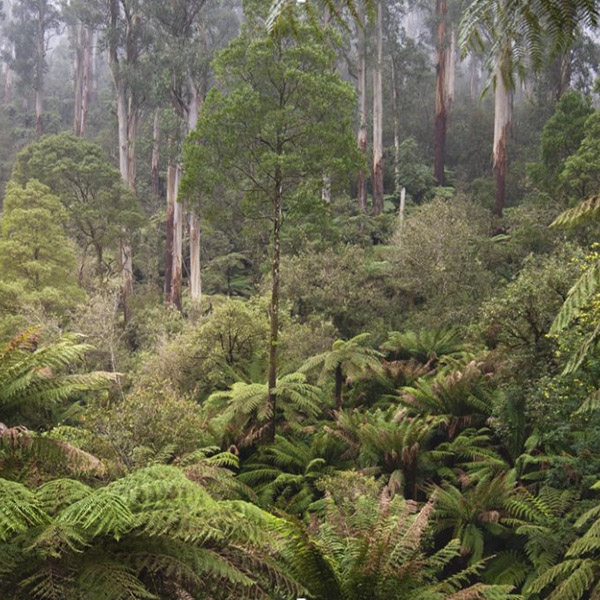 The Great Forest National Park, worth fighting for with Dr Chris Taylor and Sarah Rees

We acknowledge this land belongs to the sovereign people of the First Nations. This 10-minute video celebrates the cultural value of the forest.

Victoria is home to the tallest flowering tree in the world, Eucalyptus regnans or Mountain Ash. A study carried out by environmental scientist Professor Brendan Mackey of the Australian National University in 2009 identified that mountain ash forests in Victoria’s Central Highlands are the best in the world at locking up carbon.

Stands of tall trees are found in the Otway ranges (south-west), Dandenong and Yarra ranges (Central highlands) and Strzelecki ranges (east) as well as Mount Disappointment and East Gippsland. East Gippsland is home to mainland Australia’s last unbroken tract of vegetation from snow to shore.

Most of Victoria’s remaining forest is subject to logging. Sadly, most native trees cut down in Victoria become woodchips, pulp and pallets, which have short lifespans before going to landfill. In landfill, the wood breaks down and releases carbon back into the atmosphere. 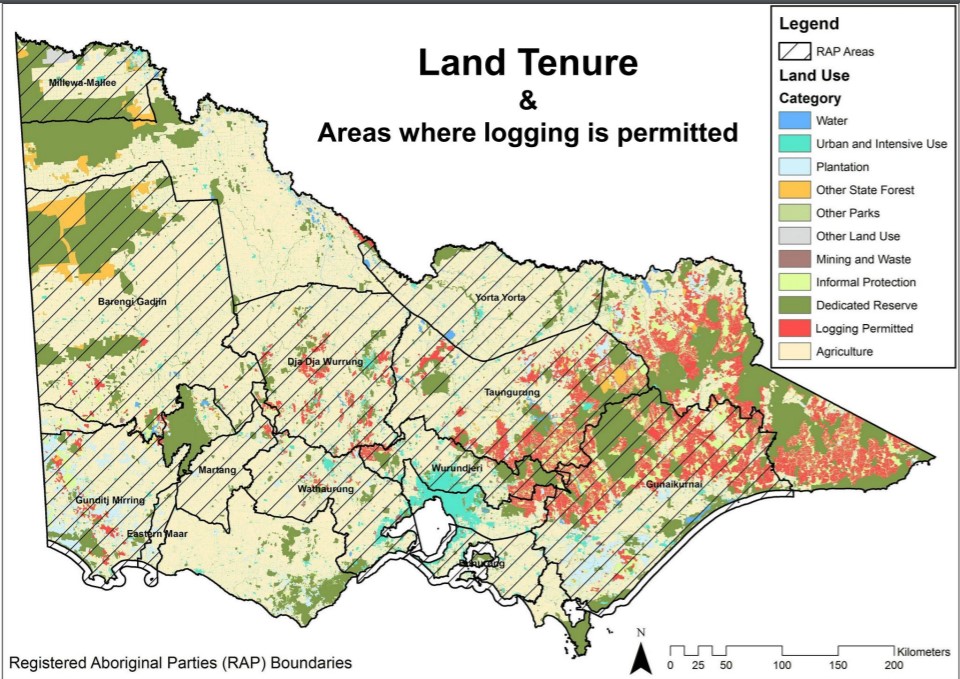 Most biomass is burnt

After forest coupes are clear-felled, only about 40 per cent is taken for production. Of this, over half is pulped and made into paper and cardboard. Less than 10 per cent is B-grade sawlog for converting into flooring and furniture. The remaining 60% is classified as debris, which is either burned off or decomposes – becoming a major source of greenhouse gas emissions. 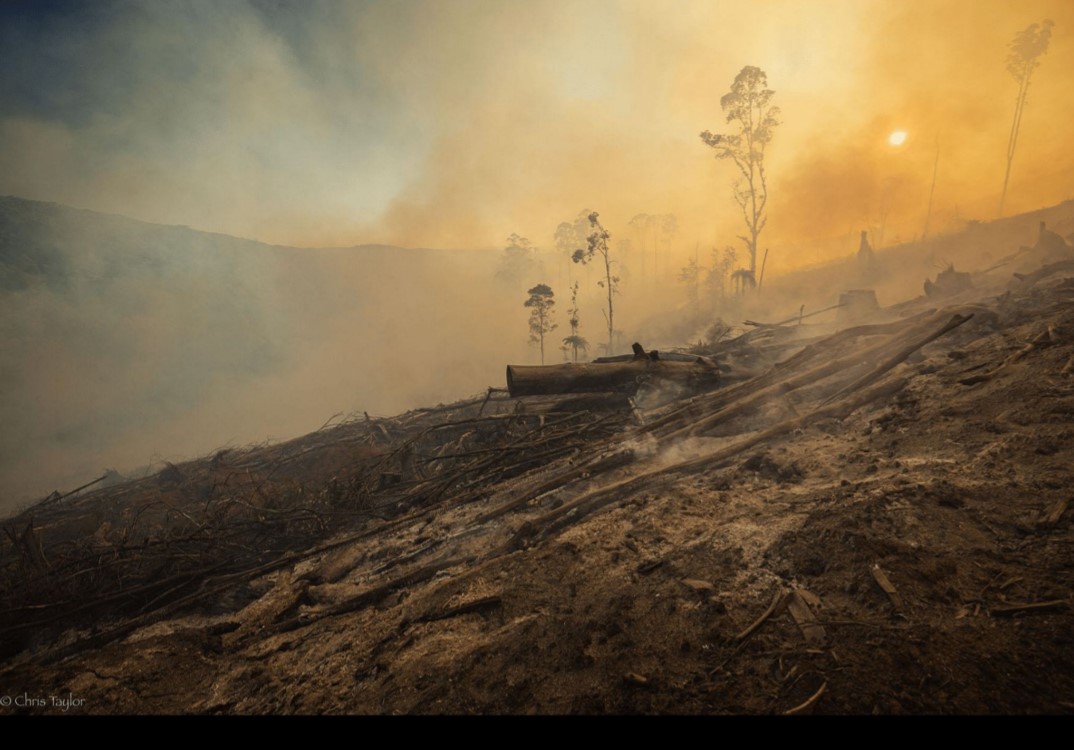 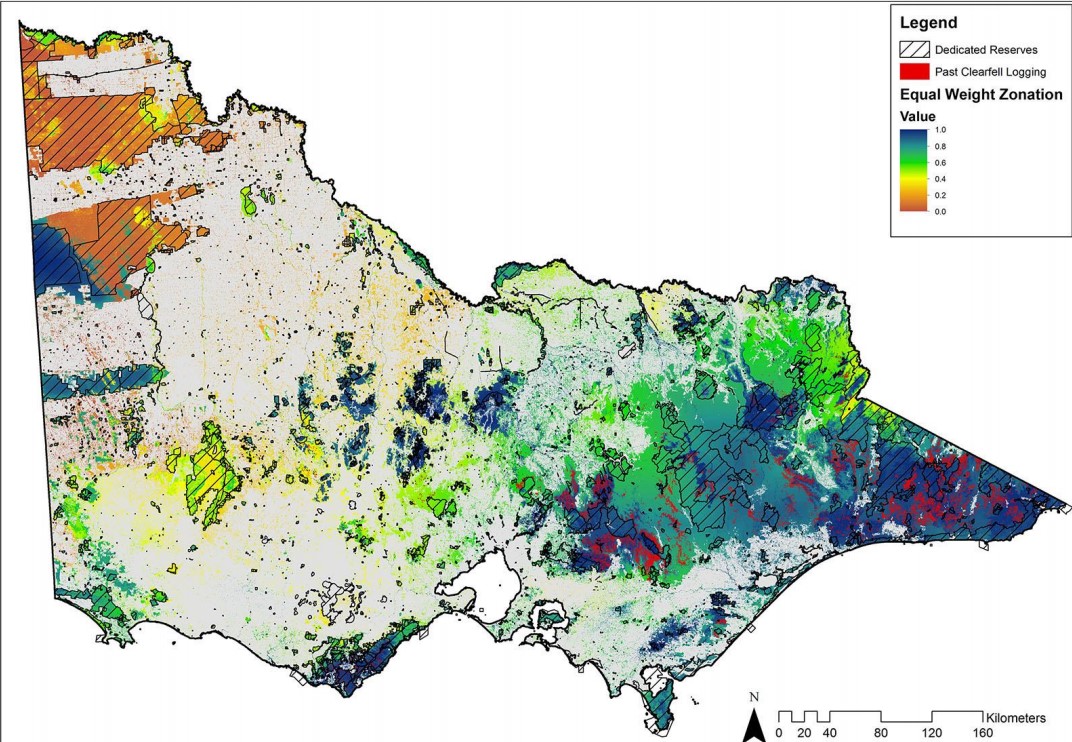 The frequency of forest fires in Victoria is increasing

In addition to disturbance from logging, warming and drying resulting from climate change are leading to more frequent and intense fires. Regrowth after logging means younger trees permitting fewer hollows for wildlife and causing more frequent crown fires. This map shows that some parts of Victoria’s forests have been burnt several times since 1995. 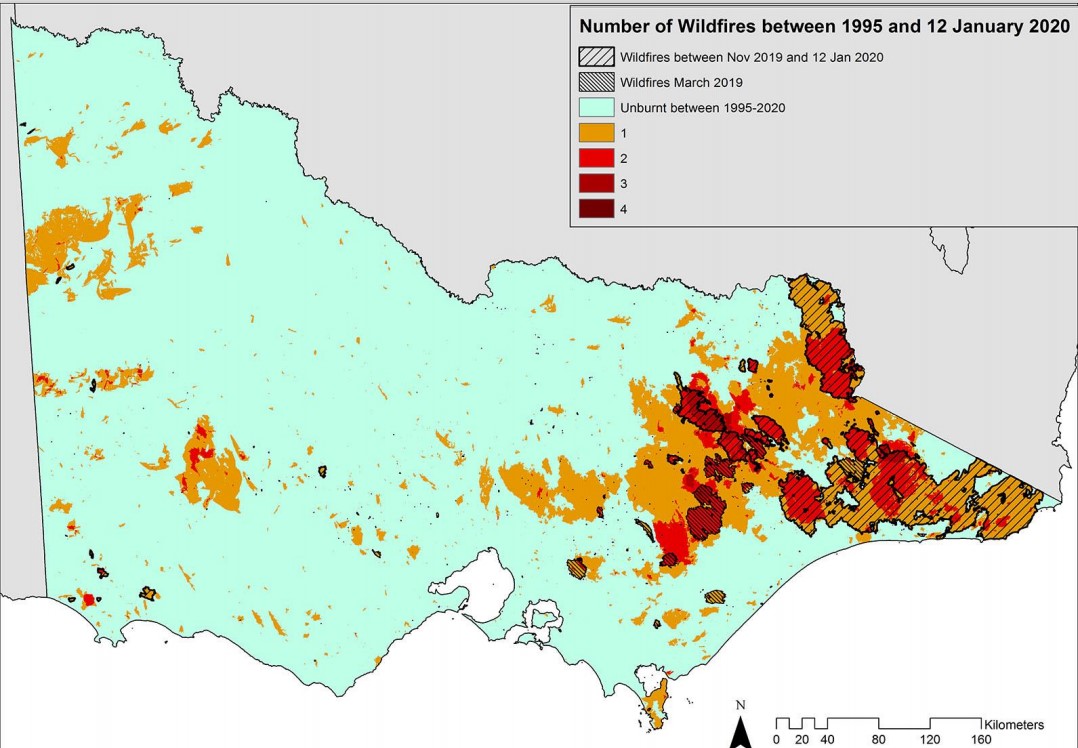 Forests of the Central Highlands

The forests of the Central Highlands are located 60-120km east of Melbourne’s CBD. The land is managed by DELWP, Parks Victoria and Melbourne Water including State Forest, National Park, reference areas, and water catchments, from Toolangi in the west, Rubicon in the North, Powelltown in the south and Thompson Dam in the east. It is a tall forest ecosystem of Mountain Ash (Eucalyptus regnans) and Alpine Ash (E. delegatensis). It is estimated that only 1.5-3% of the old-growth forest remains and this is under threat from major fires and clear-fell logging.

Victoria’s forests are home to hundreds of rare and threatened species, but they also support humans. These forests clean our air. They work as giant air conditioners for our cities. They provide Melbourne with safe, clean drinking water, contributing over $300 million a year to GDP. As tourist destinations, they add $260 million a year to GDP. These forests provide habitat for many unique species, several endangered or critically endangered.

The poor practice of VicForests and weak protection 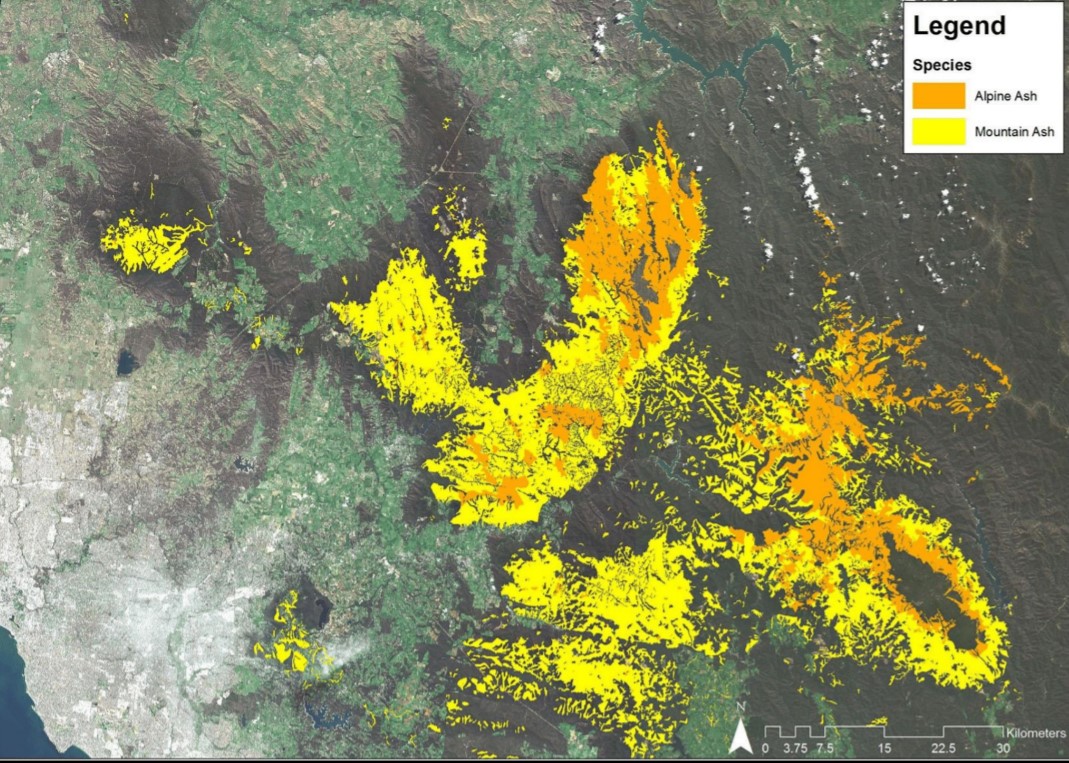 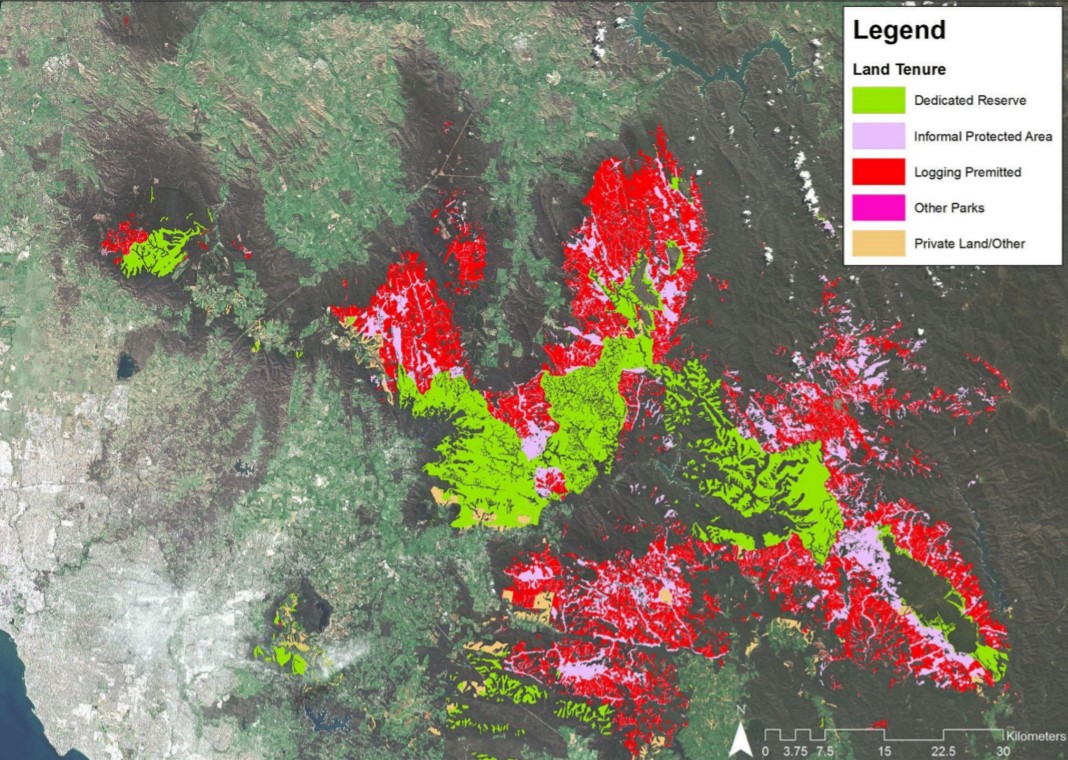 The unstainable practices of VicForests have prevented it from securing Forest Stewardship Certification (FSC) for its products leading to bans by Officeworks and Bunnings. VicForests is currently defending three court cases against Wildlife of the Central Highlands, Friends of Leadbeater’s Possum and Fauna and Flora Research Collective. All three organisations are represented by Environmental Justice Australia. In 2018, the Office of Conservation Regulation was established to oversee logging. Despite poor practice, no penalty has ever been awarded to Vicforests. The sad exemption of Regional Forest Agreements from national environmental law (EPBC Act) has been continued. You can support the work of EJA with a donation here.

Increasingly, the world is realising the importance of preserving and restoring its natural resources. Rainforests, forests, wetlands and mangroves are powerful natural allies in the climate fight because they absorb carbon from the atmosphere and lock it up in healthy soils. The world’s forests absorb nearly a third of all greenhouse gas emissions each year and lock away nearly twice as much carbon as is in all global coal, oil and gas reserves.

The Global Deal for Nature is a plan to safeguard the Earth, protecting at least 50% of our lands and oceans. Scientists say this bold target is needed to prevent the extinction crisis, halt runaway climate change, feed the world, and ensure a healthy planet for future generations. The agreement must ensure our living planet is sustainably managed; must have the active support of indigenous peoples; and must address the needs of human development. 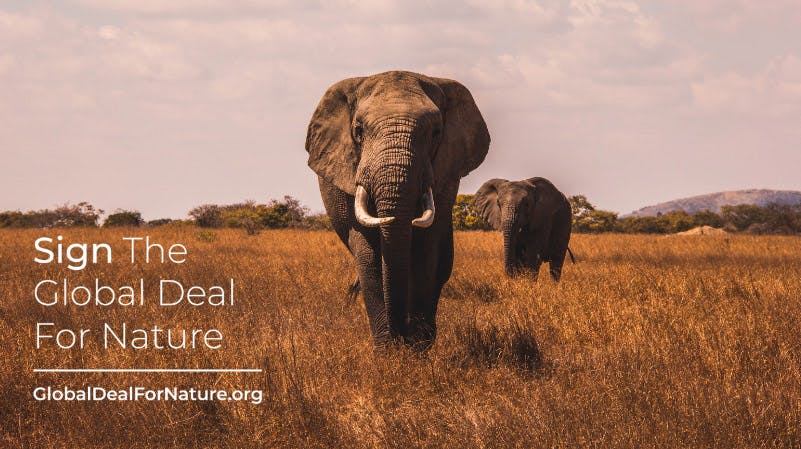 US President Biden has committed to “protecting biodiversity, slowing extinction rates and helping leverage natural climate solutions by conserving 30 per cent of America’s lands and waters by 2030.” Victoria could aim to do the same. Why not write to Victoria’s Environment Minister to suggest the idea. 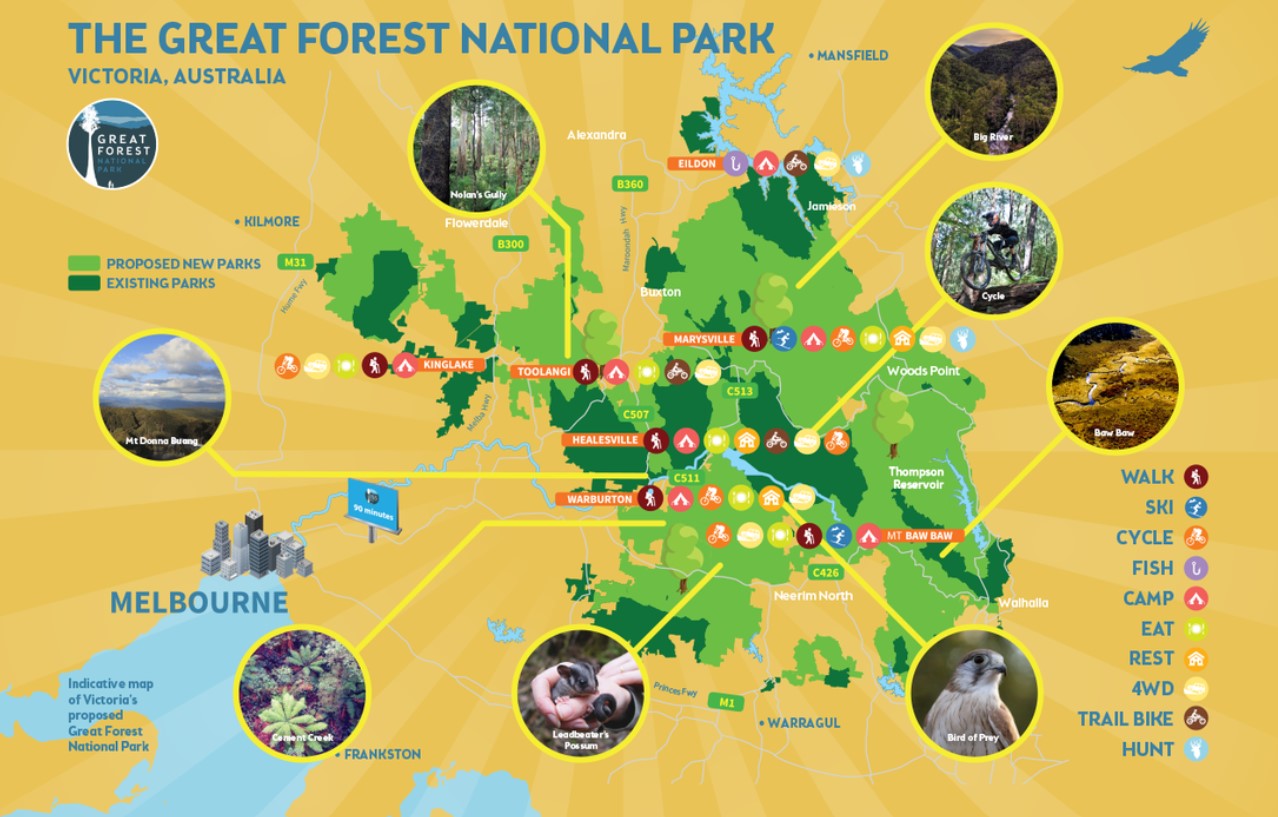 The cinematic release of a powerful new short film ‘Make It Happen’ celebrates the value of Great Forest National Park to Victoria.

Come on Victoria, let’s make it happen. Write to your MP and Victoria’s Environment Minister and send a message of support.

The Great Forest: The Rare Beauty of the Victorian Central Highlands 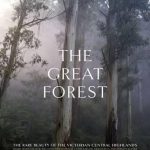 By David Lindenmayer, Chris Taylor, Sarah Rees, Steve Kuiter
“The Great Forest is a tribute to extraordinary landscapes now under severe threat from logging and wildfires, such as the catastrophic fire that struck on Black Saturday in 2009. It uncovers the intricate webs of life that make Mountain Ash forests so much more than their towering trees. It explores the unique forests that have sustained the Gunaikurnai, Taungurung and Wurundjeri peoples for tens of thousands of years, and that provide a home for creatures found almost nowhere else. The exquisite photographs reveal the Central Highlands of Victoria to be one of Australia’s largely undiscovered natural treasures.”

LIMITED OFFER: We are doing a bulk order of the Great Forest book, reduced from $49.99 to $32.50 for LF. Some of us are ordering an extra copy to give to a Vic Gov MP to show them what they are logging.  To order, please email Ray Peck raypeck13@gmail.com with the number of copies you want and (if any) the names of three politicians you want to deliver a book to. Ray will reserve your first choice if it is not already taken. If someone got in first, your second choice will be reserved etc. Ray will then place a bulk order with the publisher who will send you an invoice to pay.
When you receive your books you can deliver to the Parliamentarian you reserved with a personal note. Feel free to order as many books as you like and reserve any number of politicians. Please don’t forget to include your name, phone number and address!”

Thanks, recording and slides

Thanks to Dr Chris Taylor and Sarah Rees for their invaluable presentations. Watch our recording on Facebook Live or on Youtube. Our Twitter string with links to Chris’ and Sarah’s slides is here. 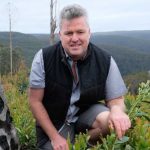 Dr Chris Taylor is a Research Fellow at the Fenner School of Environment and Society, Australian National University.
Chris specialises in spatial analysis of forest ecosystems and disturbance regimes, remote sensing, environmental modelling, land use and Forest certification. He has been involved with a number of research projects, ranging from the analysis of fire severity patterns across Australian forests through to climate change adaptation in Australian agriculture. Chris is also a passionate landscape photographer and has held a number of exhibitions of his photography. 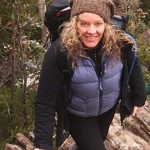 Sarah Rees is a long term conservationist for the forests and wildlife of Australia with most of her work focused in the Ash forests of Victoria’s Central Highlands. With conservation successes for species such as the Baw Baw Frog and Leadbeater’s Possum attributable to her work, Sarah participates in policy development with community, government and business. Sarah is a Board Director of the Forest Stewardship Council, science facilitator with several large universities, Committee member for the Office of Conservation Regulator and a founder of the Great Forest National Park initiative.