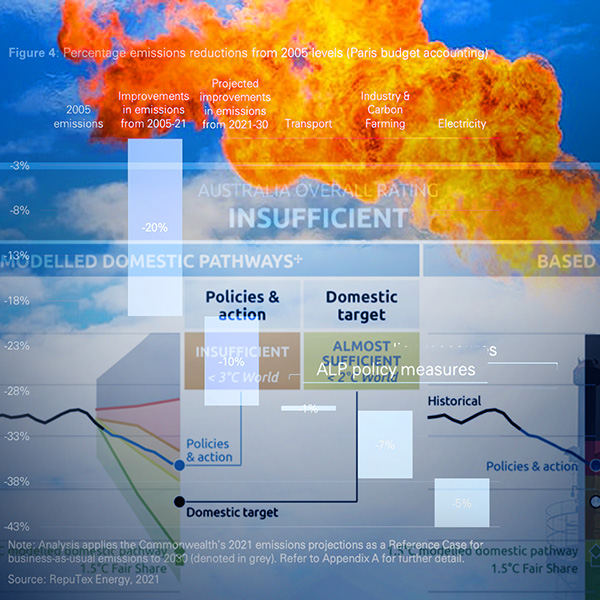 Amended by Greens and independents to make 43% by 2030 a floor, not a ceiling, Labor’s climate bill passes the lower house, and heads to a Senate inquiry which is due to report by the end of August.

The Liberals refused to negotiate, and voted against the new legislation, and are weighing up a policy to “back nuclear power“.

The legislation is likely to pass the Senate. 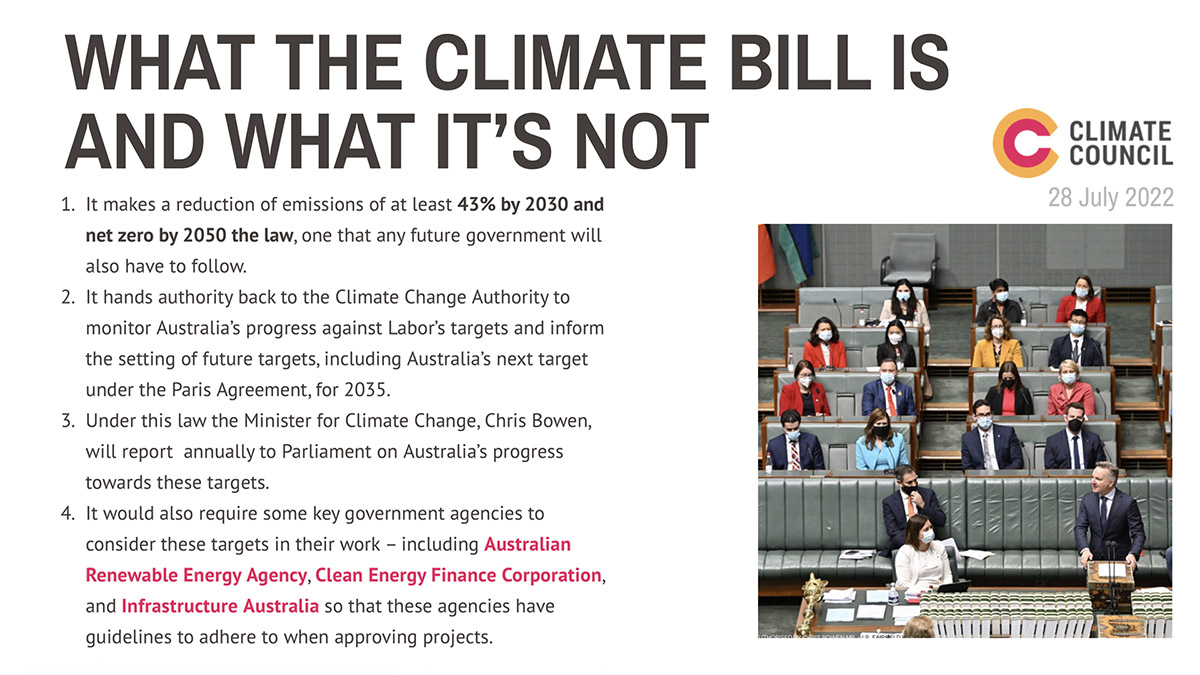 Labor’s climate bill is not a detailed plan, but will be used to guide current and future governments in Australia’s decarbonisation journey

Powering Australia Plan -43% by 2030, and no moratorium on new coal and gas

In the absence of an effective price on carbon, Australia is stuck with making the best of other approaches.

Labor went to the election with a 43% by 2030 climate target, supported by modest climate proposals. These included

As Adam Morton writes, the policy has few actual mechanisms to reduce emissions, it is more flagging a direction to support business confidence. 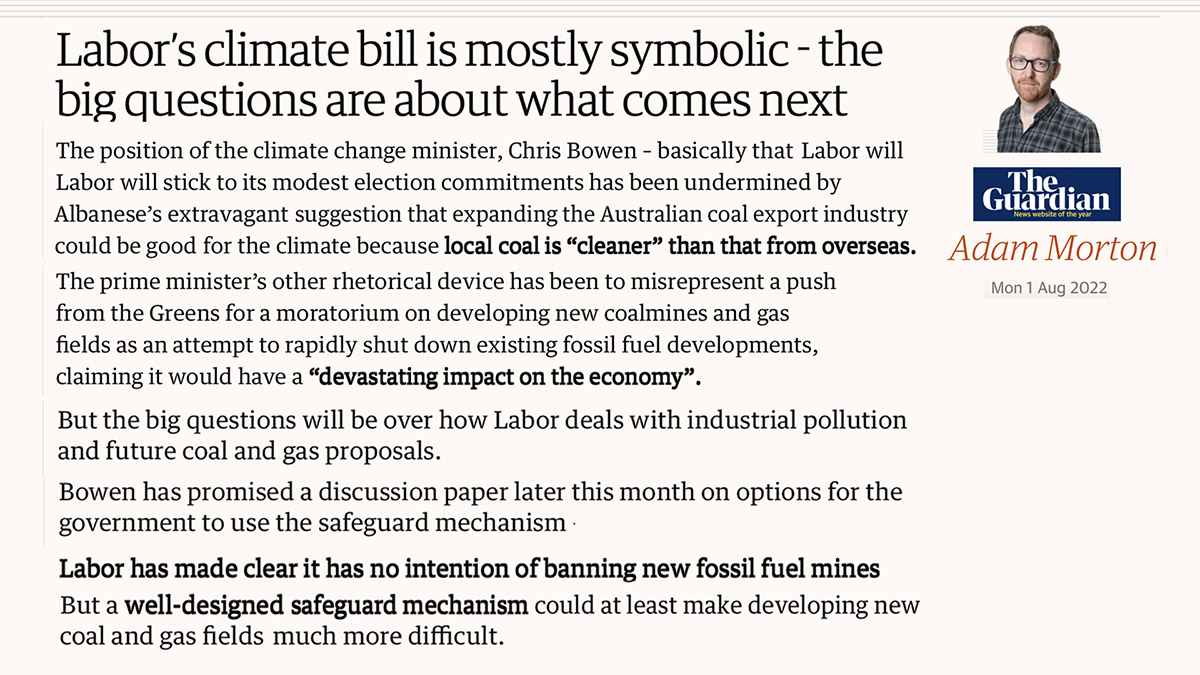 Labor’s climate legislation is basically symbolic, there is barely anything in it to reduce emissions. What matters is the integrity of carbon credits and introducing a trigger mechanism

Climate credits and climate trigger
Morton is concerned about Prime Minister Albanese’s talking points referencing the notion that if we don’t supply coal, someone else will – uncomfortably familiar arguments. Morton also notes the reliance of the policy on a legislative tool that has fallen into abeyance, the Safeguard Mechanism, which would increase pressure on the biggest corporate polluters. As well as reducing their own emissions they will have full access to Australia’s carbon credits, which “is under a cloud having been described as a fraud and “largely a sham” by one of its architects.”

As Morton says a more straightforward approach (than stricter emissions regulations on fossil projects) “might be to just introduce a climate test – often called a climate trigger – in national environment laws so that new major developments could be blocked or curtailed if they were to cause substantial emissions.”

Michael Mazengarb notes that the Labor party room chose “from a range of potential targets that included options as low as a 35 per cent cut. The plan assumes major milestones, including an 82 per cent share of renewables in Australia’s main grid by 2030, supported by its previously announcing $20 billion grid support plan.”

Mazengarb notes the target is little better than that produced by State policy alone, matching “an estimate produced by ClimateWorks that suggested State and Territory targets could deliver national greenhouse gas emissions reductions of 42 per cent by 2030 on their existing targets.”

If the ALP had chosen a small target approach, perhaps it was because they were wary of another “barrage of negative stories” from Murdoch’s “blowtorch”, given Labor’s climate policy was seen as a significant contributor to the 2019 defeat.

Labor’s election review noted “anti-coal rhetoric” and states that Labor’s extensive policy agenda “exposed Labor to a Coalition attack that fuelled anxieties among insecure, low-income couples in outer-urban and regional Australia that Labor would crash the economy and risk their jobs”. The review recommended that its policies “be limited in number and be easily explainable, making them less capable of misrepresentation”, and also found that

“The Labor Party cannot neglect human-induced climate change. To do so would be environmentally irresponsible and a clear electoral liability. Labor needs to increase public awareness of the costs of inaction on climate change, respect the role of workers in fossil-fuel industries and support job opportunities in emissions-reducing industries while taking the pressure off electricity prices.” 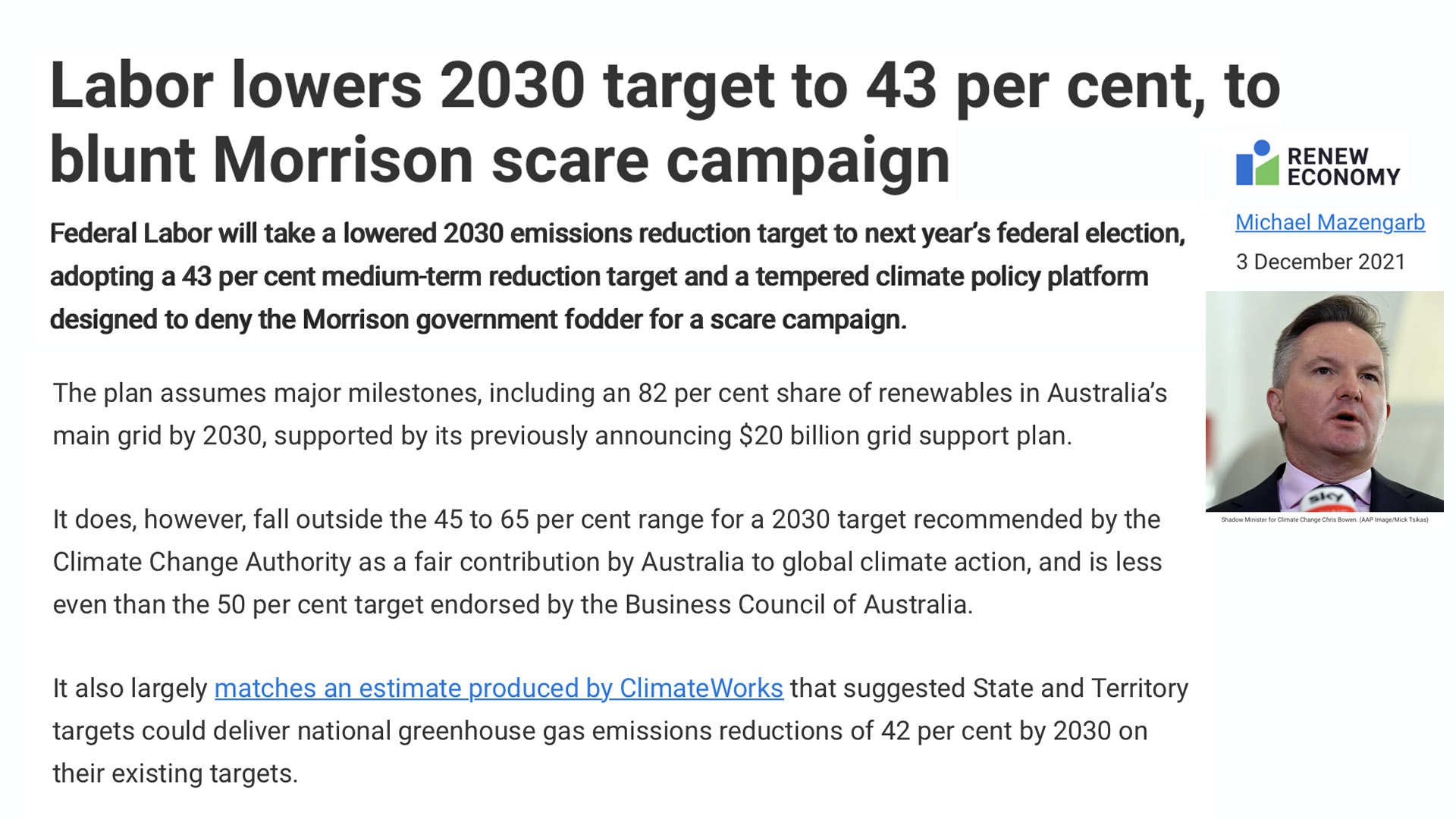 The electorate continues to turn away from the major parties, and climate change was the top voting issue in many electorates.

For the ALP to hide behind its “mandate” for 43% avoids looking at scientific recommendations, Australia’s geopolitical situation, and the wishes of a huge majority of the electorate who want stronger climate action.

Labor released its Federal climate target late last year – net zero by 2050, and a medium-term target of 43% emissions reduction by 2030, ALP’s Powering Australia Plan. The ALP contrasts this policy with the Morrison’s government’s widely derided 26-28% 2030 target, which they had said would reach 35% with existing policies.

ALP’s 43% by 2030 is very much lower than a science-based target of 75%, and Labor refuses to block new coal and gas projects.

Powering Australia rests on grid investment, support for electrifying transport, and an industry plan which leans heavily on carbon credits through using the Safeguard Mechanism

Ketan Joshi, writing for Renew Economy praises the investment in electricity sector interventions, which would see renewables penetration rise to above 80% by 2030 resulting in 37Mt/pa by 2030 savings. However support for electrifying transport yields only 4Mt/a, due to dropping a fuel emissions standard and avoiding combustion engine phaseouts. Joshi pans the industry policy with a heavy reliance on the “loophole-ridden” Safeguard Mechanism, where 40Mt/pa would come “purely from offsets.” 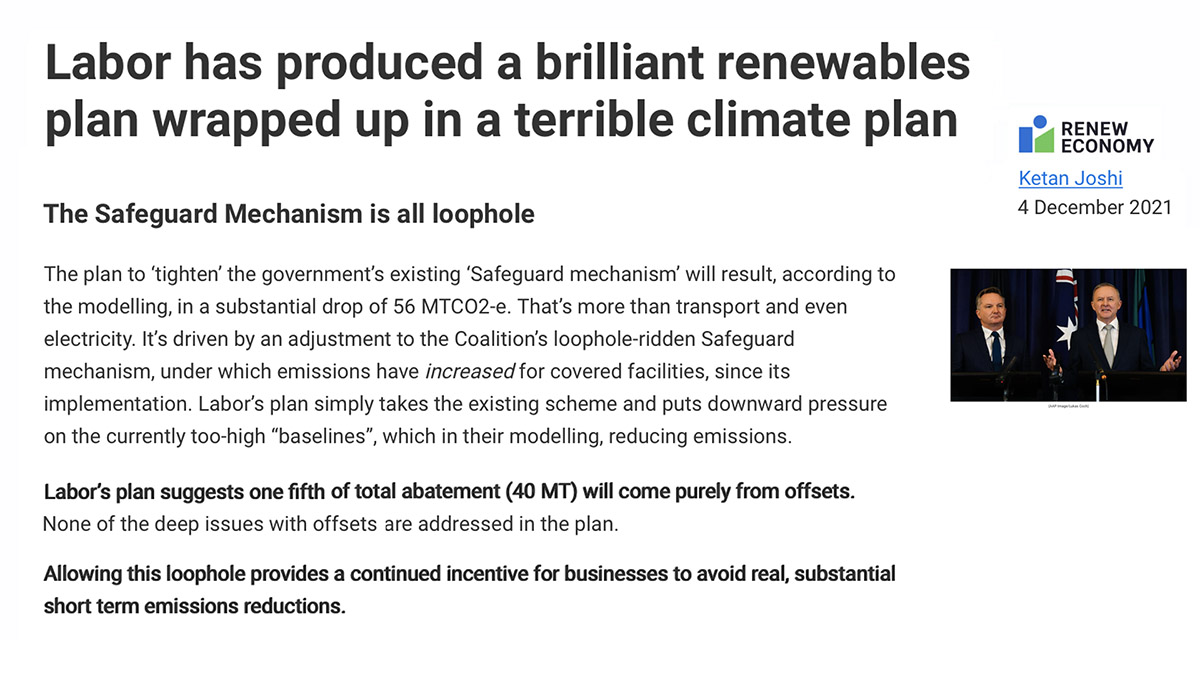 In summary, the Powering Australia Plan would “spur $76 billion of investment” and create 604,000 jobs, mostly regional, supported by grid investment, investment in green metals, support for EV transition and a moderate investment in solar banks and community batteries, according to the ALP.

Reputex carried out modelling and summarises the policy as follows: 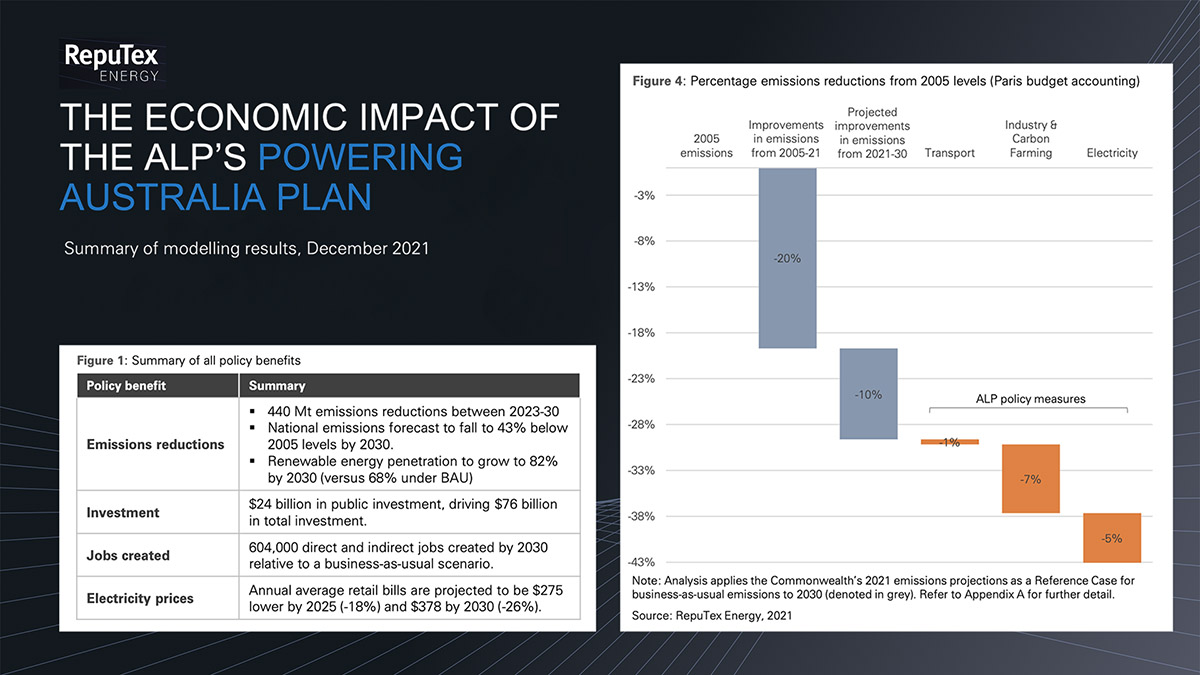 The carbon legislation is expected to deliver an extra 13% on top of the 30% that the government has said is already happening – in other words an extra 89Mt/year. 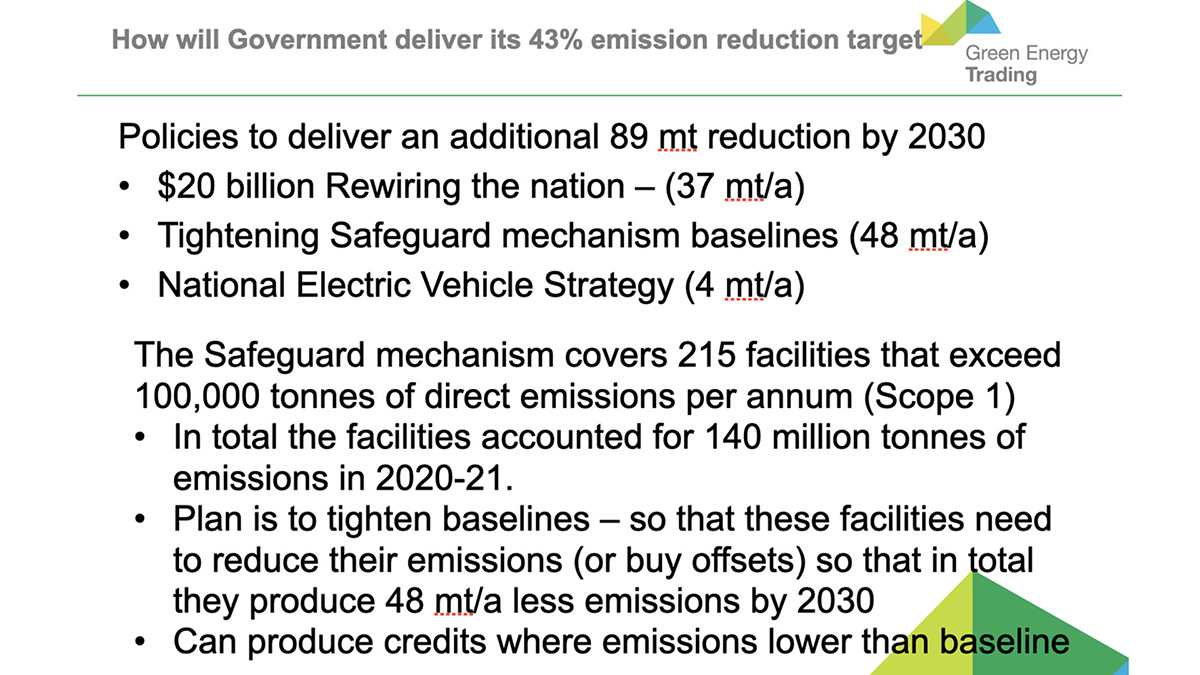 Labor’s carbon legislation is aimed to deliver an extra 13% emissions reduction by 2030, where probably 40, or up to 48Mt/year will come from the Safeguard Mechanism as carbon credits

As Ric Brazzale, Group Chairman on Green Energy Trading explained at our recent webinar on Carbon Credits, 48Mt/year will come from tightening the Safeguard Mechanism – where our biggest polluters will either reduce their own emissions or most likely buy carbon credits.

This is where the integrity of our failing carbon credits scheme must be improved – Minister Chris Bowen has promised a “sweeping review”, led by former Chief Scientist, Professor Ian Chubb. The four-person academic panel has called to be able to consider the agencies that run the scheme as well as the scheme itself.  You can check out Ric Brazzale’s explanation about the Safeguard Mechanism at this chapter point on our YouTube video, or check through this concise but thorough summary on our wrap-up blog here.

Will the legislation achieve significant reductions?

Australia’s environment is not in a good way, as evidenced by the “grim findings” of the long overdue State of the Environment Report. While noting the speed Australia’s new government took in instituting the new 43% target Climate Action Tracker has changed Australia’s rating to “Insufficient” from “Highly Insufficient”.

“While the new NDC target is a positive step, Australia will need to adopt more ambitious climate policies and take further action to reach 1.5°C Paris Agreement compatibility. The new government has an opportunity to increase its climate action in the crucial period to 2030. To achieve this the Albanese Government needs to abandon its support for new fossil fuel projects, which will drive emissions up, not down.” – Climate Action Tracker

The legislation has been “packaged with the capacity for the Climate Change Authority (CCA) to advise Labor on targets”, writes Ketan Joshi, who notes that “the government retains final say on the targets…leaving Labor the option of simply deciding to ignore the goals of the Paris Climate Agreement”. The legislation is characterised as “the safest, cheapest trajectory to near zero emissions”, and accompanying references to the climate wars are just “talking points” to “shift blame for the party’s failures onto their critics. It’s callous and cynical, and deeply disappointing.”

Why is no new coal or gas so important?

Australia wrested a significant concession in the way it accounts for its greenhouse gas emissions, with a land clearing loophole used only by three countries. Using this approach and taking a baseline year of 2005 when land clearing peaked, Australia is able to state that it has reduced its emissions by around 20% in 15 years, whereas an apples to apples comparison would show our emissions have risen 7% (The Australia Institute, 2021, p 9). If you include Scope 3 downstream emissions from our exports then the picture looks much worse – around 3.5-5% of global emissions, depending on how you count it – for instance emissions from our coal exports alone are nearly twice our total domestic emissions.

The Australian Institute calculated that the very large pipeline of coal and gas projects slated for completion would have emissions equivalent to “200 power stations”. With this kind of coal and gas expansion, Australia could be on track to originate a truly appalling 13% of global emissions by 2030. 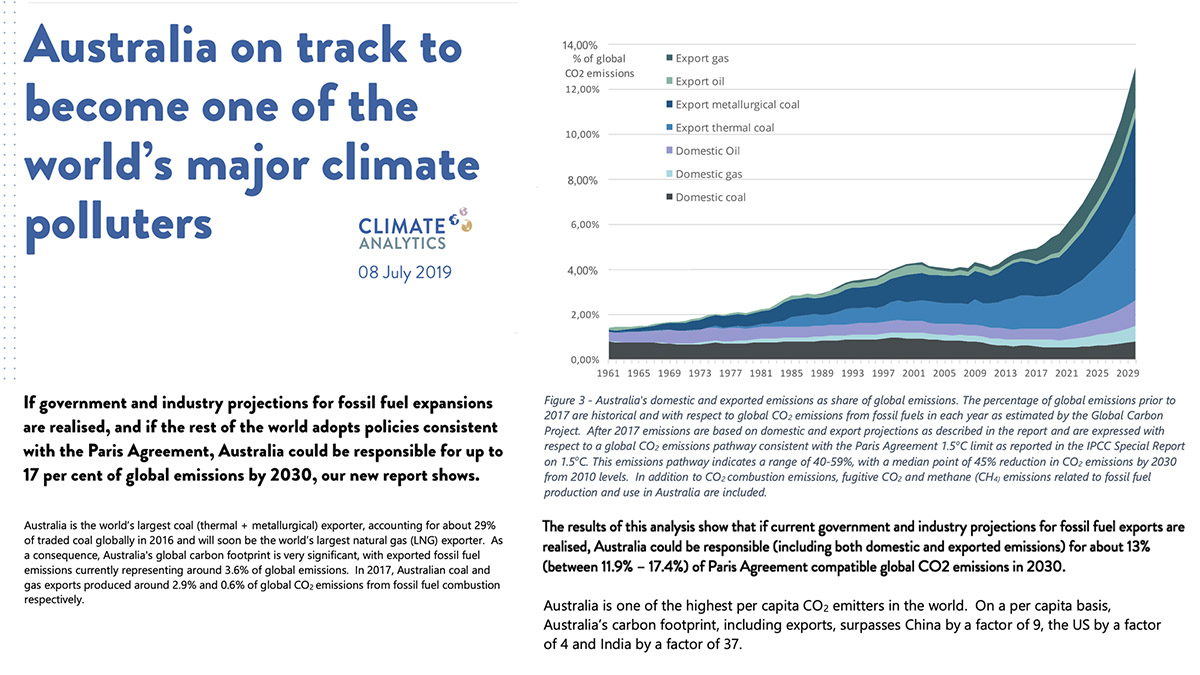 As other nations decarbonise, and if Australia continues to expand its coal and gas extraction and exports, our share of global emissions including downstream emissions will rise well above 5% to 13%, or even 17%, by 2030

Ketan Joshi, writing for Renew Economy analyses ALP’s climate policy, and says that planned new coal and gas projects would grossly overshadow the planned emissions reductions: “the Labor party’s current position is about 3% ‘putting the fire out’ and 97% ‘pouring petrol on it’. No – really. I just put the numbers into a spreadsheet, and I think this is roughly correct.” Joshi is working from The Australia Institute’s report on the emissions impact of planned and approved coal and gas expansion, “Undermining Climate Action, The Australian Way.” 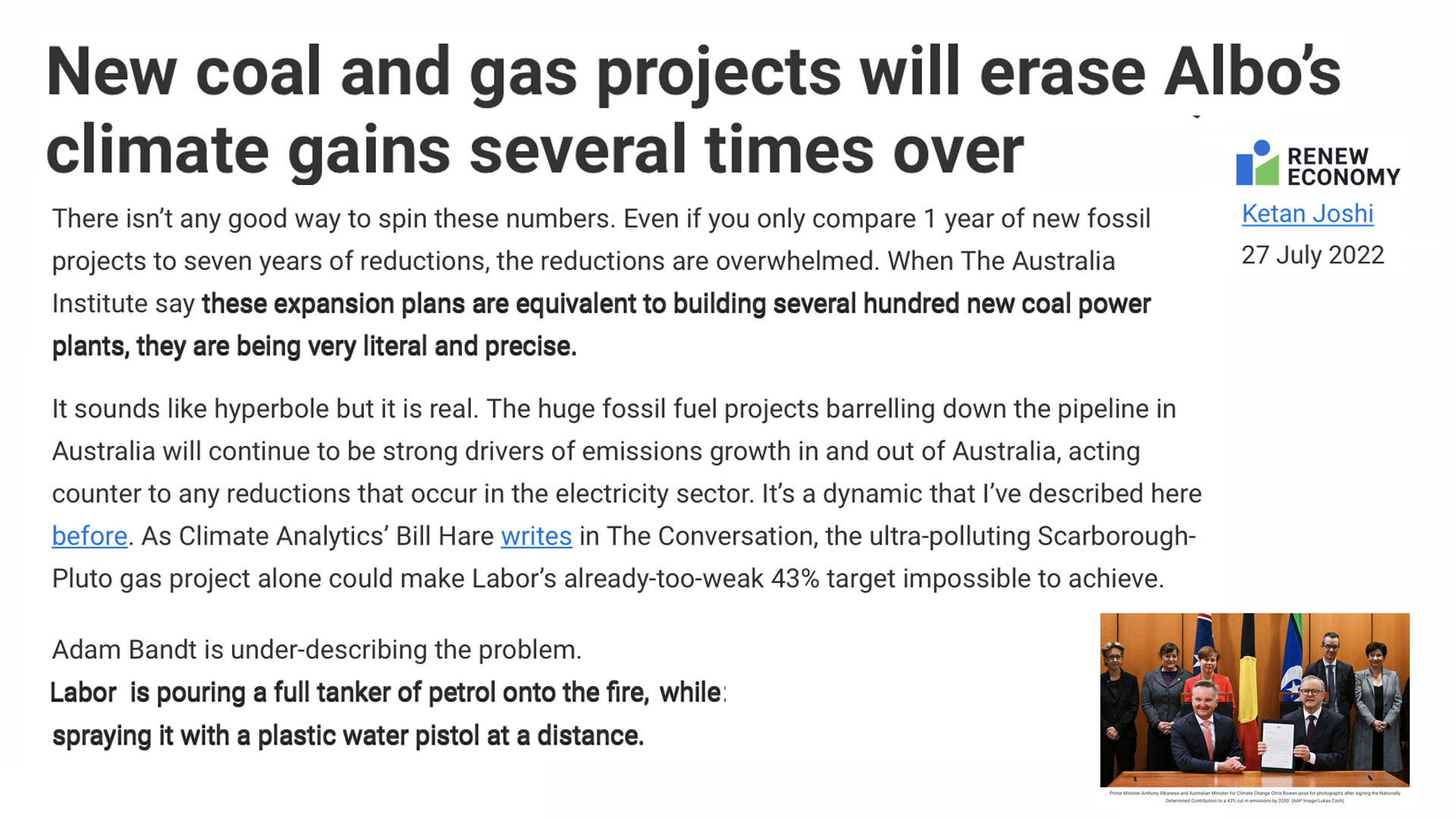 Ketan Joshi calculates that emissions from planned coal and gas projects will well and truly wipe out any planned emissions reductions.

Will our biggest polluters act to reduce their emissions? Joshi notes that “Reputex’s modelling explicitly says these companies ought to have free reign to use offsets instead of actually reducing emissions, which means we can safely disregard the effect of Labor’s policies on the coal and gas mining industries in this calculation.” 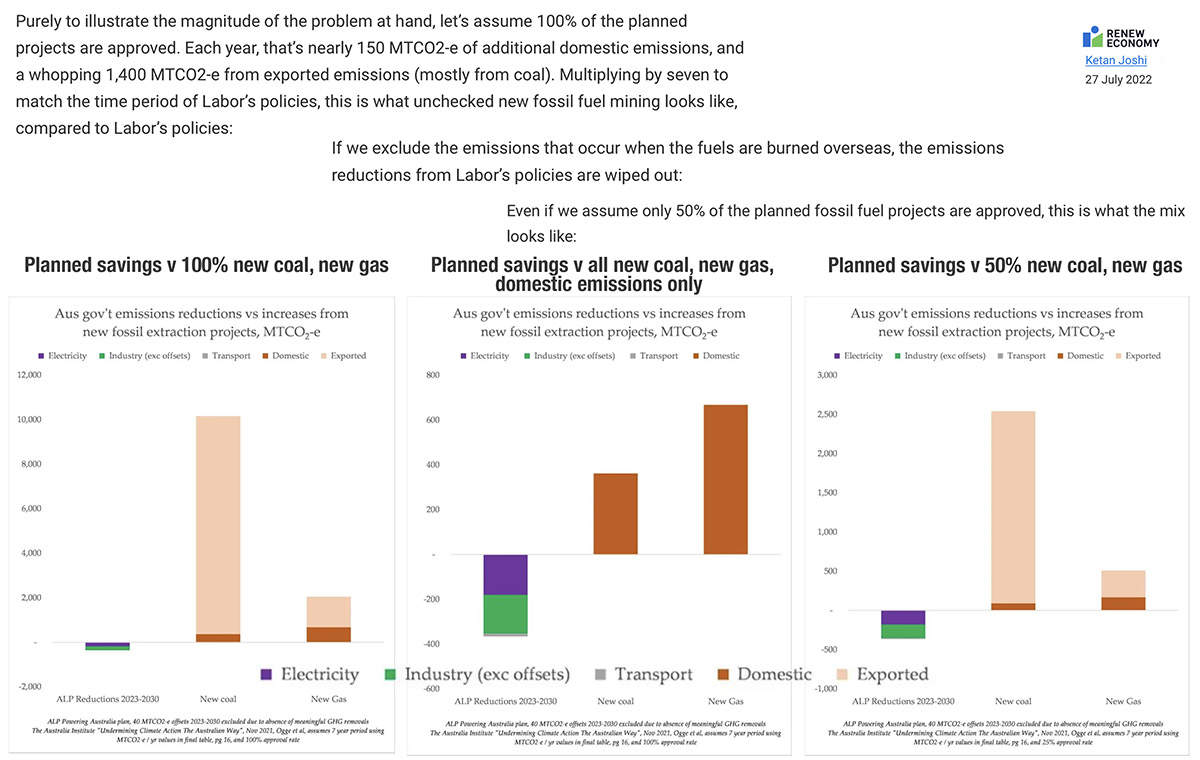 What should we be doing?

Further steps are essential to make the best of this carefully crafted, small target Bill. As well as making sure that Australia ups targets, quickly getting “on the path to much steeper emissions reductions this decade” the Climate Council lists further steps:

The Climate Council notes that similar legislation “in places like the UK and Ireland .. has played a role in reducing emissions, helped those countries adapt to climate impacts, increased climate ambition, and helped to remove the politics from the climate change debate.”