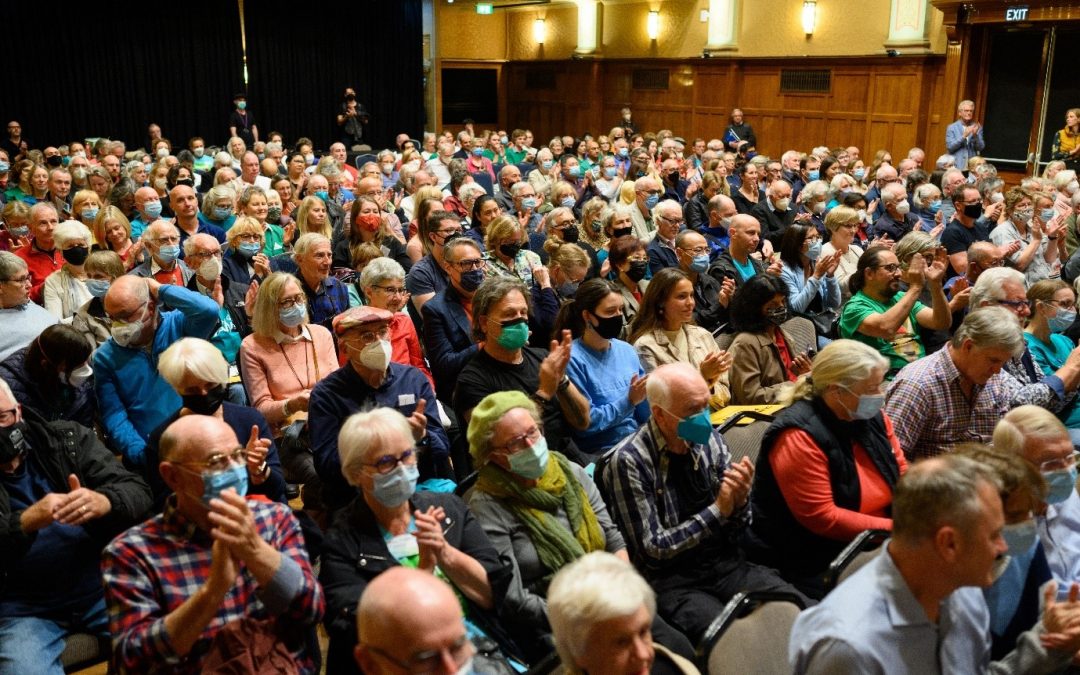 On Wednesday 27 April, a packed hall of around 500 people (plus 200 more on Facebook Live) heard from candidates Dr Peter Lynch (Labor), Mr Piers Mitchem (Greens) and Dr Monique Ryan (Independent) how they would represent the voters of Kooyong with a particular focus on climate change action. The recommended way to watch the event is on YouTube.

There was quite a buzz in the foyer as volunteers set up, people arrived and the hall filled.

The Member for Kooyong did not participate

One of the few spare seats at the Hawthorn Town Hall last night was reserved for Mr Josh Frydenberg MP, the Member for Kooyong.  Despite Mr Frydenberg’s failure to show, there was much media interest, and the empty chair was a popular photograph. Both Channel 7 and Channel 9 were there to cover the event. 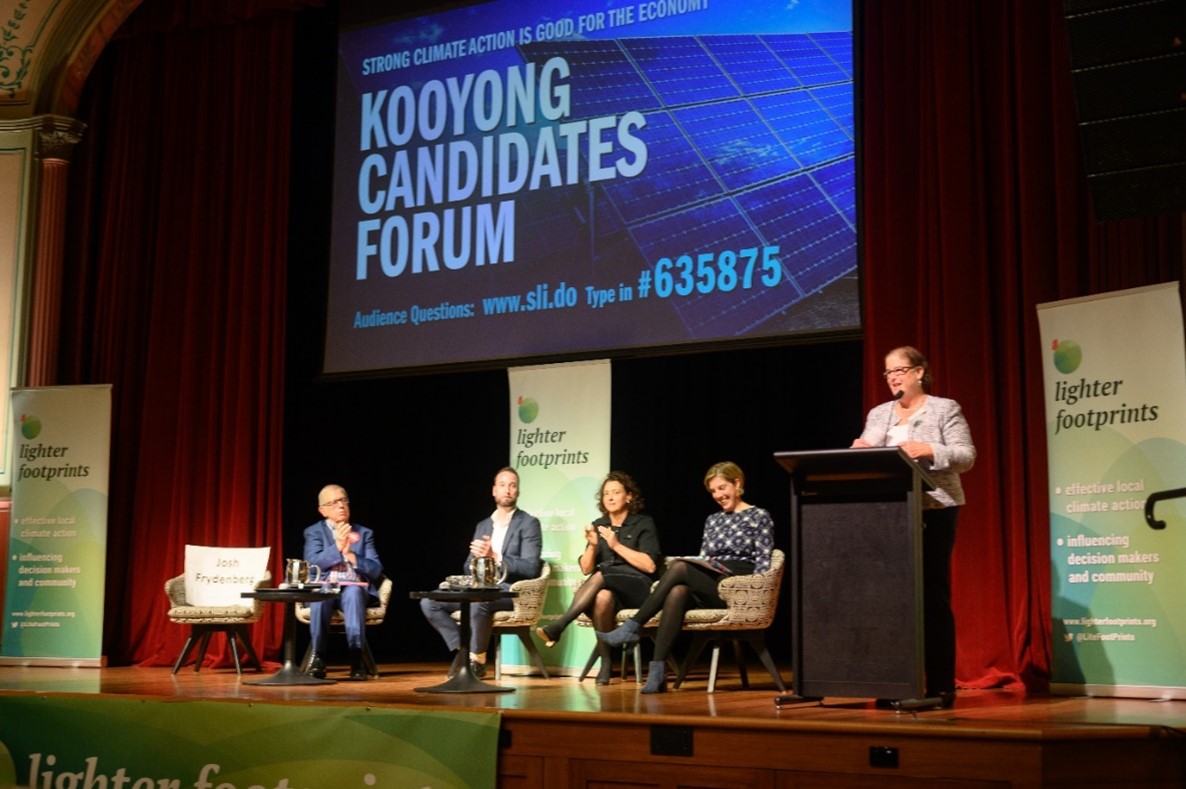 Lighter Footprints co-convenor, Lynn Frankes expressed disappointment in Mr Frydenberg’s failure to attend “without providing an explanation to us.” Despite Mr Frydenberg’s claims earlier in the week, Ms Frankes assured the audience that Lighter Footprints had “no connection to the Labor, Greens or Independent campaigns.” This statement received a hearty round of applause. Ms Frankes went on to explain that the empty chair had been placed on the stage to symbolise Mr Frydenberg’s “unwillingness to engage with, and be accountable to, the voters of Kooyong.”

Two of the loudest rounds of applause however went to the two secondary school students Mia Harrison a Year 11 student from Melbourne Girls College and Emily Harle a Year 12 student from Strathcona Girls Grammar School. When introducing the girls, Lighter Footprints co-convenor, Mick Nolan quoted the School Strike for Climate website demanding that “our politicians take our future seriously & treat climate change as what it is: a crisis.​” 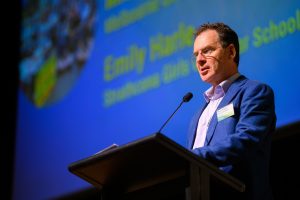 Both girls spoke about their love for the environment, their school programs and why they were involved in climate change action.
Mia explained why she joined the School Strike movement. “If individual people band together, maybe our political leaders will listen and it’s possible to make a difference. However, there’s only so much us kids can do. We’re not old enough to vote and we have to yell at the Old Treasury building to be listened to.” She urged the audience to “Band together as a community in order to make a difference.” 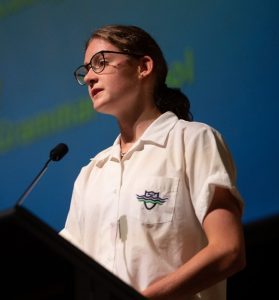 Emily, a student of Geography and Economics asked “Why do we as an extremely wealthy country repeatedly fail to do our bit to reduce climate change?” She sees the shift away from fossil fuels as “an opportunity to harness our wealth and vast resources to secure our future prosperity” to become a “world leader in renewable energy.” Emily said she wants the government to “lead the charge for a better tomorrow” and develop a plan that “all Australians can unite behind to secure a better future for the generations to come.” What a pity Mr Frydenberg did not hear these two young and articulate residents of Kooyong. 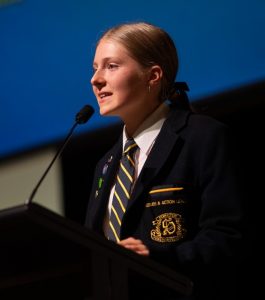 The first words of moderator Victoria McKenzie-McHarg, Strategic Director at Women’s Environmental Leadership Australia were, “This doesn’t happen in every electorate, on a Wednesday night, to have hundreds of people turn up to support democracy, to talk about climate change. Go Kooyong!” 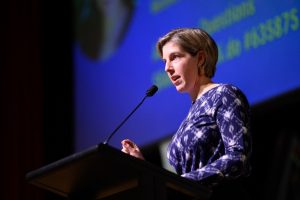 Labor candidate Dr Peter Lynch reminded the audience of Labor’s past achievements in climate change policy and highlighted its Powering Australia program released in December 2021 featuring rewiring the nation, solar banks and community batteries. He said Labor would “legislate the 2030 and 2050 targets” and “restore national leadership on climate change.” 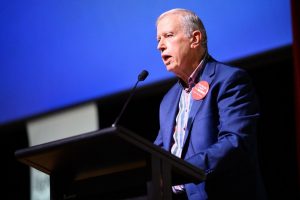 The Greens candidate Mr Piers Mitchem expressed frustration as to how the Australian government could act against the scientific advice and continue to “open more coal mines and gas wells.” He said if the Greens had the balance of power, they would move to place a moratorium on new coal and gas, end thermal coal by the end of the decade and ensure a just transition for workers. His finishing line, “Let’s make our kids proud and shoot for the stars” was well received. 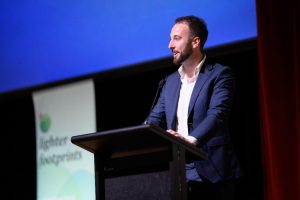 Independent candidate Dr Monique Ryan emphasised the importance of community and the “extraordinary opportunity to change the course of Australian climate history.” She is excited about the economic opportunities offered by the export of renewable hydrogen, ammonia, and steel. Dr Ryan promoted her electric vehicle policy saying, she has committed “to legislate on vehicle emissions standards, provide a $5000 rebate for electric vehicles, and support the manufacture of electric batteries in Australia, providing jobs in regional communities.” 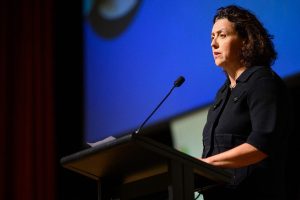 In the invitation to the Forum, all invited candidates were told that if they were unable to attend, Lighter Footprints would provide a speaker to outline their climate policies. Alex Currell from the Kooyong Climate Change Alliance (KCCA) explained how Mr Frydenberg’s policies measured up against the seven policy areas scored on the KCCA candidate climate scorecard 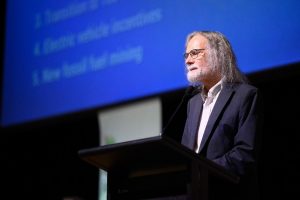 The candidates then responded to questions from Lighter Footprints and the audience. One of the funniest moments of the evening was the lost microphone moment. It was found on Mr Frydenberg’s chair and was passed to Dr Ryan. The candidates went on to answer climate-related questions about emissions targets, legislation, “big money” and political donations, media ownership, vulnerable people and diverse communities, retraining, and biodiversity loss. This Q&A section commences at approximately 00:46:00 in the Facebook Live recording. 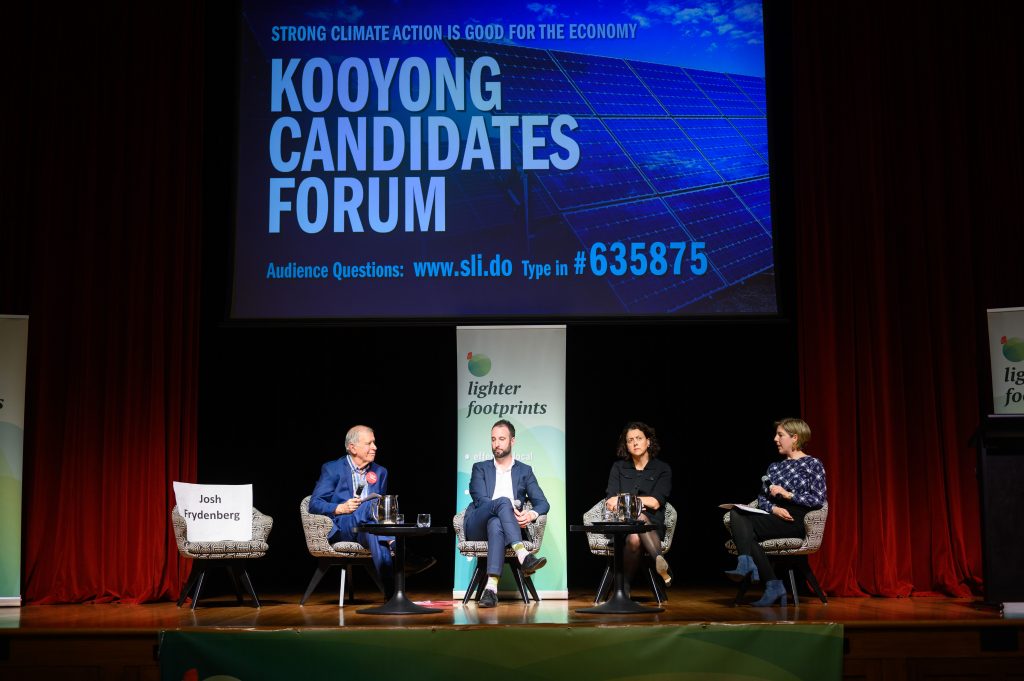 At the end of question time, each candidate was asked a unique question by the moderator. The questions and answers provided here are summarised and paraphrased. For the full Q&A listen to Facebook Live from 1:16:30.

Moderator: “The ALP has had internal divisions on climate change policy over the past years. If you were elected, how could the people here tonight trust that you would deliver in line with the policies you’ve committed to tonight?”

Dr Lynch: “I would be a strong advocate for climate change, the environment, refugees and First Nations. As a Labor MP, I would like to play a similar role to that of Petro Georgiou.”

Moderator: “The Greens are often accused of being unrealistic with policies that push too hard, too fast – unable to deliver. Why would this scenario be any different and how would we trust that you would work constructively to achieve outcomes?”

Piers Mitchem: “This narrative that the Greens are unrealistic and can’t deliver is false. The CPRS was bad legislation and Bob Brown was right to vote it down. It would have allowed emissions to go up and allowed fossil fuel companies to be paid to emit. In the 2010 power-sharing Parliament with the Gillard government, the ETS was introduced – the only time when emissions went down. We also got dental (for children) into Medicare. The Greens have the most ambitious climate targets because we are in a climate crisis. If we adopt less than perfect targets, we need to explain why.”

Moderator: “Dr Ryan, you are running against a long-established MP, the Treasurer, who has a lot of influence to get things done, and if elected you would be an Independent without the support of a Party, why should this audience believe that you could deliver? Furthermore, if we have a hung parliament who would you support and why?”

Dr Ryan: “A lot of people had great hopes when Josh Frydenberg was first elected. Twelve years later he’s been the Minister for Energy, the Minister for the Environment and the Treasurer. During that time he’s remained in a minority government held to ransom by the National Party. That is not going to change if the LNP is re-elected. He has his own ambitions and has never crossed the floor. I felt I had to step up and try and take action on an existential threat to our planet. I know that if I am elected and am part of a group that has the balance of power I will not be swayed by personal ambitions, factionalism or backroom interests in standing for what I think is important: integrity and honesty in government, and strong action on climate change.” 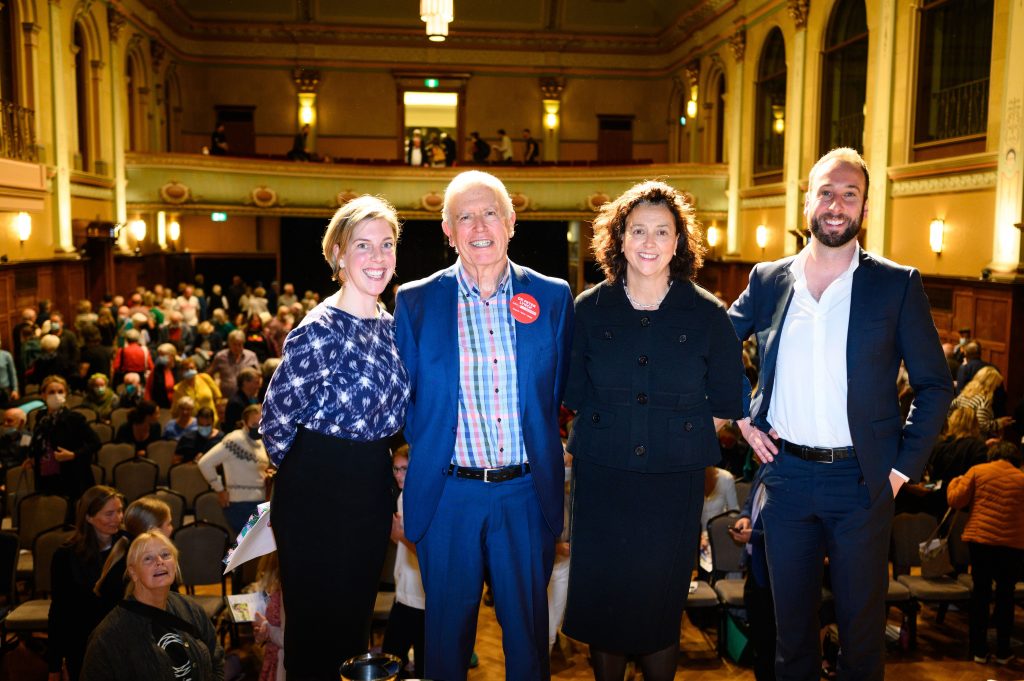