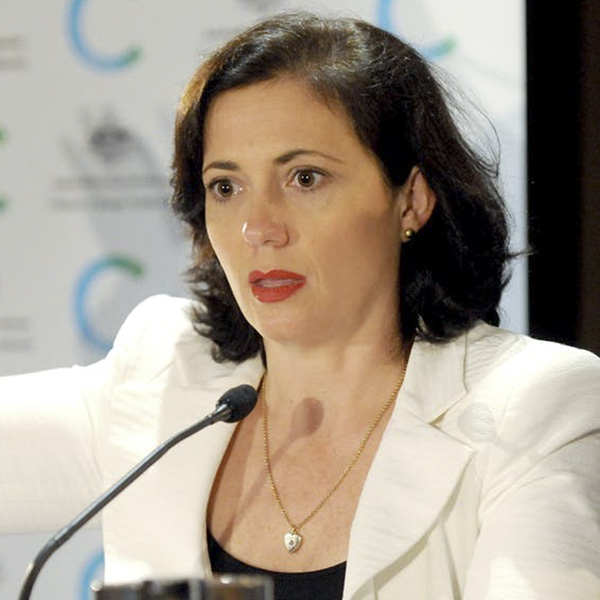 “One of the country’s most experienced climate policy practitioners”. This how Frank Jotzo described Anthea Harris when lamenting the Abbott government’s spree of public servant sackings over carbon predicting her probable demise as the CEO of the Climate Change Authority: “By all indications, the Authority has been taking very seriously its task to critically evaluate the evidence and form well-supported recommendations for policy. The Authority employs some of the sharpest climate policy analysts in Australia, led by Anthea Harris.” Anthea is presenting a Victorian perspective at our upcoming Forum, Living in a Clean Economy. She will be joined by Prof Tom Kompas and Prof Peter Newman. Please RSVP here.

Anthea Harris has held many important positions as an economist and is considered to be one of Australia’s leading experts on emissions trading. Anthea’s current role is Lead Deputy Secretary, Strategy and Planning at the Department of Economic Development, Jobs, Transport and Resources (DEDJTR) – she is also has leads the Energy Unit at Victorian Department of Environment, Land, Water & Planning (DEWLP). She was the inaugural Chief Executive Officer of the Climate Change Authority, which provided the Targets and Progress Review report which has been referred to ever since as a benchmark for ALP, LNP, business and Australian climate targets. You can listen to Andrea presenting the report here, including advice about emissions reductions targets, and responding to questions here.

Even though the original graphs presupposed our emissions would trend down from the mid 2010’s, and hence Australia’s situation regarding carbon budget is considerably worse due to the continued rise in our emissions since the repeal of the Carbon Tax, the advice presented in the Report is even more pertinent: “Stronger early action also preserves Australia’s options and flexibility to respond to new information. For example, if new climate science indicates the impacts of climate change are worse than currently understood, it may be appropriate to tighten Australia’s emissions budget. Using too much of the budget early closes off this possibility.” 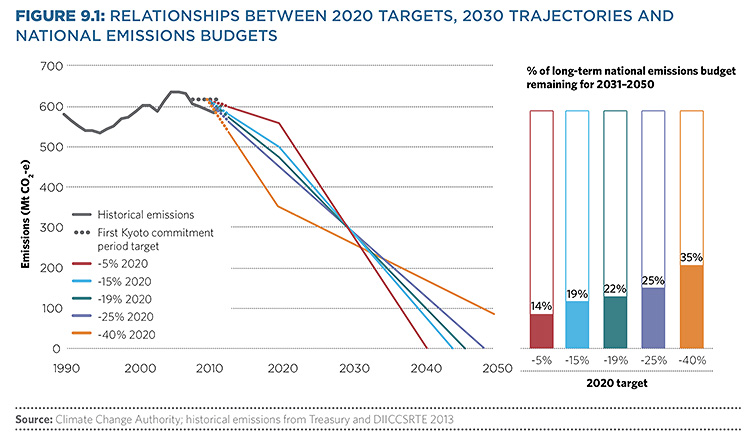 Anthea Harris said “.. it is in Australia’s national interest to support international efforts to try and limit the effects of global warming to 2 degrees above pre-industrial levels. This is very important to the welfare of future Australians”, when presenting the Targets CCA Report.

One of her consistent themes has been to need to continue to consider “a full toolkit” of policy levers, including forms of carbon pricing and emissions reduction standards in vehicles where Australia continues to lag behind other industrialised nations. Andrea held senior roles within the Department of Climate Change and Energy Efficiency, led the Secretariat for the National Emissions Trading Taskforce and held positions with the Victorian Department of Premier and Cabinet and at the Productivity Commission:

Anthea’s roles have included working with state and territory governments to design a national emissions trading scheme, a task she says was like “herding a pack of cats”. Her design was drawn on heavily by the Howard Government in their taskforce on emissions trading scheme. Emissions trading formed the basis of her career for many years. Crikey described her as a premier “carbon cutter“: “There is no other person in the country that could claim to have been as heavily involved throughout almost all the various initiatives that have sought to design and implement a price on carbon pollution.”

She was instrumental in the design and management of The NSW Greenhouse Gas Reduction Scheme (GGRS) under the Carr Govermnent. The GGRS  gave other states in Australia the impetus to undertake market based measures to reduce emissions.

Anthea said in 2015; “If we continue to take the myopic view of just thinking about the next step it will never add up. We need to take the long-term view.”  As the years have passed, this long-term vision has become even more urgent.

In her current role with DEDJTR, Anthea brings a wealth of knowledge about how future technology and moving towards a low carbon economy, will affect the Victorian economy and change the kinds of jobs Australians will have in the future.

We hope to hear Anthea’s views on the future of the Victorian economy under a shift to a clean economy. Her experience with emissions trading schemes in Australia gives her the knowledge and authority to talk frankly about what kinds of measures we can expect to keep Australia to its emission reduction targets. The Energy Group that Andrea leads is tasked with supporting current and future energy projects, programs and reforms, including strategic work to support major energy transformations. Anthea can speak to the kinds of schemes Australian and International governments can implement to begin the vital work of decarbonising the economy. What industries will grow, and which will no longer be needed in a low carbon economy? How will that change the kinds of jobs people do in short, medium, and long-term future?

How will Andrea Harris bring her rigorous methodology, and transparent working through of objections to the complexities of her current roles in the minefield that passes for energy policy in Australia? Given that Andrea might well feel justified in considerable disappointment in the frequent reversals applied to the hard won gains in carbon policy that she has overseen, we will be interested in how this vast experience with what she describes as the “rollercoaster” informs her current task, to design, support and implement change in Victoria’s energy landscape.

Along with environmental economist Prof Tom Kompas and lead IPCC author and sustainability expert Prof Peter Newman, Anthea Harris is speaking at our upcoming forum on October 31 at the Hawthorn Town Hall. This will be a chance for you to ask questions about what is happening right now in Victoria, and what her department is doing to prepare Victoria for a clean green economic future.