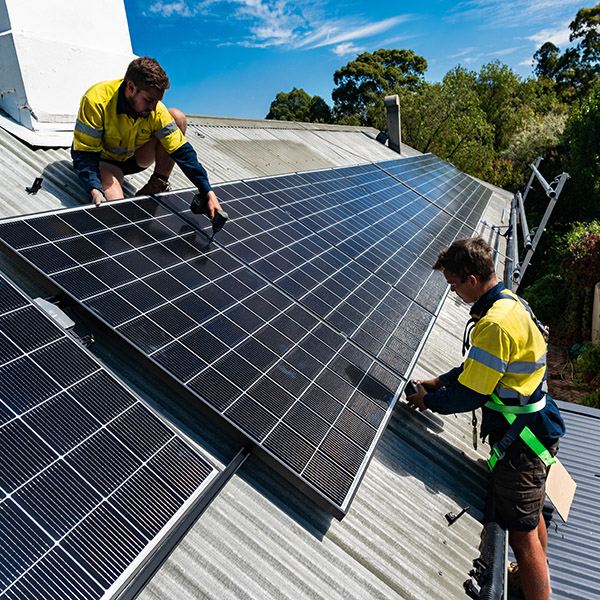 However, for many people wanting to install solar, they often face difficulty in deciding the type and size of solar rooftop installation or finding a reputable supplier.

Generating your own energy

‘I have been keen on solar since my first installation in 2010’ says Rob Brown, Camberwell resident.  “Reducing climate impact and household costs were our reasons for installing. It also gives the feeling of taking back some control.  More recently, for our second solar installation, we went for a 5 kW system with 6 kWh of batteries. If we ever do another one it will be as big as possible with as much battery size as we can afford.”

‘We have tried to do our bit for tackling climate change by installing solar panels’ says Peter Hartley, North Balwyn resident. ‘The results were so pleasing, that a few years ago we installed more panels and ”maxed out” our roof. The new panels have more than twice the output of the original panels. We now have hot water, heating and electrical cooking, mostly powered by the sun’.

Carolyn Ingvarson recently upgraded her solar system and is moving the whole house away from gas, with induction cooking and new heat pumps. She sees the additional solar and energy self sufficiency as adding the value of a period home, and as an important family contribution to climate action.

This raises a couple of other questions that often arise. If my roof faces east-west rather than north-south will solar work for me?

Mick Nolan explains, “I agonised a bit about whether to put the panels flat on the roof or put them on frames facing north-east on an east pitched section of our roof. In the end I went for frames but there is a lot more technical advice available these days about how to optimise panel orientation and any shading issues”.

Rob Brown also has a comment on orientation: I would also go east-west with the panels rather than north facing”.

We spoke to East Kew resident, John Gare about whether he had any ongoing maintenance issues. “Our 1.7 KW array installed in 2008 was the first in the street. In 2016 we had to have one panel replaced due to electrical shorting where water had seeped under a seal at the edge of the solar rooftop panel. This was done without too much trouble, and we found a recycling depot to accept the unserviceable panel.

A few years ago we then we added another array of 11 x 300 watt panels on the flat roof of an extension to the west, giving us a total of 5 kW, each array with its own inverter”.

Russell Williams thinks he should have probably cleaned his panels a little bit sooner (its been closer to ten years than five), but says its not really a big deal!

Reducing emissions for a safer climate – panels make other actions even better!

Russell Williams enjoys the convenience of his electric car, and feels good that by charging during the day he is maximising his solar usage!

Mick Nolan says “Putting solar panels on our roof a few years ago was one of the best decisions we’ve  made. It still amazes me that this group of panels on our roof can make electricity which powers our refrigerator and dishwasher during most days.  Installing solar is great local climate action. I’d much prefer to convert sunshine to electricity and reduce our electricity created by burning brown coal”.

Some people worry about how many years it will take to payback the expenditure on solar panels. The general consensus is somewhere between 3 to 6 years, obviously depending on whether you are in Hobart or Tennant Creek, the size of your system, and your usage patterns.

Many look at it another way and say that solar panels actually add to a house’s re-sale value.  So while there is upfront cost, there are immediate, significant reduction in your energy bills as well as your carbon footprint.

So there are many positives.

Perhaps Lynn Frankes sums it up, “We put a 2kw solar system on our roof in 2008. I can remember a great feeling of relief when the panels were installed – we were now part of the solution. We had done quite a bit to reduce our consumption, including a home energy audit, but generating your own electricity takes you to the next level.”

Another way of looking at solar is energy security, rather than as strictly as energy bill reduction

Lynn Frankes says “I think some people think putting solar on will eliminate their electricity bills. That hasn’t been the case for us. We get credits in the summer and small bills in the winter. I think of it as an investment that reduces our ongoing expenses as we enter the age of retirement”.

Many people have upgraded their systems given current reductions in PV system prices, or are considering adding solar right now. At that point the question of batteries inevitably arises, particularly if the household has a reasonable evening usage profile, and the system is of a medium or larger size. 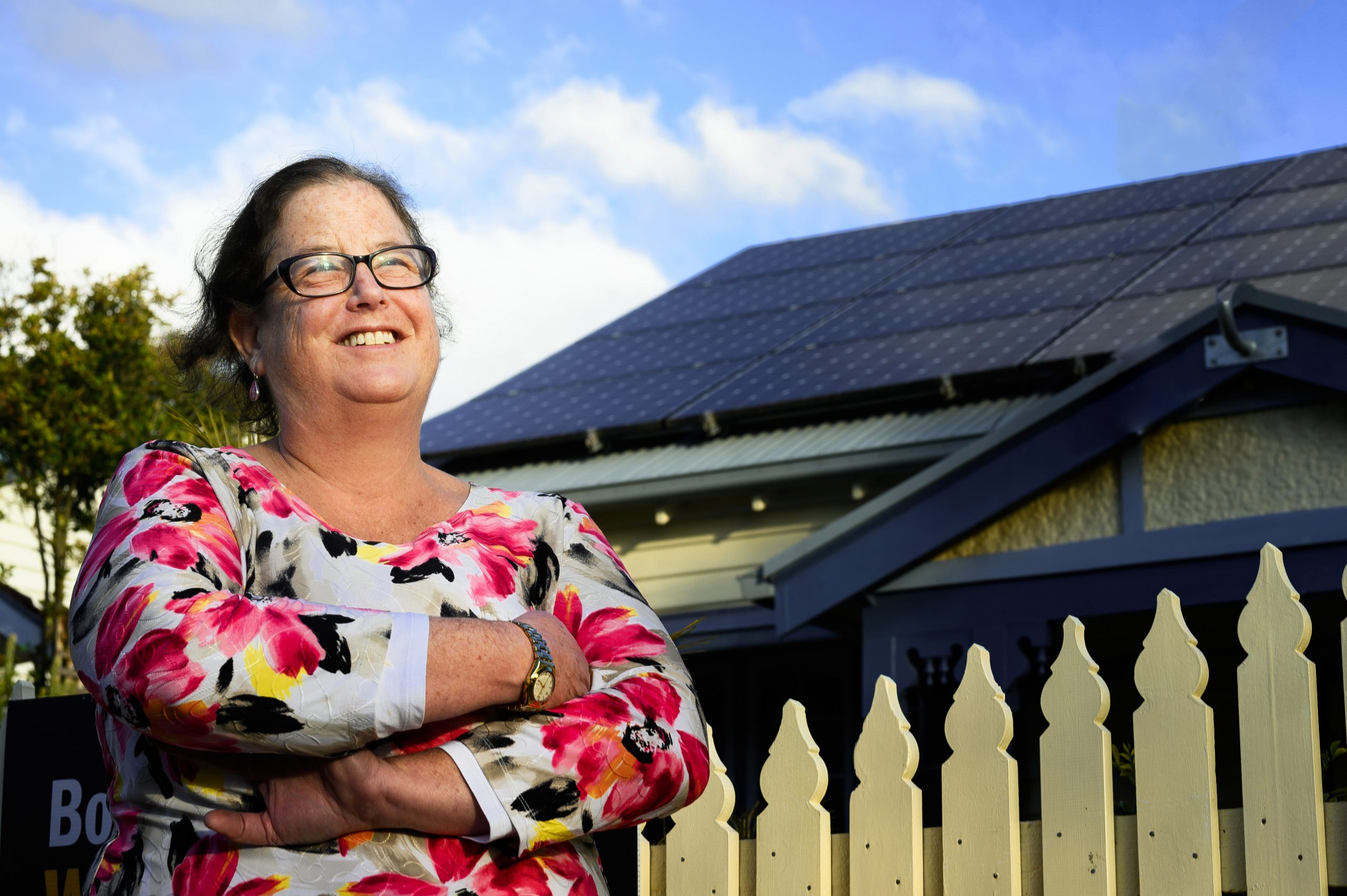 Lynn Frankes says “We upgraded our system a few years ago when the roof needed replacing with colour-bond. We chose a 10kw solar system in anticipation of putting in a battery when the price comes down a bit more. Who knows, maybe a community battery will be a better option, or I am quite interested in the idea of using an electric vehicle (EV) to act as the home battery. Having solar does make me think more about how we use electricity. We don’t run the washing machine or dishwasher at night, for example.”

For many people, it would take many hours to research these issues, particularly in lockdown where it is much more difficult to compare solar suppliers and installers.

This is where access to experienced advisors, such as those at Yarra Energy Foundation via the MCPH Solar Program, can be very helpful. YEF have collectively been responsible for advising 13,000 households and business and directly involved with the installation of 18,000 panels through the Yarra Solar Program, now extended into the MCPH Solar Program running right across Metro Melbourne through the community partners. YEF has been selected to lead the new Metro Community Power Hub, supported by State Government funding to help community organisations like Lighter Footprints drive down emissions at the local level.

The MCPH have rigorously tested their suppliers and installers and the advisors are able help you asses your situation and recommend appropriate approaches, considering factors such as orientation, roof type double or single stories, household needs, and heritage issues.

Is 2022 your year for solar? If you are interested in learning more, extended your solar or considering a battery, RSVP to our Make Solar Easy information night on March 16th. You can also check our solar information page here, read our solar advantage blog, or connect directly with the MCPH Program here.