Is a ‘gas-led recovery’ a road to nowhere? 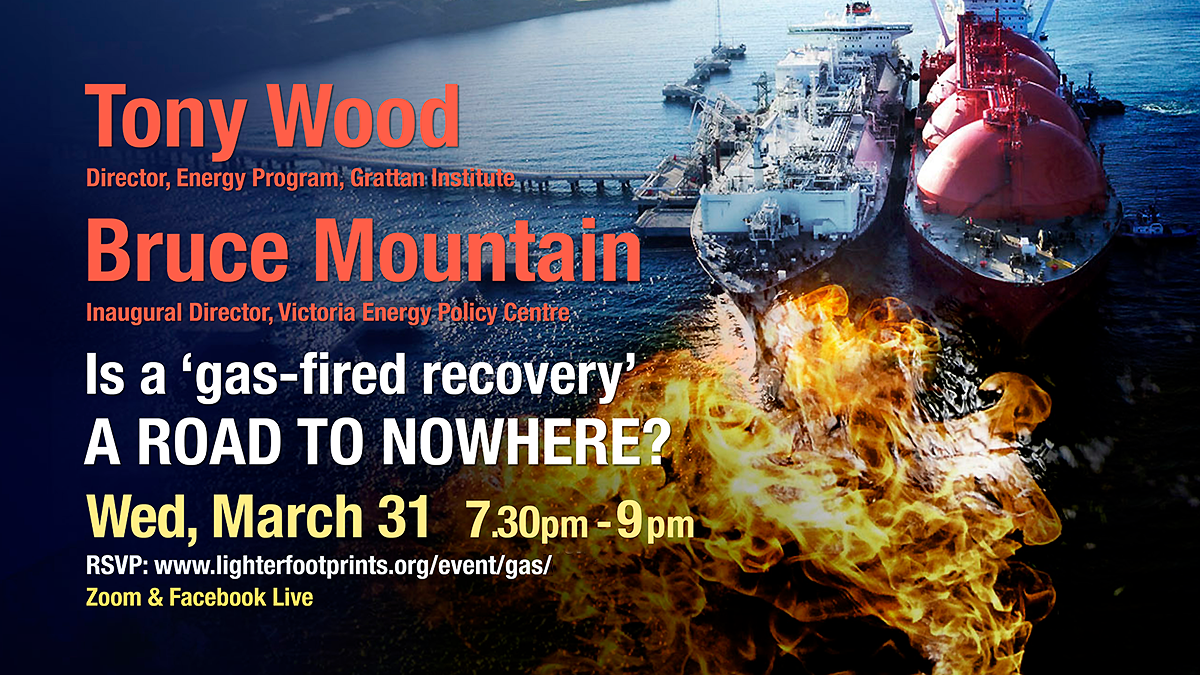 Join us on Wednesday 31st March 2021 to hear from two excellent Speakers – Tony Wood and Bruce Mountain – on where gas fits into the picture for the Australian and Victorian energy mixes (if at all!).

Gas pricing is high and is widely forecast to remain high. And gas emissions must come down under the Paris Agreement and future climate-budget scenarios. As a consequence, gas demand is in a downward spiral, due to the price and due to climate imperatives. Victoria and other southern states are already getting on with the renewables electricity transition. And the world looks set on developing green Hydrogen as the new ‘fuel’ for steel-making, high-temperature industry, and export. So, what does this all mean for gas?

Tony Wood is at the Grattan Institute. Tony has been Director of the Energy Program since 2011 after 14 years working at Origin Energy in senior executive roles. From 2009 to 2014 he was also Program Director of Clean Energy Projects at the Clinton Foundation, advising governments in the Asia-Pacific region on effective deployment of large-scale, low-emission energy technologies. In 2008, he was seconded to provide an industry perspective to the first Garnaut climate change review.

Tony will look at the broader regional factors that have resulted in gas being expensive and subsequently gas-use declining, and why it is set to remain that way. He will touch on international influences such as the Biden election and his executive action to tackle climate change. Tony will look at what our Federal government should do to begin planning for a future without natural gas, or at minimum, gas in a minor role.

He will point to the low emissions alternatives such as renewables-based hydrogen and renewables based electricity. Moving away from gas could have some perceived short term pain for the long term gain, so discussing the rationale widely is essential.

How should Governments be approaching the situation, at Federal and State level? What should Lighter Footprints be saying in our Letters and meetings with our politicians?

Bruce Mountain is the inaugural Director of the Victoria Energy Policy Centre. He is a well-known Australian energy economist whose research and advisory work has focused on the economic regulation of network monopolies, the analysis of retail energy markets, and the design of emission reduction and renewable energy policies. Bruce has been a long-standing advisor to governments, regulators, market participants and interest groups in Australia and internationally. Bruce has been analysing the overall Victorian energy transition to low emissions at the lowest cost for a number of years.

With the decline of the Bass Strait gas fields, and the recently announced Altona refinery closure by Exxon-Mobil, Victoria finds itself dependent on expensive gas and imported oil. All resulting in less fuel security for Victorians as well as less jobs.

This might be the perfect storm economically for fossil fuels as the global pressure ramps up to reduce carbon emissions. Bruce will share his views and some analysis of the road to a better future. A road that lessens the energy cost for households, while reducing emissions in line with Victorian legislation and the Paris Agreement.

How should Victorian Government do this? How can Lighter Footprints support and advocate?

Join us at 7.30pm, Wednesday 31 March on Zoom and Facebook Live.