What a year! Thanks to Lighter Footprints members from Carolyn Ingvarson 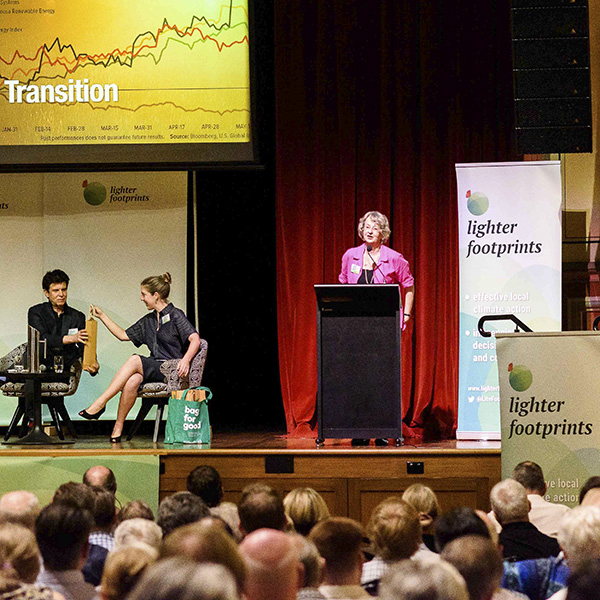 When I look through the events of this year, I am taken aback with the wonderful amount of work in our community that Lighter Footprints members have achieved – our monthly meetings, small group work, forums, submissions and putting the case for climate action, and I would like to extend my thanks to you all.

Here are some of the highlights:

So that is over 50 meetings and over 2000 attendees! We also did 7 submissions to enquiries at the three levels of government, and spoke to U3A The Lyceum Club and Probus, ran stalls at several Community festivals, and of course many members contributed to raising awareness of climate action at the recent elections.

Our meetings also covered a wide range of topics – here is a reprise along with some notable highlights:

April: Election forum   –  Is climate the issue of the moment? – 6 candidates with Barry Jones  –  600 audience at Hawthorn Town Hall

July: Waste and Climate – Problem or opportunity, Mat Genever from the State Govt and Natasza Purser from Boorondara Council

November: Powering up for Summer  Dylan McConnell and Ric Brazzale

And I would like to extend special thanks to our hard working committee and Lighter Footprints core volunteers and leaders of our action groups and working groups.

So special thanks to:

Other committee members include Ray Peck, volunteer coordinator and special work on forums; Julian Atchison working on the website and many other jobs, Rob Brown, energy and submissions; and Ken Parker on data base of our members.

But it doesnt end there. Many others continue to work on a range of projects that are fundamental to Lighter Footprints, and there are too many to identify  all of them- but here are some – Sally Newell, Comms, graphics, lifting our brand and a driver of our strategic thinking; Simon Grosser has been helping us build a new website; Matilda Bowra offering professional media services; Julian Meehan whose amazing photos have been used around the world and that make our work look so much more exciting than it really is! Malcolm Cameron who has helped build a unique writers group focused on letters to the paper which has tried to be copied by other groups with much less success than Malcolm has achieved – thanks also to our star writers – Barb Fraser, Bev Macintosh, Bill Chandler to mention but a few. And thanks too to Tam An, especially for work on the Climate Emergency Declaration petition with Jean Christie, Julia Croatto and Lynn Frankes.

This is just a taste of the group that makes up Lighter Footprints – a small committee and wider group of core supporters, with over 350 on our Action list and nearly 2000 on our News list.

Thank you again for your many contributions, for making this such a special group where we can have fun together, and for working to build Lighter Footprints into a powerful voice for clean energy and climate action in Melbourne’s inner east.