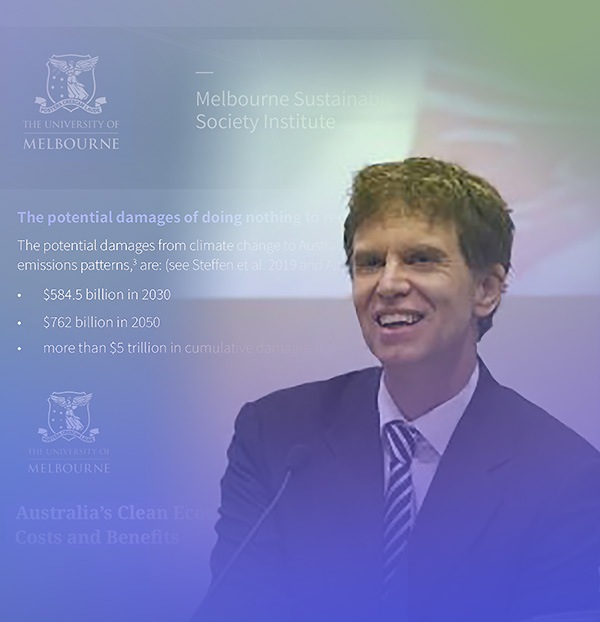 How can Australia prevent a $584.5 billion dollar loss by 2030? Or a projected cumulation of more than $5 trillion in losses by 2100? Or save $14,000 a household every year over the long term? Professor Tom Kompas works on these problems, and more, to show that the benefits of transitioning to a low emissions economy far outweigh the costs of inaction or ‘business as usual.’

Tom Kompas, a Professor of Environmental Economics and Biosecurity at The University of Melbourne, models the future economic costs of failing to act on climate change and the costs and benefits of moving to a clean economy or low emissions economy. He’s the founding Director of the Australian Centre for Biosecurity & Environmental Economics at ANU in Canberra, and a well-recognised authority on government policy in the Asia-Pacific region.

A clean economy, is one that no longer relies on polluting industries to power our homes and industries, among other changes. His and his colleague’s work shows that the costs of inaction are much higher than the costs of emissions reduction. “The Cost and Benefits of a Clean Economy” report is the first to describe, globally, the cost of inaction versus the benefits of transitioning away from our dependence on fossil fuels for each country in the Paris Accord.

Tom has modelled the costs of Australia not meeting its commitments to the Paris Agreement. Globally, failure to keep warming to under two degrees is predicted to cost $23 trillion dollars a year in lost GDP. These staggering losses come from diminished capacity to use land for agriculture and other human uses, as well as land loss to erosion and other natural forces.

The costs of investing in renewables and taking efficiency and other measures is negligible compared to the cost of inaction. And the cost of inaction ignores the costs of increased weather events, floods, bushfires and other natural disasters.These cold hard numbers are a way to quantify the choices faced by leaders today. In the words of James Carville “It’s the economy stupid.”

Tom and his co-authors focus on many aspects of a clean transition in their modelling of economy. Renewable energy provides a happy success story and an example of how moving to a low emissions economy can grow new sectors and lead to economic gains. Moving to a clean economy reduces risks in many areas, legal, physical, and economic, none of which should inflame leaders who want the best for their constituents. A clean economy grows jobs, reduces pollution from industry and works to find ways to make existing practices, such as agriculture reduce their carbon emissions. These transitions are already taking place around the globe, and Australia risks being left behind if we fail to adopt the latest technology and transition our economy to a clean and just future.

Listen to Professor Kompas on October 31st
Tom Kompas will be bringing his expertise to bear on the case for a faster transition to a clean economy in our upcoming forum at the Hawthorn Arts Centre. Please RSVP here.

2) Will Steffen, Tom Kompas and others looked at the compounding threats and damage from climate change on the Australian economy for the Climate Council and concluded that climate change is a major threat to Australia’s financial stability, and poses substantial systemic economic risks. Damage to agriculture (halving productivity in the Murray-Darling and WA by 2050), and the property market, will be very high: “The property market is expected to lose $571 billion in value by 2030”.

3) Tom Kompas combined results from the MSSI paper and the work for the Climate Council in an article in Pursuit. The relatively low costs of action have been informed by improved prices of renewables infrastructure. “The longer we wait to act and bear any of the costs, or the more we pass on to the future, the larger this per person cost becomes.”

4) Check out Nick Baker’s report for SBS looking at Tom Kompas’s work on the impacts of climate inaction: the first large dimensional model that “breaks down costs to individual countries.”

“Prof Kompas said the team was surprised with the numbers.”

“Economists around the world have largely underestimated the damage from climate change … Previous works have not come even close to the $23 trillion in global damages,” he said.”this is the equivalent to the world experiencing four to six 2008-style global financial crises every year.”

Of particular note is the discussion even the use of this updated modelling (GTAP), even with some allowance for shocks, does not really have enough allowance for randomness: “given the lack of a random component, it is not possible to include the effects of natural disasters or more extreme weather events that occur year to year in the model. The costs of these can be considerable. For now, all that is captured is the effects of SLR, changes in agricultural productivity, and key healtheffects. Indeed, some of the significant effects of actions concomitant with global warming, such as the effectsof air pollution, losses in biodiversity, the spread of invasive species, changes in energy mix, and the costsof significant migration, are also not included. Capturing natural disaster shocks and these other effects is possible in GTAP modelling, but it has not been done for the global economy to date.”  The obvious conclusion is that these figures projecting the costs of inaction, large as they are, may be very much on the conservative side.