The Feds are cooking the books on Paris

In November 2016, the Australian Government officially ratified the Paris Climate Agreement. But in the lead-up to the last Federal election in 2019, the Morrison Government began a misleading campaign that Australia is ‘on track’ to meet its emissions targets. This involves some ‘clever’ accounting. We shine a light on the ‘clever accounting’. And at the end of this Blog, we list the actions you can take.

In this Blog, we explore what Scott Morrison means when he says, ‘Paris in a canter’, and we look at how far off the mark Tony Abbot, then Prime Minister, was in July 2015, when he said, “Australia is different from a lot of other countries,” because “when we make commitments to reduce emissions, we keep them.”

The year is 1990.
For the last decade, huge bulldozers have been clearing land to clear up to 500,000 hectares of native bushland each year in Queensland. But in 1990, the new Goss State Labor government, signalled that, after 1991, permits would be needed to clear native bushland. Unsurprisingly, in anticipation of this legislation change, land clearing reached a record 765,000 hectares in 1990. Huge bulldozers using chains were unleashed on native bushland a massive scale.
In the year following the introduction of permits, 1991, land clearing shrunk by 57.5%.
As a result, Australia’s emissions fell significantly from 1990 to 1995, due to the Qld Government action to reduce land clearing.

Move on to 1997
The world is getting serious about Climate Change. The United Nations Climate Change forum will be in Kyoto, Japan. The historical Kyoto Protocol base-year will be set at 1990. John Howard has two brain-waves.

Howards’ ‘clever’ scoping to include land-use, and start at 1990, meant Australia could get away with no action on emissions under the Commitment Period, CP1.

The year is 2010
We move to the UN’s Cancun (Mexico) Climate Change Convention. Commitment Period 2, CP2.
The next clever accounting trick is to set the Australian target using 108% of the 1990 emissions. As the start point for 2010. Once again, we are able to do very little, and Australia ‘over achieves’ by 284 Million Tonnes in the CP2 period. 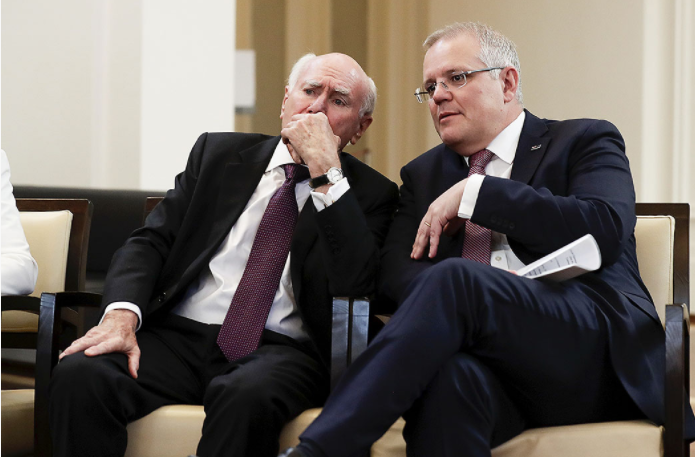 Carry on carrying over: Kyoto-era prime minister John Howard with PM Scott Morrison at the opening of
the UNSW Howard Library at old Parliament House in December 2019. Alex Ellinghausen/Fairfax Syndication 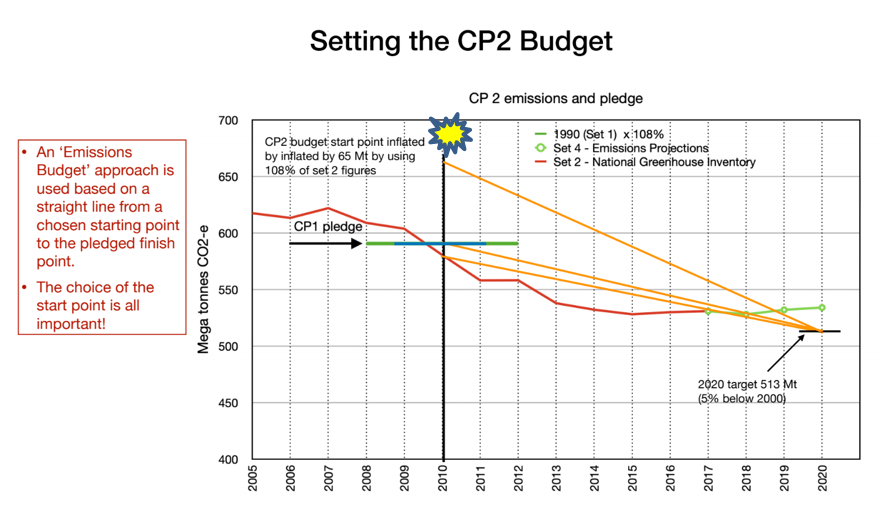 NOTE: The ‘red’ line is the greenhouse inventory. Australia set its CP2 start point up by 65 Mt (shown by ‘yellow star” ) using a ‘clever’ and ‘more convenient’ set of Land-use figures (LULUCF). Using this start point created an extra ‘credit’ of 185 Mt over the CP2 period. (Graph by Mike Hassett).

As if that was not enough, in 2019:
The third chapter is the cynical or ‘clever’ decision by the Morrison Government in 2019 to glibly tell the electorate we are doing our share to reduce emissions, while employing dubious accounting, and acting in contravention to the international spirit of climate action. The accounting trick is to ‘carry forward’ the ‘over achievement’ for the two Kyoto Periods CP 1 and CP 2.
If Australia uses the carryover credits in the way it has proposed, it will reduce Australia’s 2030 target from 26% to only a 14.3% reduction below 2005 emissions levels (based on 2018 projections).
In accounting terms to carry forward credits from Kyoto CP1 and CP2 into our 2020 to 2030 emissions budget, to meet Australia’s Paris Agreement. Despite the rest of the developed world saying this is plain wrong. In spirit and in convention.

We can summarise the Morrison government in-action and public deception as:
• Carry forward the ‘credit’ from actions to halt land clearing by the QLD State Government 30 years ago.
• Disregard International convention in counting Kyoto credits towards Paris commitments.
• Continue to dodge substantial action on fossil fuels.
• Tell the people, we will meet or beat Paris. “Paris in a Canter”.
• Easy peasy. 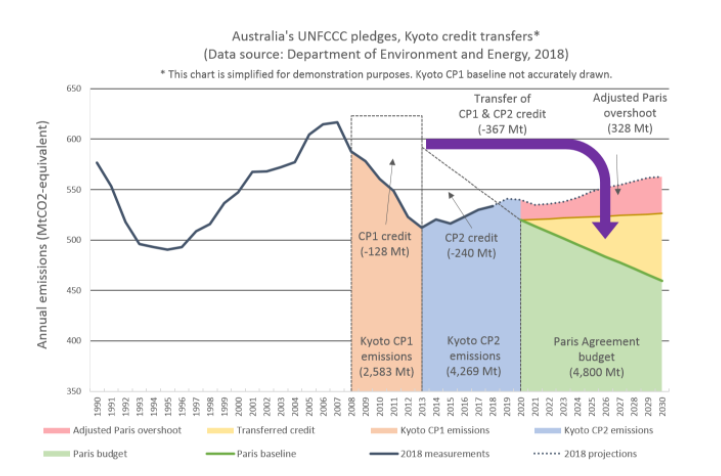 Tim Buckley is a Fellow of Melbourne Law School.

NOTE: Refer above – The CP1 + CP2 ‘over-achievement of 367 Mt’ was done by using John Howard’s ‘clever’ scope to include land-use, and by going back to 1990, and adding +8% to our pre-land clearing legislation trajectory. The Morrison Government is now rolling this credit forward into the Paris Agreement accounting, so that we can claim to ‘meet’ our Paris commitment, while doing nothing new policy-wise.

We now examine what our international obligations and legalities should be. 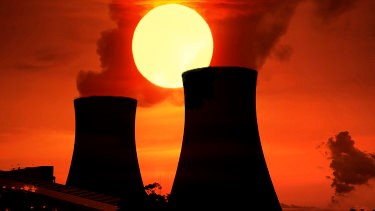 A group of lawyers is warning the federal government there is no legal provision in the Paris Agreement that enables it to use carryover credits from the Kyoto Protocol. CREDIT:NINE

“Kyoto came to an end. Paris is a completely different approach. It’s a new architecture where things start fresh,” said University of Sydney Professor of international law Tim Stephens.
The statement said there was no consensus among signatories to accept carryover credits, and “no provision in the Paris Agreement that refers to the Kyoto Protocol, nor to the units established under it”.
Dean Bialek, a former Australian diplomat who was a negotiator during the 2015 Paris Agreement, said “the government’s legal position is untenable, and further degrades Australia’s international reputation after years of inaction”.
Rodney Tiffen is Emeritus Professor of Politics at the University of Sydney. In his article, “Paris? We’ll always have Kyoto”, he sets out the complete history of Australia’s Kyoto I and II commitments, and the complete lack of precedent for carrying forward Kyoto credits to the Paris Agreement commitments. 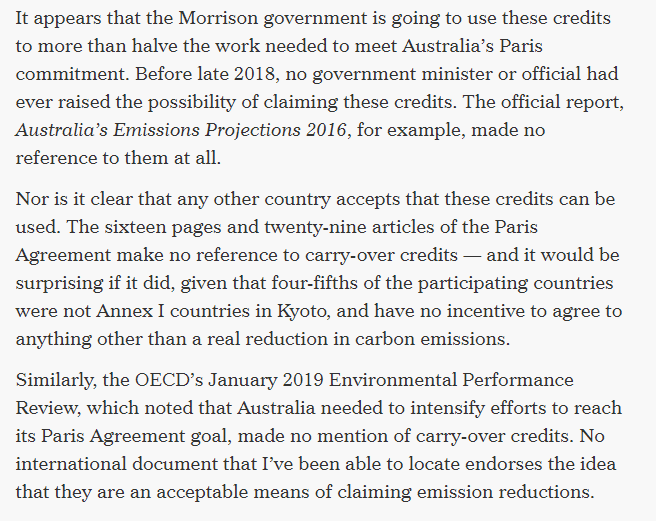 The Paris Agreement and UN is largely based on good faith and international co-operation. The Morrison Governments stance on using ‘Kyoto carry-forward credits’ emissions accounting under-mines international Global Warming action. And harms our international reputation. This will result in risks to international standing (e.g. the EU) and jeopardize our influence in the Pacific (e.g Fiji), which could include bilateral or multilateral trade deals among countries with high ambition for carbon reduction.

Australia now ranks last, globally, on climate policy according to three think tanks. The NewClimate Institute, the Climate Action Network, and Germanwatch assessed the actions of 57 nations across four (4) categories of emissions, renewable energy, energy use, and policy. The report, the 2020 Climate Change Performance Index, ranks Australia as the bottom 6 performer in all four categories, making it in aggregate the worst overall out of all 57 countries.

At a State level, and at a personal level Australians are doing a reasonable job. We are the highest per capita installer of roof-top solar pv in the world.
South Australia has shut down all coal-fired power stations and plans to reach 75% renewables by 2025 and 100% by 2030. Victoria has a target of 40% renewables by 2025.

‘Big coal’ and ‘big gas’ continue to undermine any serious discussions in Canberra about legitimately meeting our Paris Agreement targets. Much less do our share to hold global temperature to +2 degrees C or considerably less. Fossil fuel lobbying of Federal governments continues to under-mine national action to de-carbonise.
All of this has historically resulted in Federal Government providing ‘lip-service’ to serious emissions cuts. Lack of commitment is exemplified by ‘failure’ in the following:

This topic is a bit complex we know. The Morrison Government is relying on this complexity as being too hard for the average ‘punter’ to take the time to understand. But almost all NGOs agree, we ‘gamed’ the Kyoto period, and now we are planning to use the ‘carry-over’ credits to make the Paris Agreement achievable without any new policies.

Write to your local Federal MP. Ask that: