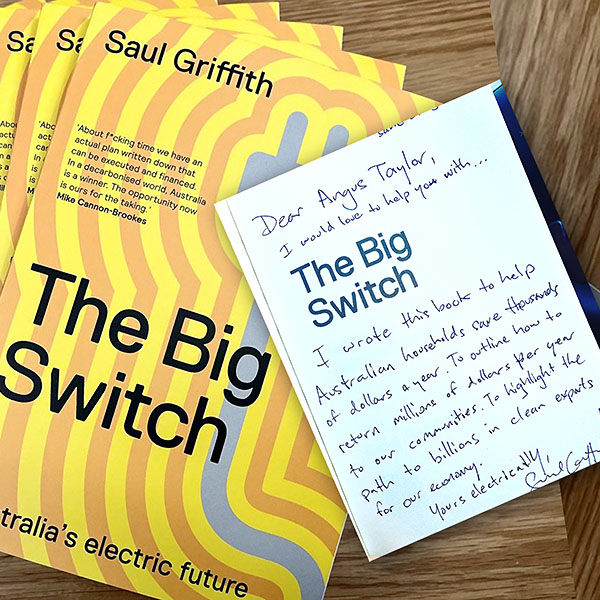 In his book, “The Big Switch- Australia’s electric future”, Saul Griffith tells us that he wrote this book because the world has a climate emergency and he, as an innovative engineer, wants passionately to help solve it. Benefits here would include lower energy costs, clean energy jobs and exports, improved health, air and water, restored nature together with indigenous expertise, and less social inequality. Plus achieving our role in inspiring and helping the world to reduce emissions by almost 75% by 2030.

“Getting to zero requires transformation. And electrification is the path” (p. 65). “If you read one chapter in this book, this is the one I’d have you read.” It is Chapter 5 “Electrify (almost) everything!” (p. 68). Griffith describes how every Australian can change their home and car to renewable-sourced electricity by having a plan spread over several years. This will soon save energy and transport costs of about $5,000 per annum. It will also be healthier and will lower emissions. Each level of government can help by offering incentives. This can be demonstrated in selected areas as pilots established throughout Australia. Australian Renewable Energy Agency (ARENA) and Clean Energy Finance Corporation (CEFC), plus lower-cost bank loans, can also help. His clever drawings help readers understand his point. In another chapter, he insists we should be wary of hydrogen because it is costly to produce in a useable form and is inefficient. But it is good for ammonia as a fertilizer for crops. 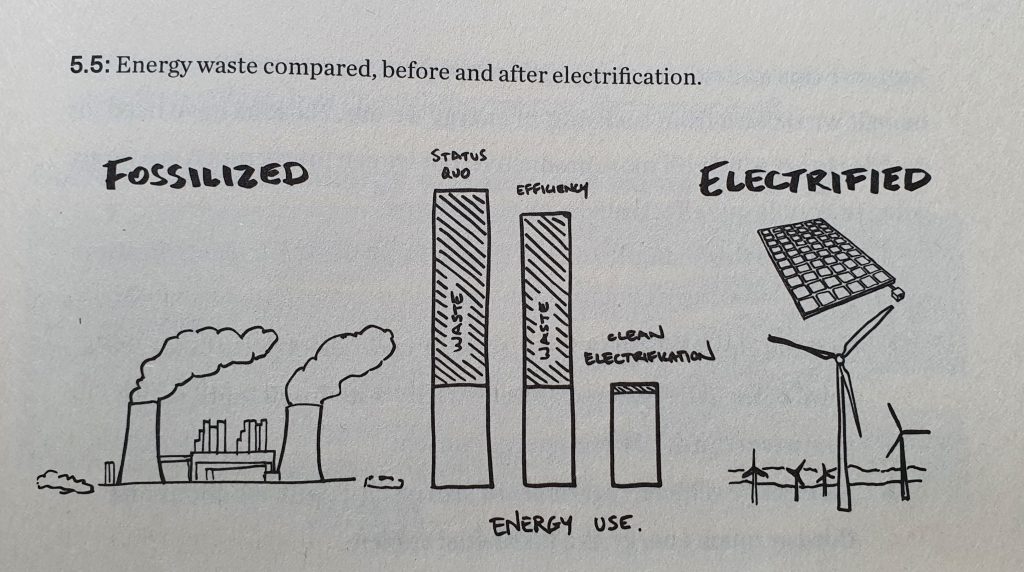 Australia as a world leader

Australia has plenty of sun and wind, is the easiest country in the world to change, and should be the leader in the clean energy economy. We need our government to set “a national electrification agenda” (p. 80). “I’m excited for Australia: if we choose to lead the world, we’ll build the world’s leading technologies and technology companies.” (p. 126). In his travels around Australia Griffith has noticed that women are better than men at leading with the changes.  As for exports, Australia has plenty of profitable non-fossil fuel minerals that the world wants, for example, gold, iron ore, bauxite, and rare minerals such as lithium.  Clean electric energy can be exported in undersea cables.

Griffith loves nature. He said, “I believe we could become better stewards of the world and our fellow creatures.” (P.164). He’s worried we are trampling nature and driving over it in increasing numbers of larger and larger pickup trucks. He believes “we might be best served with some things smaller and some things less” – that is fewer roads, fewer cars and less driving. He’d like to see us “freeing up wildlands for wild animals by changing our diet” which means eating less meat. Griffiths goes on to say, “We need time to enjoy the natural world around us – to heal it, and to heal ourselves.” (p. 166).
The next three years of the new federal government’s term are absolutely critical for decarbonising and government leadership. Griffiths puts it like this: “We may seem like the climate underdog, given the last 20 years of crappy Australian federal government climate policy, but the underdog here can come good and bring it home with a strong finish this decade, winning the climate future we all want for Jacko and for Greta, for ourselves, and for our children.” (p.171)

As an activist for the last sixteen years, I find it easy to agree with Saul Griffith. He knows so much and sees the very big picture and brings it into his writing and speaking. He explains topics clearly to everyone. His clever drawings help clarify. He has won an award as a genius. Truly he is. Australia is so lucky to have him and other climate leaders such as Mike Cannon-Brookes, and Andrew Forrest, at this globally dangerous time. Get the book, read at least Chapter 5, and vote for climate-acting MPs. We need to get going very soon with a new, wise and compassionate government.

Barbara J. Fraser gained her B.A. (psychology & social work) at the University of Melbourne. For the next twenty years, she and her husband taught in schools in England, Canada and the U.S. as well as producing their children and studying. Barbara’s graduate degrees were M.A. (counselling) at Stanford University; and Ph.D. (education & social sciences) at George Peabody College for Teachers, Nashville. In 1976 the family returned to Melbourne where she became a lecturer in the Faculty of Education, RMIT (1976-95).