Star of the South – Offshore Wind in Victoria 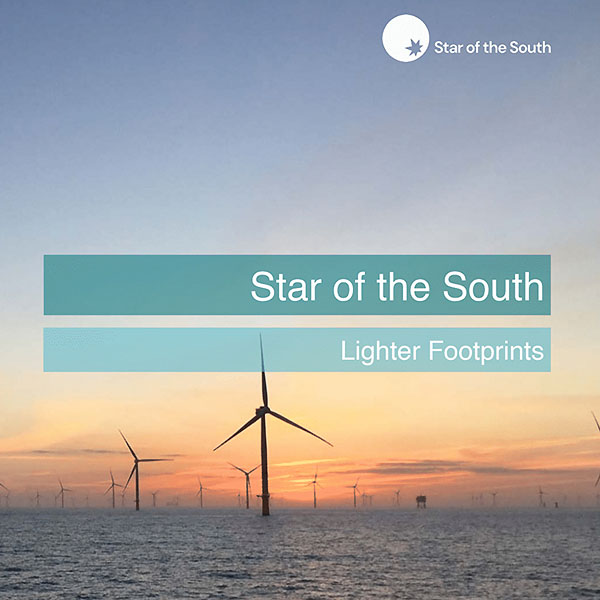 We were fortunate to have Naomi Campbell, the Development Director of Star of the South and Pat Simons, Yes2Renewables Coordinator speaking at our June 29th event on offshore wind.

Naomi Campbell – Star of the South

Naomi Campbell, Development Director for Star of the South, is our first speaker.

Naomi has over 12 years of experience in the offshore wind industry predominantly in the UK. The UK currently has almost 13GW of offshore wind in operation and 86GW in development – one of the largest international markets for offshore wind. With a background in Ocean Science and Coastal Management, Naomi has worked in diverse roles including executive leadership, development management, environmental impact assessment, and environmental monitoring. She directs the approvals and land assembly teams within the Star of the South.

Naomi started with an initial history of the Star of the South project – first mooted in 2017, then granted an exploration licence in 2019.

Star of the South Outline

Overall snapshot of the Star of the South, Australia’s first offshore wind project – Driving the future of clean energy

Naomi gave us an overview – 200 turbines located around 7km offshore at 20-40m depth, 200 turbines generating 2.2GW. Star of the South takes advantage of the existing Hazelwood 500kV transmission line. The project has landfall at Reeves Beach with transmission running parallel to the Basslink from Gifford and either connecting at Loy Yang or at Hazelwood.

Some of the advantages of offshore wind in Australia include reduced visual impact and land use problems, and a larger job creation potential than other comparable large scale renewable technologies. Now there is over 20GW offshore wind proposed in Australia, mostly in Victoria, but also off the Hunter and in WA.

Offshore wind has diversification benefits – on very hot days in Victoria you get a rush of wind from about 3pm offshore in the east of Victoria, filling in the evening peak and helping evening out Victorian generation.

The Federal Offshore Electricity Infrastructure Act was finally passed in 2021, allowing the release of the seabed. This Act allows for proponents to apply to build, operate and decommission offshore wind generation. The Victorian government announced a $40m Energy Innovaton Fund. Star of the South was successful in gaining a $43m partnership with the Star of Victoria. 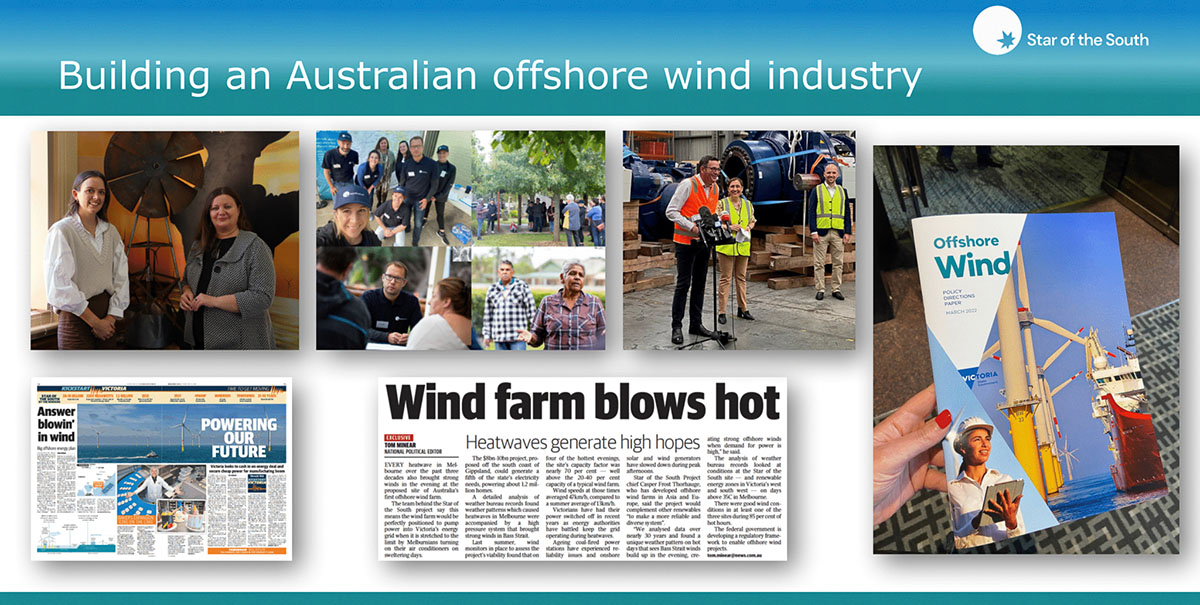 The Star of the South project has benefitted from Victorian State Government support, and exists with Federal and State regulatory frameworks and targets

Star of the South – Construction and Timeline

Naomi explained about the Star of the South construction. When built, the project will have 200 turbines fixed in the sea through the proven technology of monopiles. The power moves through sea bed cables to a substation, and then exported in a higher voltage to the shore at Reeves Beach through a buried cable. Further substations will smooth any harmonics, and the power is connected to the NEM (national electricity market) at either Loy Yang or Hazelwood.

Star of the South project components and turbines

The turbines will be around 12-18MW – around the height of the Eureka tower, and are 90% recyclable. The project will generate many specialised engineering jobs, and local supply chains. It will be serviced through one or more ports, which will need to have large storage areas.

Naomi outlined some features of the project timeline. It takes around 6-10years for planning and construction. She stated that Star of the South is still in the feasibility and development stage, on track, and working hard on the environmental approvals and getting necessary licences. Because the costs are high, between $8-10bn, the investors need a very solid foundation. 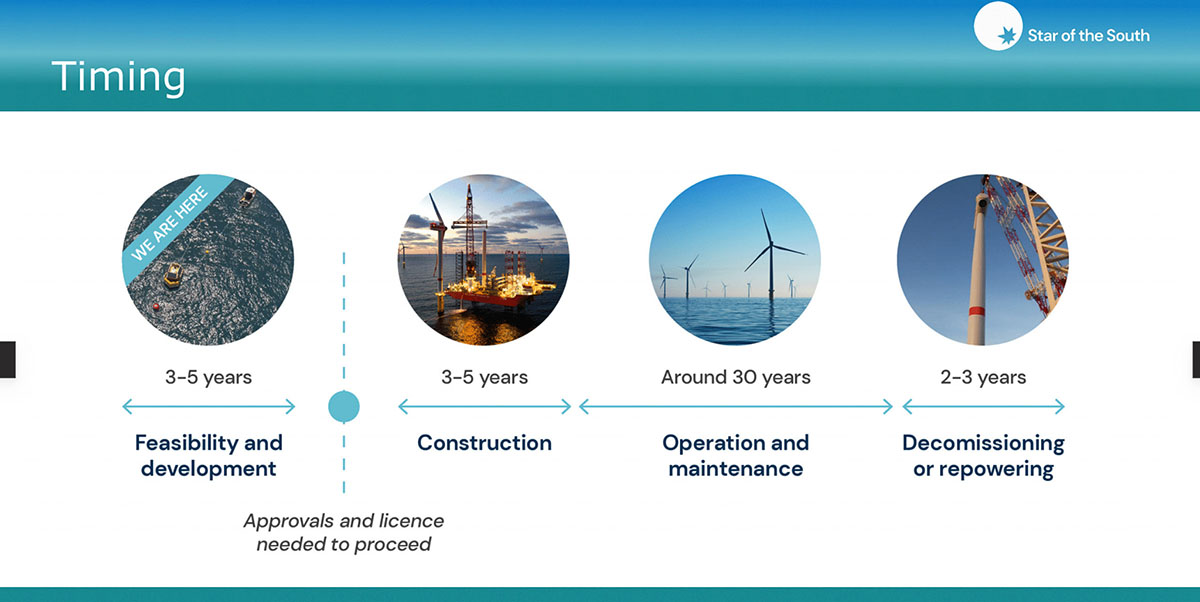 Timing of different phases of an offshore wind project

The project has done two years of marine and ecology surveys, and community and stakeholder engagement, which included a large community engagement project around three options for the landfall site and transmission corridor.

Naomi spoke about the many partnerships that underpin planning and development for Star of the South.

Star of the South has been working on planning, licences and the environment impact assessments

Star of the South, survey results- birdidentificaton and heights and seal and cormorant tagging data

Naomi continued, outlining benefits to community and business. The project will generate up to 3000 direct Australian jobs during the construction phase – a significant contribution especially in Gippsland with 760 local construction jobs and 200 ongoing jobs. Star of the South is working with local providers in terms of upskilling – businesses can register interest on the ICN portal.

Star of the South community engagement

Pat Simon on the broader picture for offshore wind

Pat Simons talked about how Star of the South is a flagship project – a game changing moment for Eastern Victoria, for large scale renewables projects. Star of the South and subsequent offshore wind projects are an incredible opportunity to benefit the Latrobe Valley, which had contributed massively to the State’s energy history, but are going through avery challenging transition with the need to create new jobs.

Offshore wind capacity will be on top of previously announced targets

Pat Simons continued about the importance of the additive nature of the new offshore wind targets. Already Victoria has some important policies like the Renewable Energy Target: 40% renewables by 2025 and 50% by 2030, plus renewable energy auctions to underpin investment in the sector. The Vic Solar Homes program aims to roll out 2.5 million homes with rooftop solar, community energy programs and the establishment of Vic Grid. Offshore wind is happening on top of what is happening onshore, taking us further than 50%.

Pat talked more about the two regions proposed for offshore wind.  Victoria’s offshore wind discussion paper sets out rolling targets to 2040, and identifies two key regions, Gippsland in the east and Portland in the west. The targets are a whole order of magnitude bigger than Yallourn. If Victoria builds 10GW of offshore wind in Gippsland that is more than the current coal-fired power stations. This industry could see Victoria exporting energy to other states, facilitating actors like the EV transition and renewable hydrogen.

The offshore wind industry will help with creating new manufacturing opportunities. If the components are built locally then our research found that this will almost treble the number of jobs.

What’s missing asked Pat – a real transition plan, with opportunities for communities, workers and industry. Darren Chester, a local National Party MP has been very supportive, so it will be interesting if this can be extended across the Victorian LNP. For instance will the Shadow Climate Minister James Newbury support offshore wind?

Pat acknowledged that building an industry from scratch will be difficult. The blades and towers are not manufactured locally, the ports would need to be developed. Can we seize the opportunities for manufacture and develop supply chains, creating resilience and well as local opportunities. What about environmental impacts and bringing communities along with us in best practice? People do really care about their backyard.

Community engagement and further opportunities for comment and involvement

Pat commented on an example of community engagement done well early in the Star of the South planning process. Star of the South put three transmission corridor alternatives before the community for extensive consultation, multi criteria analysis and comment. Some of the routes went through native forest – the community did not want to see native forests removed. This model of early engagement is important for the development of the renewables sector into the future.

Tam asked the first question on noise impacts and mitigation policies. Naomi spoke in detail about understanding the project noise, and the behaviour of affected species. Most noise is during construction for instance in making the monopiles to 40m depth. Spatial aspects of the noise need to be understood. Star of the South has collected two years of data on species normal movements and seasonal patterns – working in with Curtin University. This data, plus overseas data, is informing the underwater noise impact model, for instance looking at hammer intensities. The noise model and mitigation process will be submitted to the Dept of Environment Federally and similarly with State. Once the project is operating there is really only some noise from the large turbines. The impact assessments will be made public.

Pat Simons talked about construction planning, whale migration routes, project siting considerations. There may be points where we would have to say no, this is an unacceptable impact.

Naomi Campbell and Pat Simons answered a variety of questions on impacts on whales and birds, project siting, length and resilience

There was a question on why the project is set up for 30 years. Naomi answered that this is the lease life set by the Federal Government. Other  factors include the turbine and equipment warranties, repower options, with a good probability of extension.

On bird impacts and mitigation, Naomi noted that project siting is the most important mitigation approach, for instance avoiding particular colonies in areas like Wilsons Prom. Star of the South has been able to call on existing data but the Shy Albatross is a first species. They are looking at numerical models, eg gannets and petrel species models from Europe. There is two years of data collection, as well as historical data, plus collaboration with Monash experts. Flight height is very important. During the surveys they are able to look at the lidar data. One option is to raise the tower height, which takes the blades out of the collision zone. Bats are more impacted than birds in onshore projects. Some wind farms in Tasmania are trialling some switching off, for instance with big flocks, but that impacts generation capacity so there is a limit to how this technique can be used.

On a question on project vulnerability and storage or firming, Naomi noted that there are multiple cables in a single corridor – also 12 turbines to a string which gives some redundancy. Firming options? Not yet, but there are a variety of big batteries planned for Gippsland as well as the one in Geelong. Balancing generation with eastern projects such at Star of the South given that the majority of renewables generation is in Western Victoria will help balance the grid. Pat Simons noted that Victoria has 6 Renewable Energy Zones and that integration is a responsibility of the regulator and government.

It’s a privilege to be able to meet in person, and we are grateful that Naomi and Pat gave generously of their time