The Climate and Energy Minister, Lily D’Ambrosio, confirmed some game-changing climate policy announcements on 21st October 2022, which the current government will implement if re-elected.

The reception from NGOs and Climate Action Groups is overwhelmingly very positive.

Reactions to the Andrews Government commitments:

Jono La Nauze, CEO at EV said ‘It’s hard to overstate the importance of this moment’ and he called it a monumental shift for climate action in Victoria.

Anna Skarbek, CEO at Climateworks Centre says, ‘If implemented, this (policy) would align Victoria to the Paris goals of limiting global warming to 1.5 degrees Celsius’.

Cam Walker, CEO at Friends of the Earth called it a ‘huge announcement’ and a ‘visionary plan to reach 95% renewables by 2035’.

To briefly re-cap the highlights of those announcements:

The government also announced a target of net-zero emissions by 2045, five years ahead of Victoria’s previous commitments. 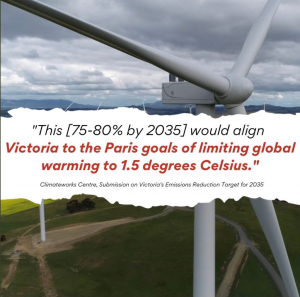 (20) Lily D’Ambrosio MP on Twitter: “Victoria is one of the first jurisdictions in the world to set a target aligned with the Paris goal of limiting warming to 1.5 degrees. We’re legislating to reduce emissions by 80% by 2035, and to bring forward our net zero target to 2045. https://t.co/C28gcfBgyn” / Twitter

Sure, there is a lot more to be done on switching off gas, ceasing native forest logging and energy efficiency, but let’s give massive credit and congratulations to those who made these recent announcements possible. This is the type of change we have all worked for years to make happen.

And truly, we’d love to see the Liberal Party match this level of ambition ahead of the election. Now there’s a challenge.

D’Ambrosio: We can’t sit around waiting for coal plants to close | RenewEconomy