The health impacts of climate change 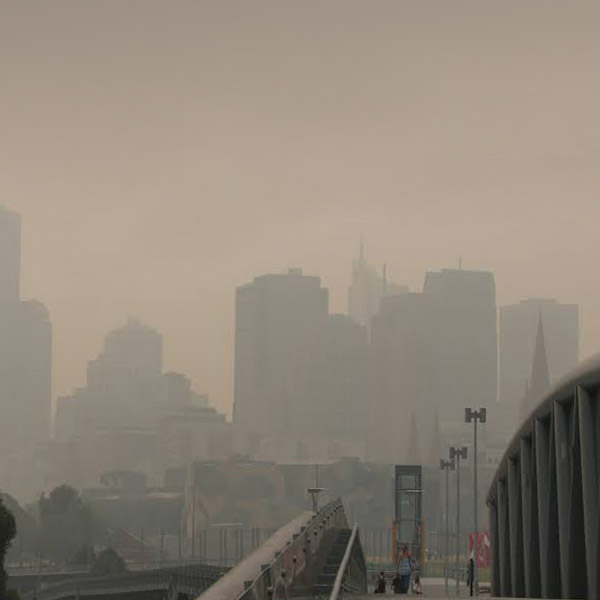 Health impacts of climate change are happening everywhere. It is happening now and is getting worse. The World Health Organisation has declared climate change to be one of the biggest threats to human health in the 21st century. We have seen conditions that threaten our health. Some of the threats are inter-related, compounding their effect. The challenge is what to do about them.

The 2019-20 bushfire season in Australia resulted in 33 deaths as a direct result of the fires; significantly more people died due to smoke exposure. Asthma from smoke caused many people to present to emergency departments and even greater numbers were admitted to hospitals for cardiovascular and respiratory conditions. Longer-term health effects of smoke inhalation are still being studied but appear to have negative impacts including increased risk of respiratory disease among children and elderly people, and adverse pregnancy outcomes including low birth weight. More nuanced health advice is needed to protect populations and individuals from exposure to bushfire smoke. The Australian National University has produced a useful guide showing how to protect yourself and others from bushfire smoke. 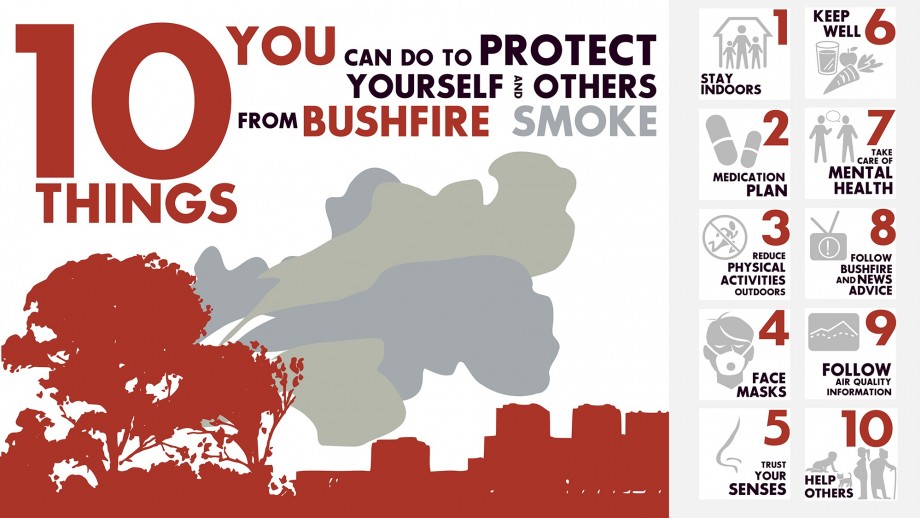 The use of gas in the home can harm children’s health. Gas cooking is estimated to be responsible for up to 12% of the incidence of childhood asthma. This is comparable to a child living with someone who smokes. Better ventilation can reduce, but not eliminate, these risks. 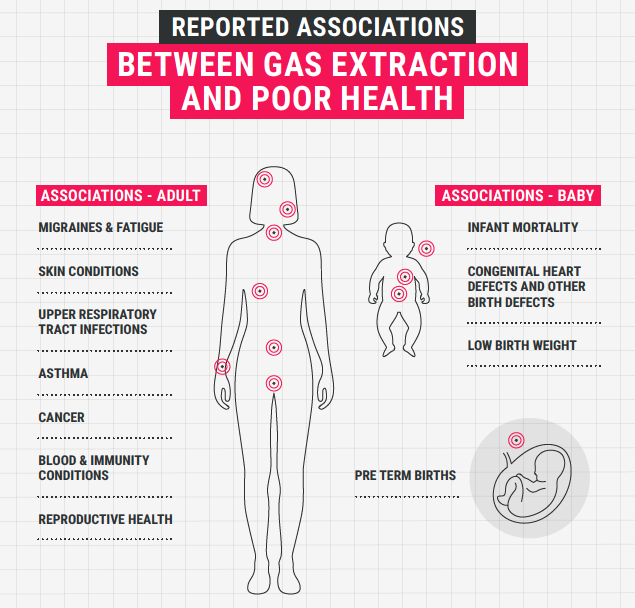 Source: Climate Council report, “Kicking the has habit: How gas is harming our health

Unconventional gas development, including fracking, is exposing Australian communities in gas extraction areas to unnecessary health risks. Extraction and processing involves hazardous substances including those that cause cancer, interfere with hormones, trigger asthma and contaminate the local environment. Studies from overseas and in Australia indicate there are also risks to reproductive health. 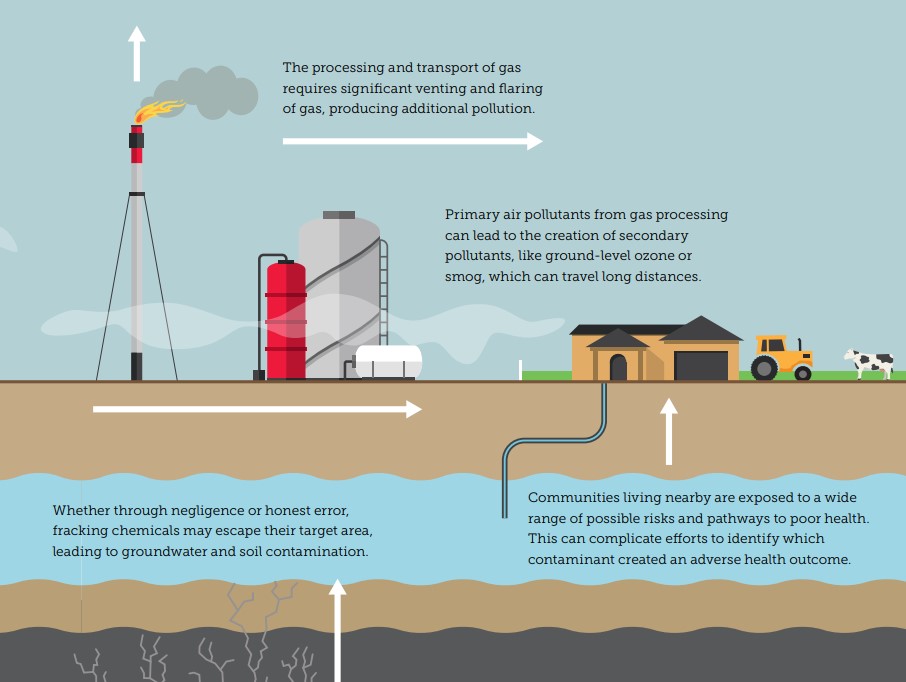 Source: Climate Council report, “Kicking the has habit: How gas is harming our health

The health benefits of closing Loy Yang A (Victoria’s largest source of harmful pollution) by 2030 has been assessed by Healthy Futures. If the coal-fired power from this plant is replaced with renewable energy, estimates indicate there would be fewer premature deaths, far fewer instances of children who present with asthma symptoms, and fewer babies born underweight.

The frequency, duration and intensity of heatwaves are increasing, and limits of human physiological tolerance to extreme heat are being reached. In Australia, the annual number of hot days is projected to increase substantially. Hotter days are expected to worsen existing inequities between rural and urban areas, and between Indigenous and non-Indigenous Australians. Heat stress affects people’s ability to work outdoors, reducing productivity and economic output. The International Labour Organisation predicts heat stress from climate change could destroy the equivalent of 80 million jobs worldwide, with construction and agriculture workers primarily affected. People living in cities will also be at risk, particularly ageing and vulnerable populations where each additional unit of warming is projected to increase heat-related mortality.

High temperatures also raise ozone levels and other pollutants in the air, which can increase the risk of cardiovascular, respiratory and renal diseases. Extreme heat and drought increase the risk of fires; bushfire/wildfires more than doubled in over half of 196 countries during the period 2016 to 2019.

Climate change is likely to cause an increase in disease transmission and pandemics. The greater the warming, the higher the health risks. Warmer weather, extreme weather events and climate-related population movement create conditions for infectious diseases and pandemics to emerge and spread. Human populations are more mobile, wildlife trade and consumption have increased, and our populations have moved into natural areas displacing wild animals and their parasites and pathogens.

For Aboriginal peoples, damage to land can magnify the loss of spiritual connection to country. Mental health is spiritually connected to cultural and land responsibilities, leading to a disruption of cultural structures. “If the land is sick, the people are sick.” Globally, Indigenous peoples have historically contributed the least to carbon emissions but are among those most affected by its consequences. Indigenous peoples have much to contribute in identifying solutions to climate change but are largely excluded from meaningful representation in dialogues and decision-making.

Young people in Australia and around the world suffer ‘eco-anxiety’: disempowerment, distress, anger and other negative emotions. It is partly caused by the feeling governments aren’t doing enough to avoid a climate catastrophe or are not being honest about the impact of actions taken. Nearly half who said they talked to others about their concerns felt they were being ignored or dismissed.

We have seen extreme weather events in Australia disrupt health services access and provision. The inequity increases for those in disadvantaged and marginalised communities.

What can be done?

Protecting people’s health from climate risk requires action within and beyond the health sector. Health adaptation efforts should reduce exposure to climate-related hazards, reduce vulnerability to hazards and strengthen health system responses to future risks. Investing in the health sector is a good climate adaptation strategy.

The AMA is calling on the Australian Government to:

Strong, fast action on climate change will save lives and reduce human suffering.

What can you do?

Estimating the Health Benefit of a 2030 closure of Loy Yang A, Healthy Futures, April 6, 2022. https://www.healthyfutures.net.au/loyyanga

Kicking the Gas Habit: How Gas is Harming our Health, Climate Council, 2021. https://www.climatecouncil.org.au/wp-content/uploads/2021/05/Kicking-the-Gas-Habit-How-Gas-is-Harming-our-Health.pdf

Tackling climate change could be the greatest global health opportunity of the 21st century. Climate and Health Alliance, April 2021. https://climateandhealthalliance.org/wp-content/uploads/2021/05/GCH-Climate-Change-paper.pdf