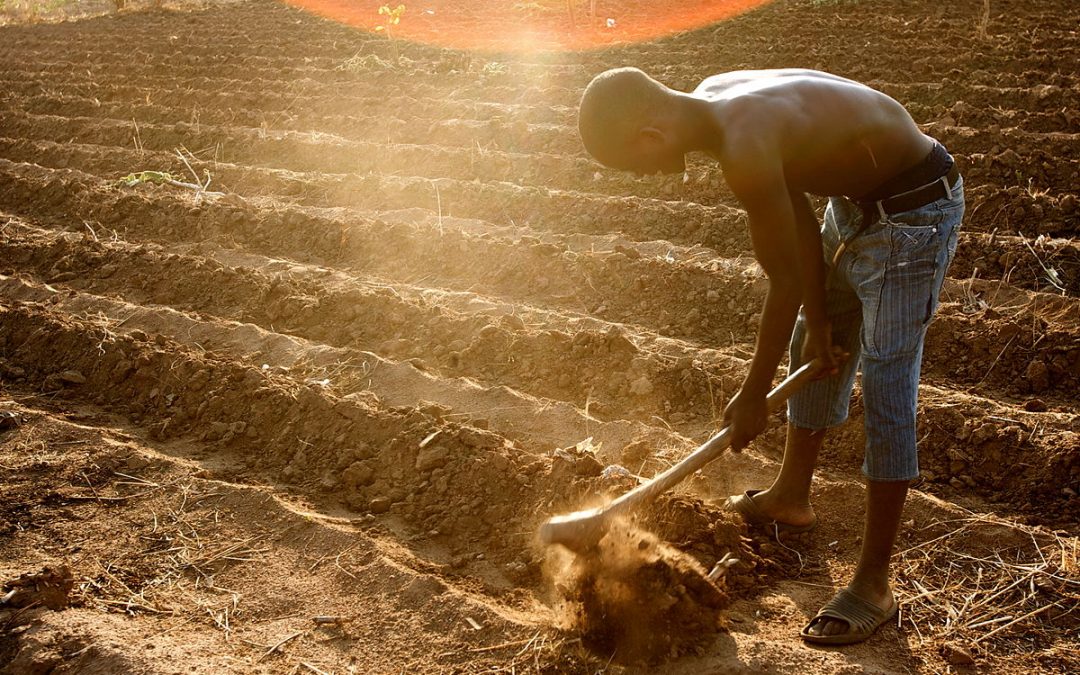 A farmer prepares his field for the planting season near Nathenje on the outskirts of Lilongwe, Malawi. Australia is using its expertise and experience to help improve food security in African countries.
Attribution: Stephen Morrison/AusAID

Food production is a complex activity

Thousands of years of human history have improved agricultural efficiency, but also created challenges in feeding and nourishing an ever-increasing world population. The impact of climate change on the food supply is being felt in Australia and around the world. The effects can be seen in many ways, but the expected outcome is the same – food shortages, lower quality food, and higher prices. Low-income consumers will be particularly at risk.

The Paris Agreement, signed by Australia and more than 190 other countries in 2016, aims to limit global warming to well below 2°C above pre-industrial levels, preferably to 1.5°C. Current warming averaging 1.1°C is already having negative impacts on food supply. Further warming which approaches 2°C will put the food supply under acute stress in many ways.

As the planet warms, weather patterns change significantly and unpredictably. Australia and other parts of the world have experienced this with extended dry spells and drought; grazing land and the animals it supports are vulnerable when soil moisture is low. We have also seen catastrophic bushfires and widespread flooding. In the mildest scenarios, growing seasons shorten and crop production decreases.  In more severe events, agricultural land is severely damaged and crops are lost. Recovery is slow, expensive and uncertain. 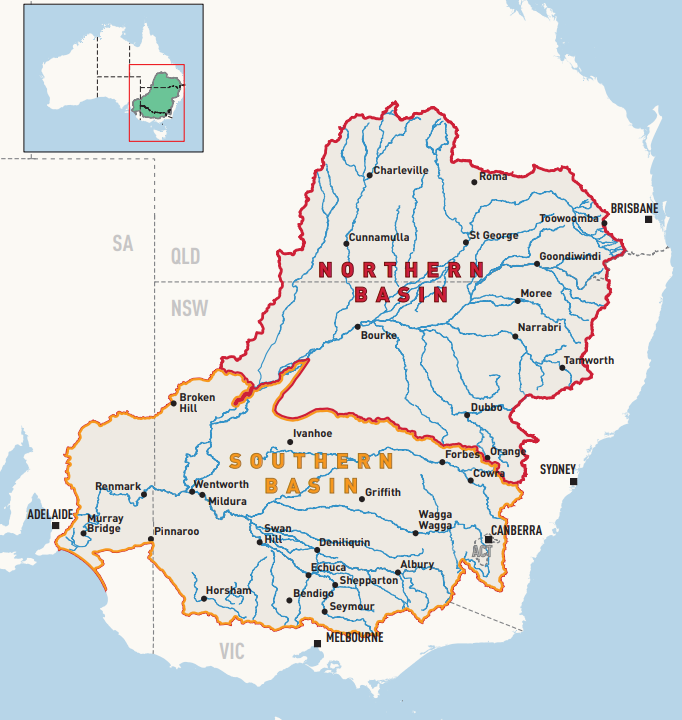 Australia’s Murray Darling Basin encompasses half of our irrigated agricultural production. In the past 20 years, water flowing into the Basin has dropped by 40%, and is predicted to fall a further 10% by 2030. The detrimental impact on crop production is substantial, along with its impact on farmers and rural communities.

The direct effect of increasing temperatures is heat stress, which affects plants, livestock and farmworkers. Significant temperature changes at a critical part of a cropping season can dramatically impact crop yield or quality. There are concerns for some crops in tropical and semi-tropical regions, where increased temperatures no longer provide appropriate growing conditions. In more temperate areas, excessive heat can speed up the development of vegetables resulting in lower production and poor quality. Some fruit orchard crops require cool overnight temperatures to set fruit; without it, crop yields will be low.

Livestock suffers heat stress just as humans do, and have fewer options for cooling themselves. The effect of excessive heat on farmworkers may impact the number of hours they work, or the time of day they work, choosing to work at cooler times of the day. 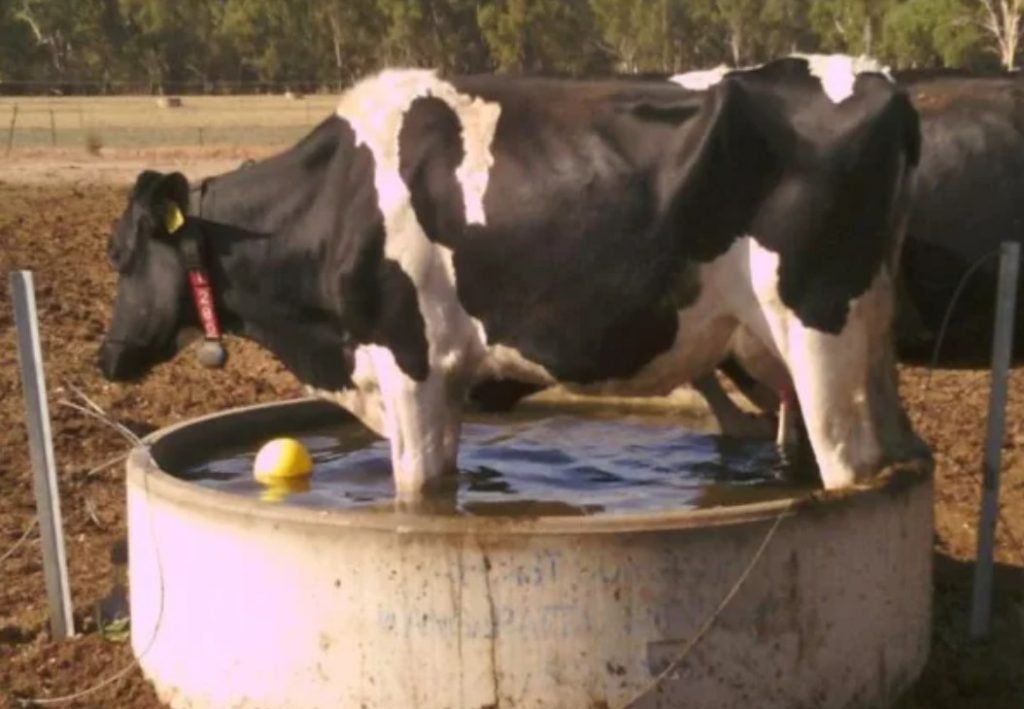 On hot days, most cows were observed spending most of the day near water bodies to cool down.
Attribution: Helping dairy cows to beat the heat, Pursuit, The University of Melbourne

Indirect effects of increasing temperatures may include changes to the expected ranges of agricultural pests and diseases, negatively affecting production of both plants and animals. Crop storage may also be vulnerable to increased pest infestation or plant diseases and spoilage with changing climate conditions.

Controlled atmosphere studies on major food crops such as grains, potato and soya beans have shown increased atmospheric CO2 can result in lower nutrient quality. Biochemical process changes in the plants result in the reallocation of nutrients within the plant; they may not go to the edible portion, thereby reducing the nutrient value of the crop.

Our modern diet has developed in such a way that only a few plant species represent a large portion of what we eat. We are over-reliant on the grass crops corn, rice and wheat, and the root species potato and cassava. If these crops should be affected by the consequences of climate change, there will be a significant impact on the food supply for many populations around the world.

Australia exports approximately 65–70% of agricultural production, which includes food, fibres (wool and cotton) and grains. Increasingly our trading partners are requesting accountability for the carbon footprint of food products through the supply chain. This trend is expected to increase; processors and exporters will need to provide more information on the carbon content of their products. This will require a full understanding of carbon accounting at all stages of the supply chain. Costs will certainly increase; as a result, Australia’s export commodities wheat, beef, dairy and sugar are projected to fall 9–10% by 2030 and 13–19% by 2050. Where low emissions alternatives are available and affordable, supply chain operators who adopt them will gain a competitive advantage.

As the climate changes and farm productivity decreases, uncertainty for farmers will increase. Insurance costs will increase, bank loans will be harder to obtain. Farmers are the backbone of rural Australia. In addition to providing our food supply, they are an important part of rural communities.

“Climate change is an issue for the (agricultural) sector right now: it has already resulted in the reduced profitability of Australian broad-acre farms by an average of 22% since 2000” (Hughes et al, 2019).

Climate impacts on the supply chain

Extreme weather events often damage road and rail transport infrastructure. In some cases, this has caused temporary food supply shortages in affected areas. Temporary alternate routes or air/sea transport can replace road and rail at additional cost to the distributor, which is passed on to the consumer.

What can be done? Adaptation and Mitigation

The World Bank and other scientific, agricultural and development organisations support farming practices that reduce the impact of climate change. These include adaptation and mitigation techniques, such as

Getting the policies right

For adaptation and mitigation to be effective throughout the food system, enabling conditions need to be created through policies, markets, institutions and governance. Australian farmers would like to see clear political guidance on where Australia is going with its climate change policies, to help farmers plan for the future with more confidence. Adaptation is not sustainable without deep cuts to emissions. The role government can play is leadership in mitigating climate change.

“Australia should be playing a leading role in advocating globally for urgent climate action, not just because we’re especially vulnerable to the hazards that climate change is amplifying… The only effective ‘forward defence’ is to reduce greenhouse gases globally, including in Australia, as quickly as possible.”

What you can do

Right now, the most important thing individuals can do is ‘vote climate’ at the upcoming election. See our #VoteClimate Action page and our Reasons to Vote Climate page for more information.

Alison Wright is active within Lighter Footprints and lives in Glen Iris. Her interests include working with interesting people, walking, travelling, gardening, reading, and many other things.