We were privileged to get a general update and some special insights into the Energy and Climate sector in Australia on 24th February from long-time friend of Lighter Footprints, Simon Holmes à Court. You can access his slides, a recording of the event via our YouTube channel, and a tweet-string with all the night’s key moments. 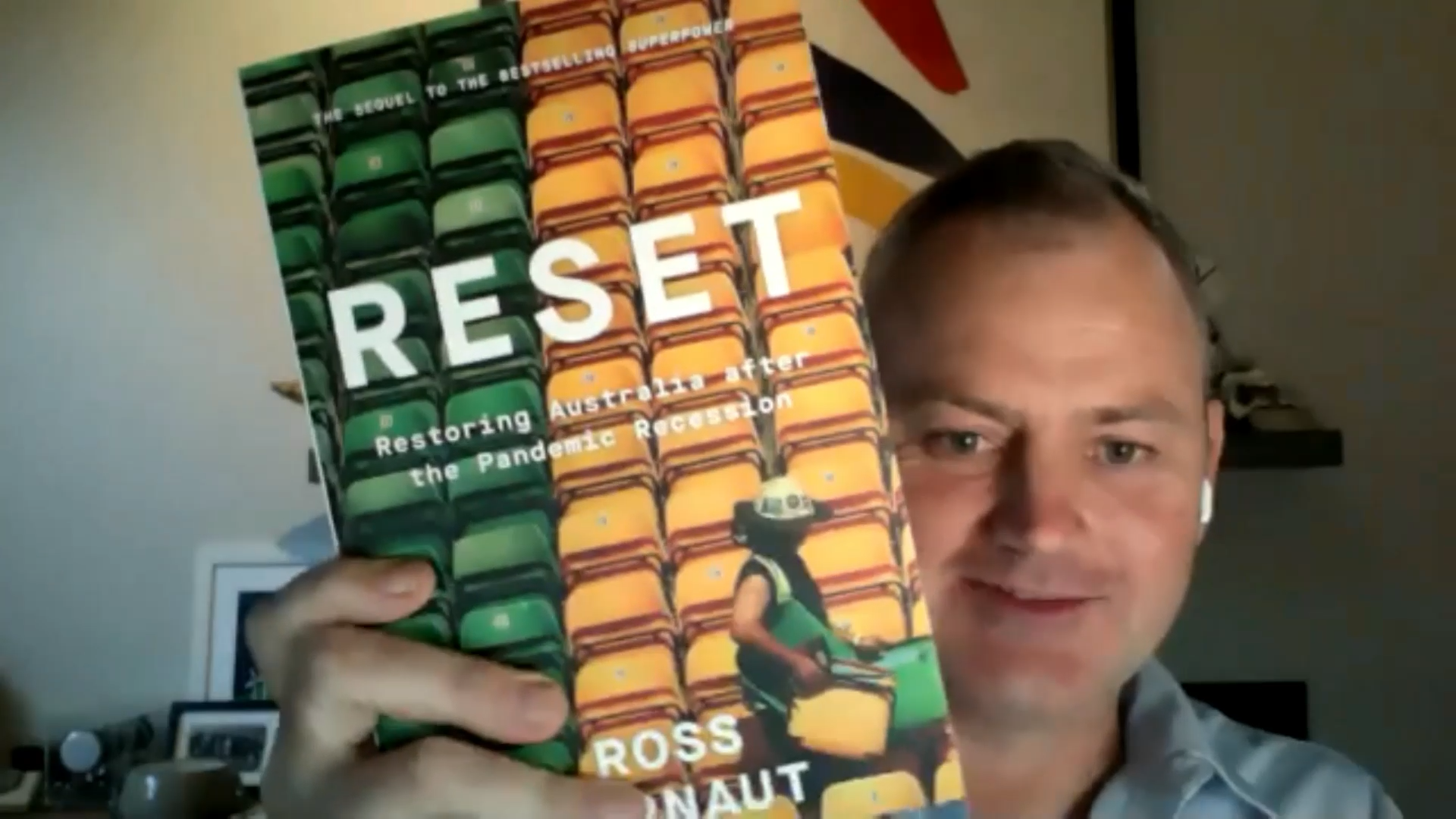 (Simon with his copy of Ross Garnaut’s new book Reset – he can’t wait to get into it!)

Simon laid out four major themes for the 150-strong online audience, as well as providing analysis of the energy transition to date, and how he thinks some key trends will play out in 2021 and beyond. 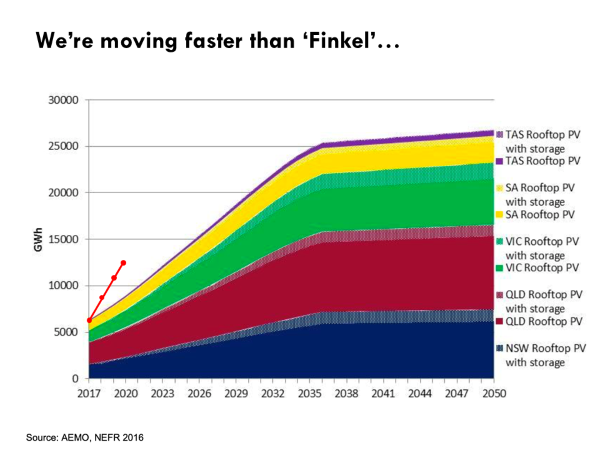 We are seeing coal generation in Australia decline emphatically and it will be at 35% of the mix by 2030.

Minimal role for gas, plummeting wholesale costs and the role of dispatchable power

Gas as a transition fuel has played a part in the early days but consumption is now shrinking. Gas generators are required, but they are required to run for less and less time. For example, Colangra Power Station ran 0.6% of the time in FY 2020. 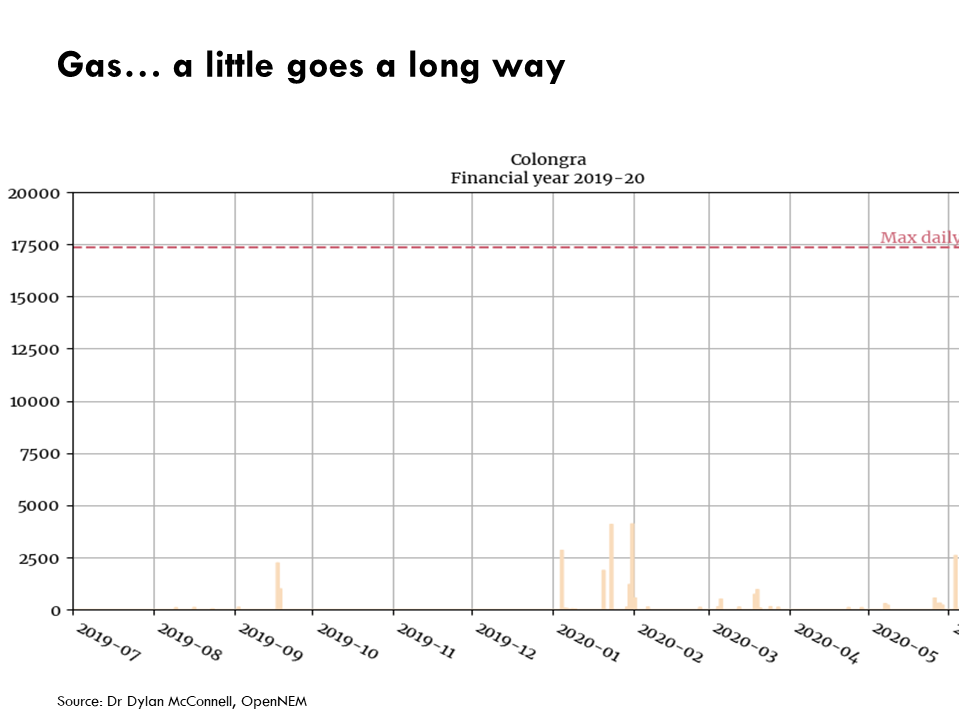 ‘Solar and wind have pushed out a lot of coal, and quite a bit of gas’. Electricity costs have fallen dramatically in the last 3 years. 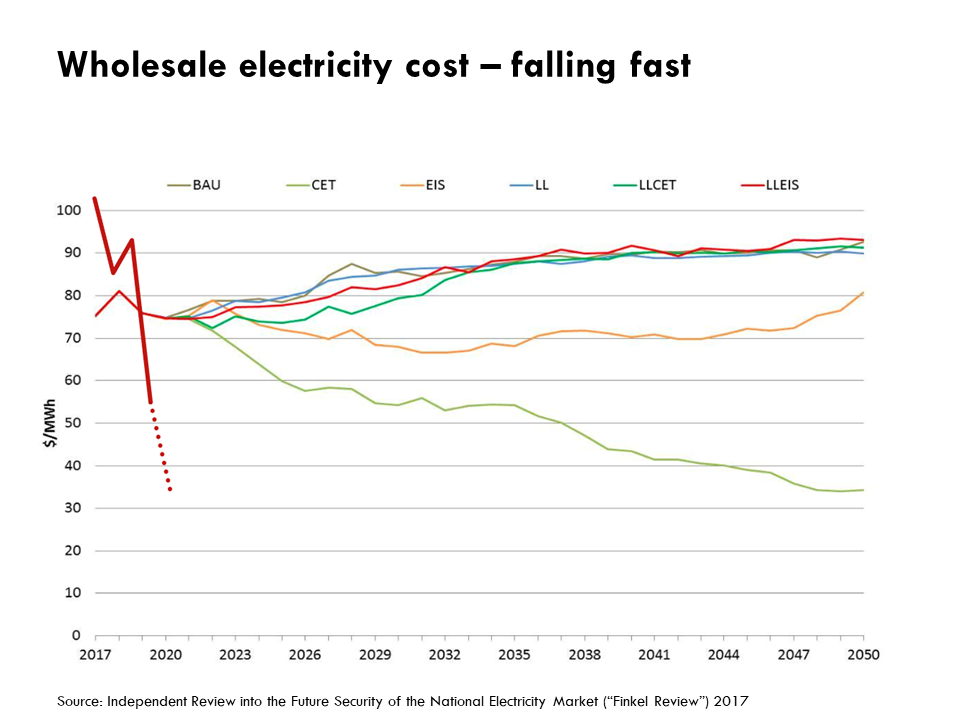 To the question, ‘how are we going to keep the lights on when the wind don’t blow and the sun don’t shine?”, Simon referenced the ISP Graph below: 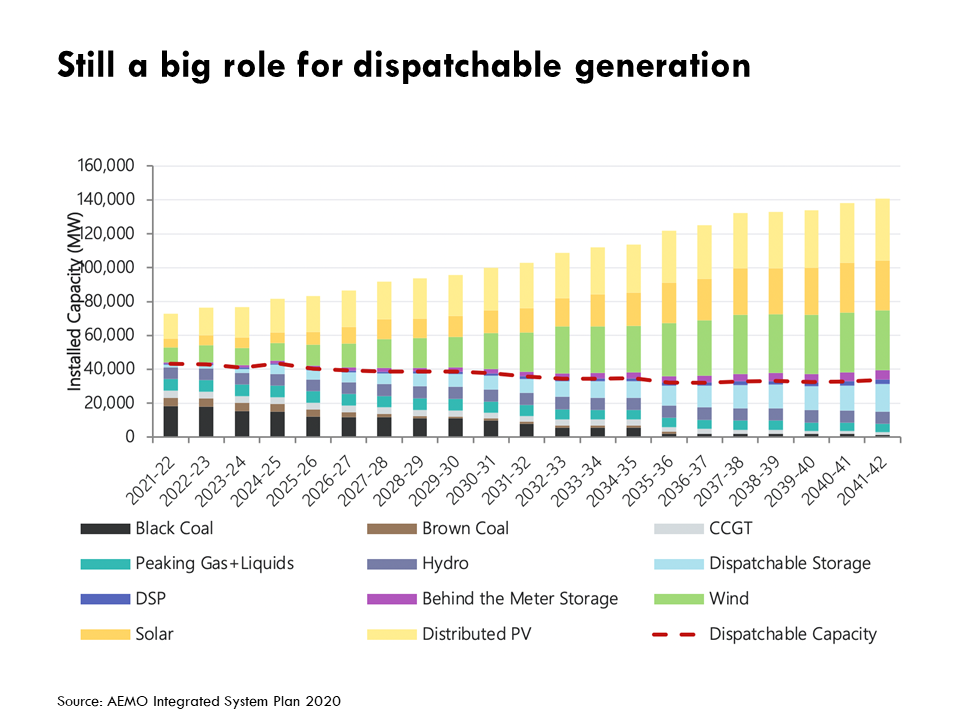 The ISP 2020 Report shows that dispatchable generation (with total shown by the red line above), is being maintained going forward at around 35 to 40 GW, while renewables grow as the main power source. i.e. dispatchable power ready to run and increasingly storage rather than coal and gas, but renewables run whenever available and displaces the fossil fuel generators for the majority of hours and minutes. 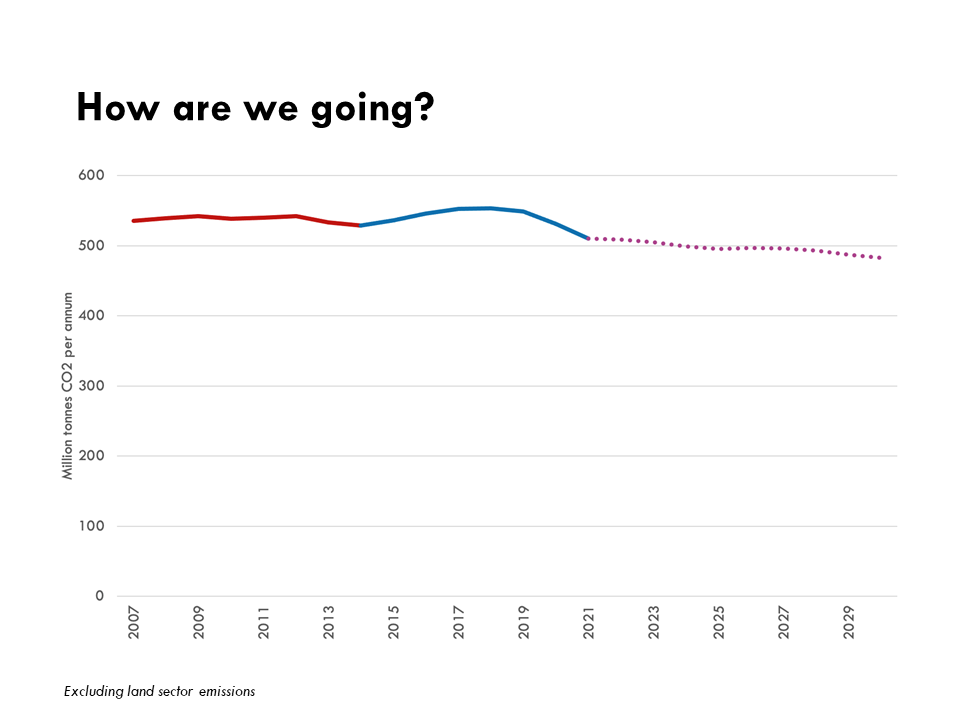 We need to electrify everything possible and deploy renewables to supply that electricity. See the graph below.  Red denotes we ‘know what to do”. Blue denotes we need to do more work to attack the particular sector. 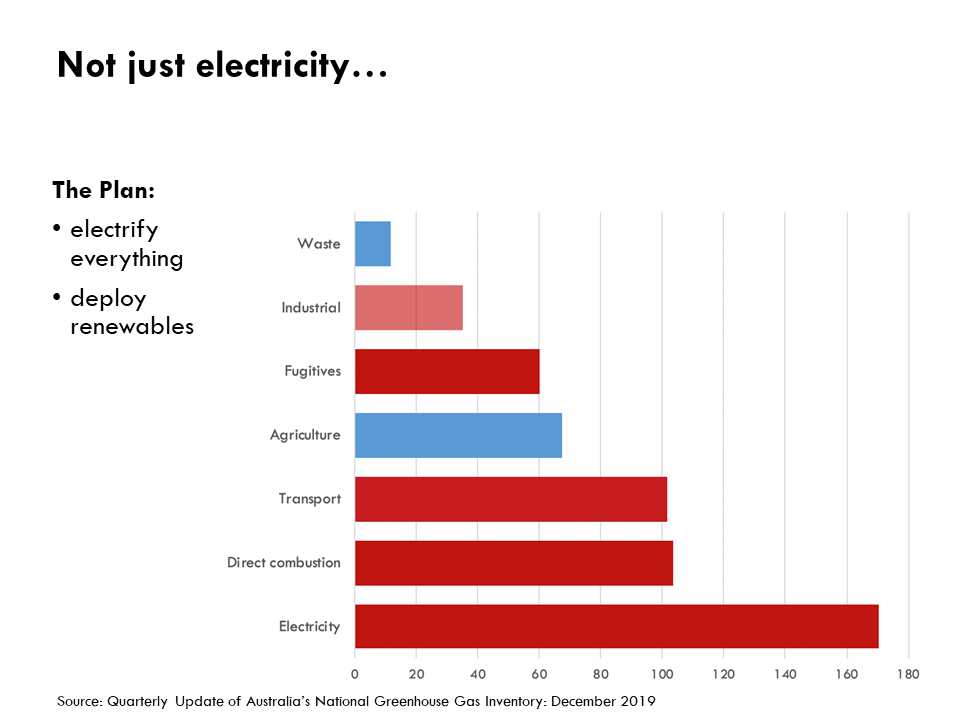 Fugitive emissions (methane) from gas and coal are still a big problem but will decline as coal declines.

We are at the tipping point already for light-vehicle fleets and high-use, kilometres-per-year car users. Simon referenced RACV calculations (Petrol Corolla vs MG electric) , showing that while EV cars are more expensive, based on buying an EV and clocking up 15,000 km per year, with re-sale at the 5 year mark, the electric MG is a cheaper fleet to run. 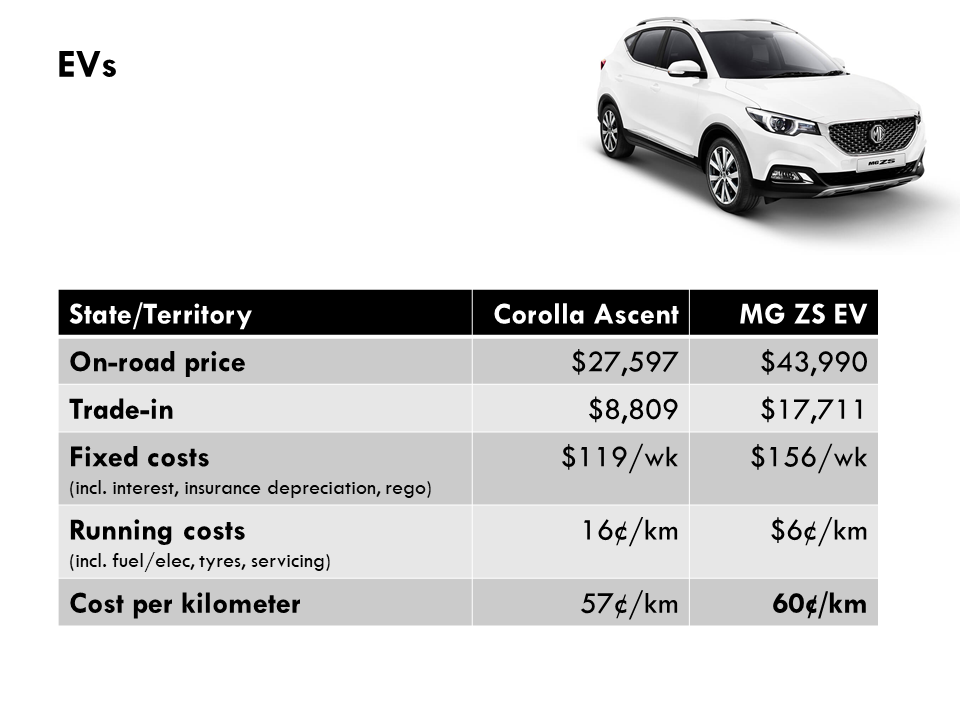 In our Terms-of-Trade, thermal coal is currently only 5.5% of our Exports.

Total employment in coal in Australia is less than the motor vehicle sector was – this means we can realistically re-train workers into green metals (steel, aluminium, nickel), renewable hydrogen for export, and major electricity export to Asia e.g. Sun-Cable from northern Australia to Singapore and/or the Asian Renewable Energy Hub (AREH) at 26 GW capacity.

Australia can build renewable energy in Australia for approximately half of the cost of the UK offshore wind projects which points to a phenomenal competitive advantage opportunity.

Simon referenced the Tables showing countries and businesses that are going net-zero by 2050. 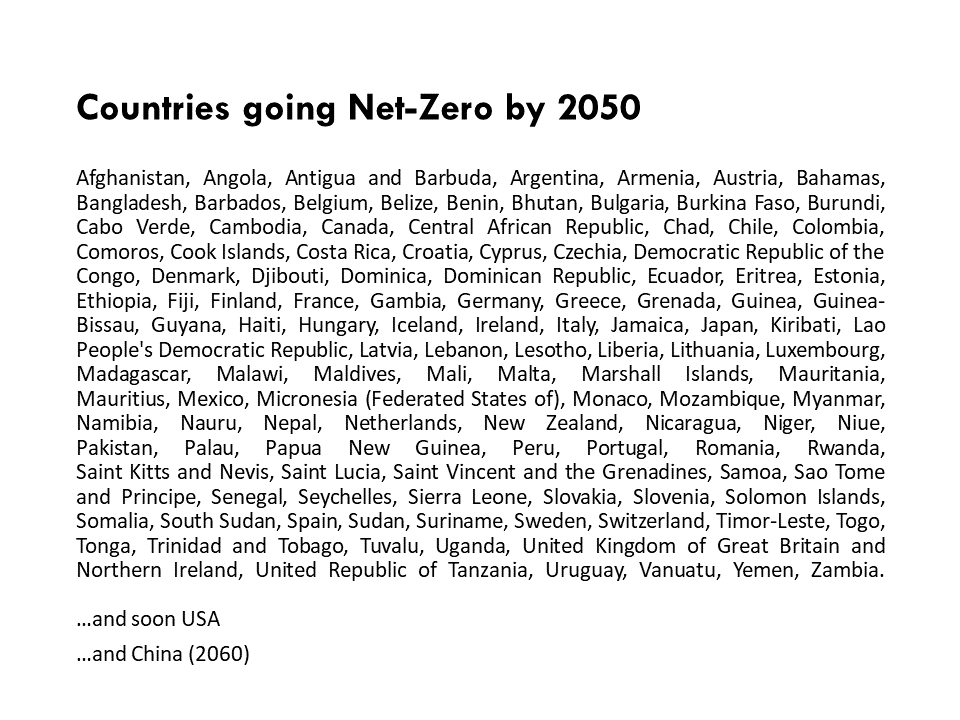 Our Australian states are going to net-zero emissions by 2050 as shown by the table below. 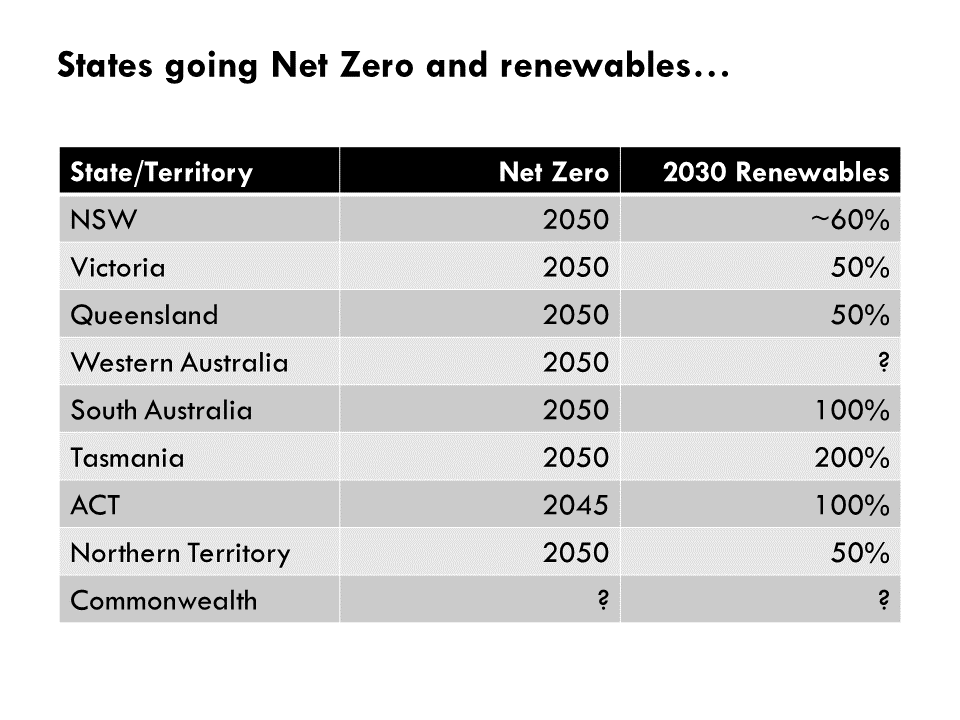 Sadly, it’s the Federal LNP that is clearly dragging its heels.

Even Poland (!) is now moving with the times. Poland has historically tried to frustrate the European climate ambitions (‘the Australia of Europe’) , but even Poland has now become committed to the necessary Climate action targets. Poland has pledged to halve emissions from coal by 2030. They have budgeted $20 billion aside to transform the workforce in the coal regions. 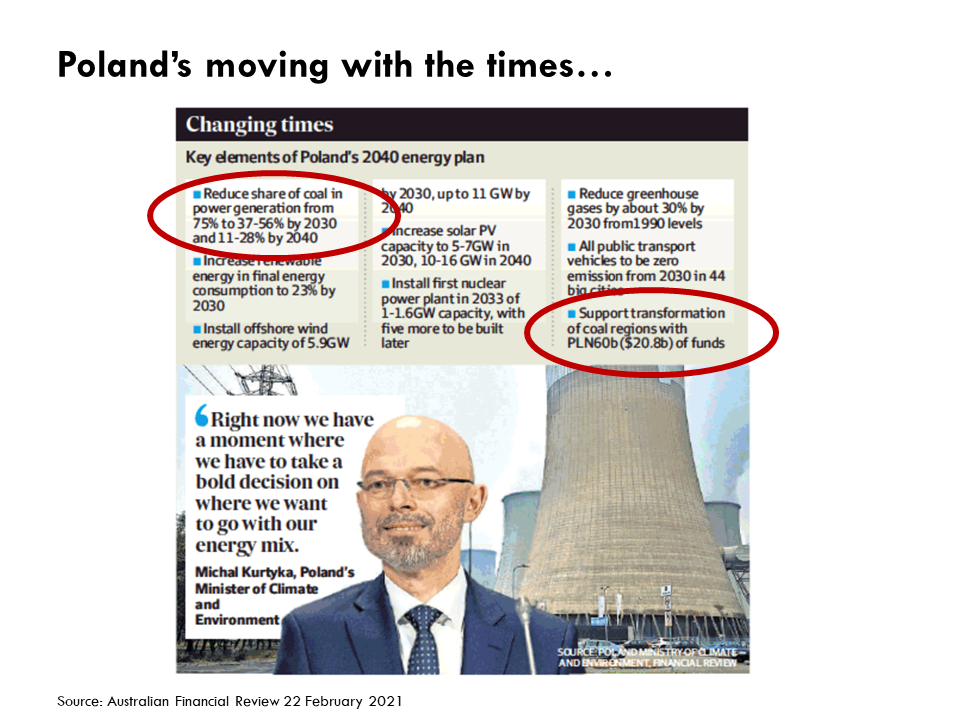 The USA is a timely reminder that elections matter, and that who is making policy matters. Joe Biden and John Kerry have already initiated four (4) critical initiatives since mid-January, a month and a half ago.

Thanks again to Simon for a terrific presentation (slides, video and a tweet-string all available). Make sure to join us next month for our March meeting – Gas-led recovery: a road to nowhere? We’re thrilled to have Bruce Mountain (Victoria Energy Policy Centre) and Tony Wood (Grattan Institute) to explore the topic of gas from a national and state perspective – don’t miss it! Register here. 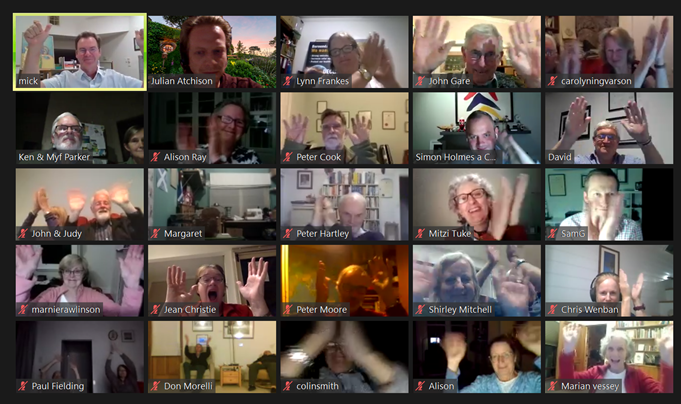