An unfolding situation with carbon markets 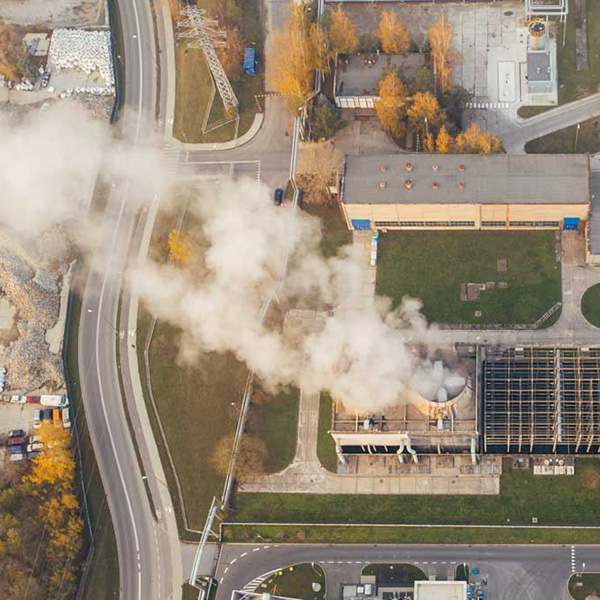 The situation with carbon markets is becoming more fluid by the day!

Welcome to this diary style blog, with updates and links to useful papers, public discussion and media responses to issues recently raised about the integrity of our carbon markets.

Lighter Footpints is also delighted to host our panel on carbon credits and carbon markets for our July meeting.

“Angus Taylor decided to effectively rip up decades-long contracts for carbon credits, gifting windfall profits of potentially billions of dollars to some private companies.” summarises Daniel Ziffer, writing for the ABC. “The documents also reveal the Clean Energy Regulator talked about creating “defensive talking points” and tweaked media messages so “we are not presuming the worst but look like this is going to be a well-managed transition””. Ziffer continues, writing that Taylor’s decision “crashed” a previously robust carbon market, “and made it cheaper for big polluters to continue business-as-usual practices rather than reduce their carbon emissions.” 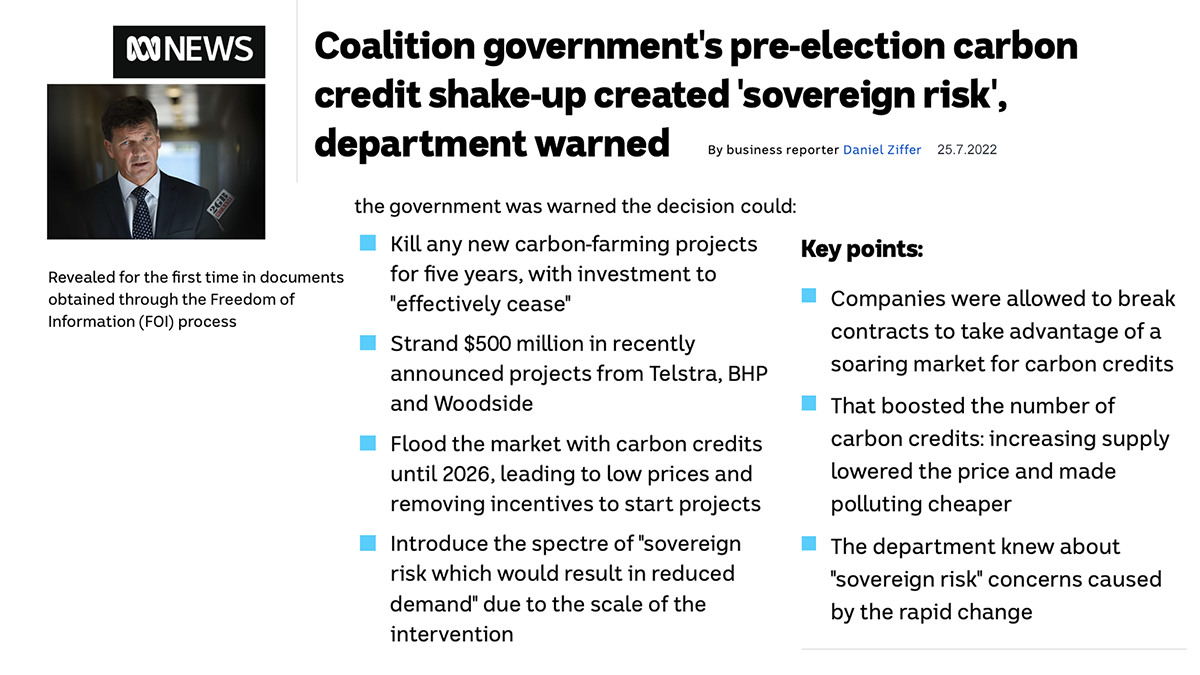 Philip Coorey writes for the AFR that Labor is arguing that “the inclusion of a safeguard mechanism in its climate change policy should be a substitute for a demand by the Greens for a moratorium on new coal and gas developments. The safeguard mechanism, which is not part of the legislation to be put to Parliament this week, will apply to the 215 entities that currently emit more than 100,000 tonnes of CO² a year.” 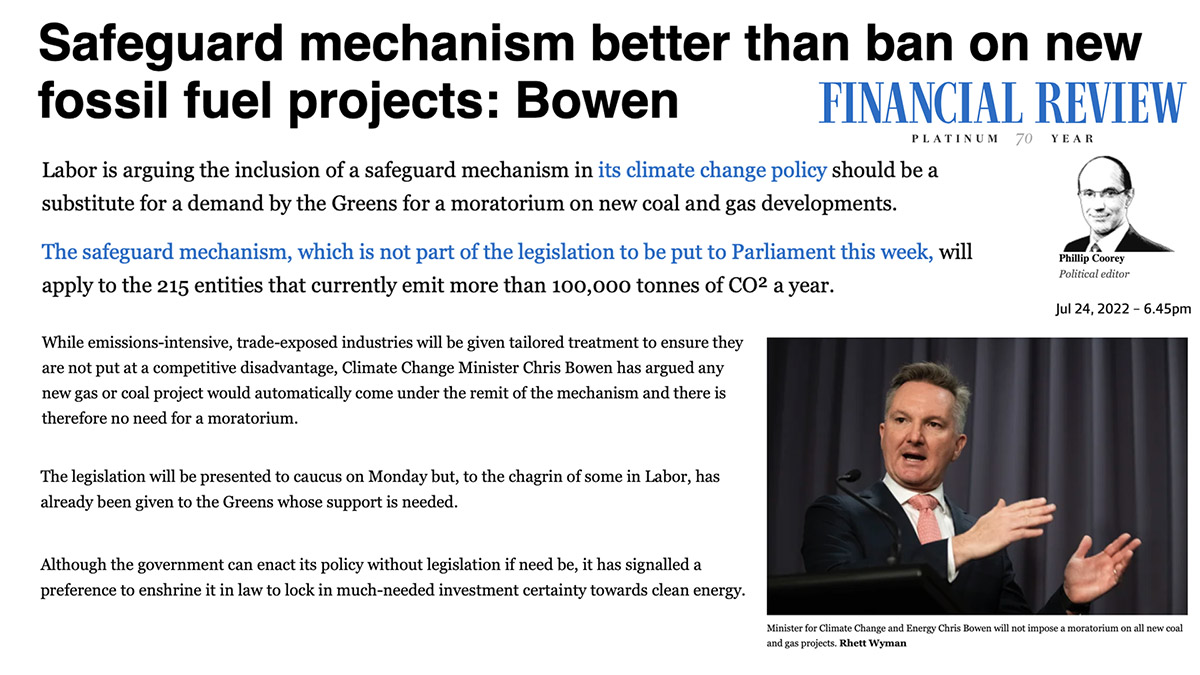 Although the ALP needs the Greens to pass its climate legislation, Chris Bowen refuses to impose a moratorium on new coal and gas projects

Writing in Renew Economy, Michael Mazengarb discusses changes in carbon price , noting analyst firm RepuTex says “it observed a significant dip in the market price for Australian Carbon Credit Units (ACCUs), falling almost 15 per cent in the wake of ongoing integrity concerns”. He says that Reputex sees “ACCU spot prices fall to around $30 per tonne, back to their pre-election levels, erasing gains observed following the election of the Albanese government. The fall comes as former chair of the Emissions Reduction Assurance Committee, professor Andrew Macintosh, doubled down on claims of “irrefutable” flaws in the environmental integrity of offsets issued under the ‘Human Induced Revegetation’ methodology.” 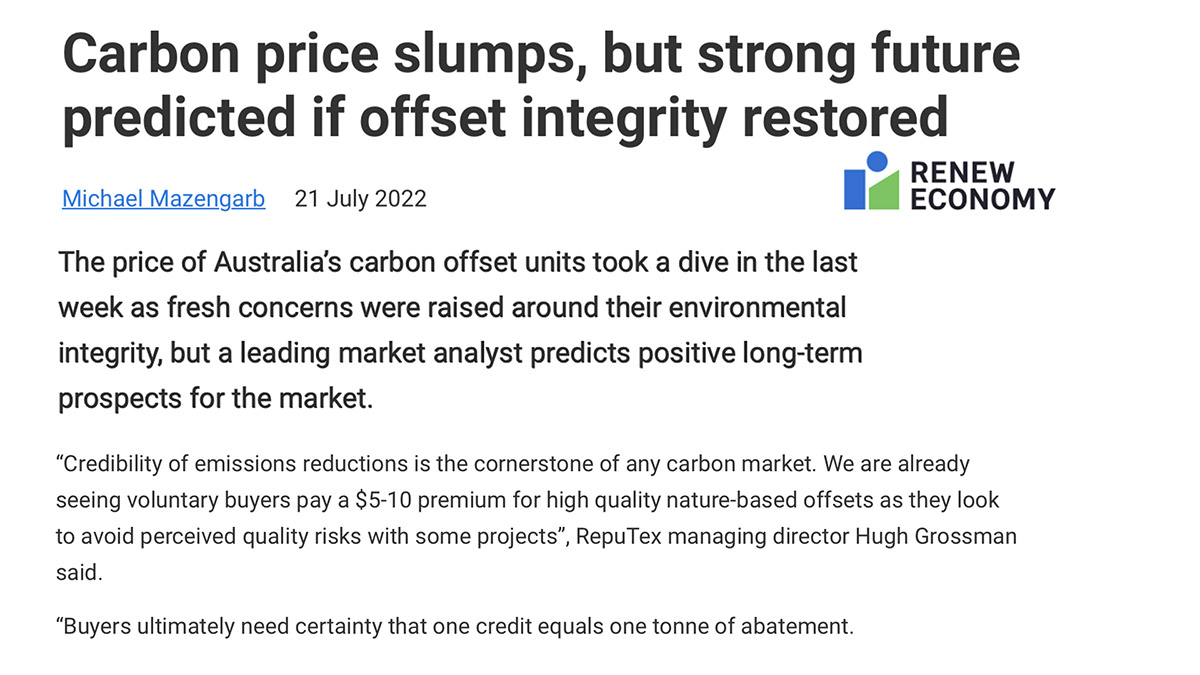 The Guardian reports that as “calls mount” for an overview of Australian carbon markets, Professor Ian Chubb, the former Chief Scientist, will head up “a thorough review”

“Chris Bowen, the climate change minister, announced on Friday that Chubb, a neuroscientist and former vice-chancellor of the Australian National University, would lead the six-month review of the scheme, after a respected whistleblower described it as a fraud and waste of taxpayer money. Carbon credits are bought by governments and businesses as an alternative to cutting carbon dioxide emissions. While their use to help meet emissions targets has significant support – particularly among polluting companies promising to offset their impact on the planet – critics have raised concern about whether credits issued in Australia represent real emissions cuts beyond what would have happened anyway.” 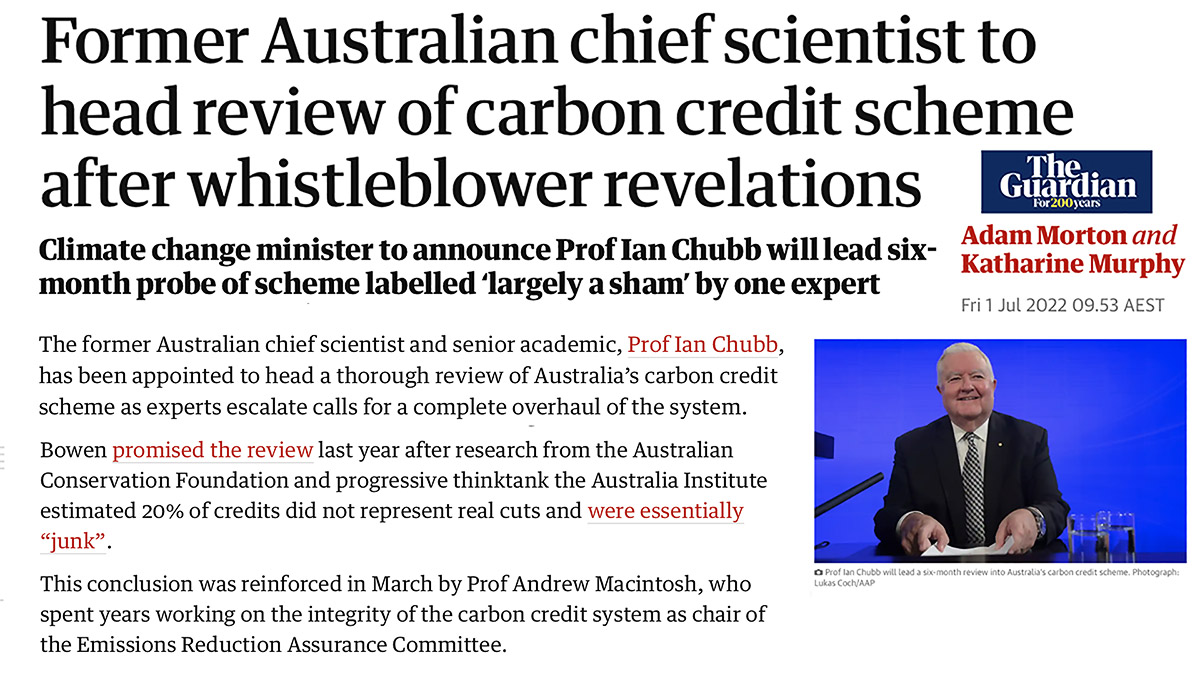 Chris Bowen promised an independent four person review panel to advise on carbon credits, including potenital, and would include “governance arrangements and legislative requirements”

ANU releases research on problems in the calculation of carbon offsets and credits from allowing forests to regenarate. In short, measurements are used for more mature areas that have been derived from growth starting with less mature areas.

“There are two issues with what is occurring: (a) it is leading to over-crediting (carbon credits are being issued for sequestration that has not occurred and, in most cases, will never occur); and (b) it is unlawful because the method requires mature trees and shrubs to be excluded from credited sites.”

ANU releases research on the additionally problem in Australia’s carbon markets. “Our analysis suggests most of the credits issued under this method are not backed by real and additional carbon storage.”

“Offset projects involving the regeneration of native forests in previously cleared areas [HIR] are both legitimate and desirable. However, the vast majority of HIR projects are not doing this. Almost all of the current HIR projects are located in semi-arid and arid areas (less than 350 mm average annual rainfall) that have never been comprehensively cleared, meaning proponents are trying to regenerate native forests in remnant native vegetation solely by reducing grazing pressure.”

“For this to make any sense, grazing would need to be responsible for dramatically reducing the prevalence of trees and shrubs in the rangelands and it would have to be possible to regenerate these ‘lost forests’ by reducing grazing pressure. Neither of these are true.”

In other words grading doesn’t really suppress forest mass growth, so paying for grazing suppression is paying for growth that would occur anyway.

The paper argainst the regulators methodology. “Rather than supporting their position, the graph shows precisely what we have been arguing: where trees are actually growing in the carbon estimation areas, they would have grown anyway because rainfall, not grazing, is the primary determinant of the prevalence of trees and shrubs in uncleared rangeland areas.”

“The graph also confirms that proponents seem to have gotten away with claiming credits while forest regeneration has not been occurring. Forest cover has been flat while the credits kept coming.”

The Guardian reports that Minister Chris Bowen said that “he believed the concerns raised by Macintosh were “substantial and real” and he took them “very seriously”, and that he would announce a “sweeping review”. “The review into credits follows the former head of the government’s Emissions Reduction Assurance Committee, Prof Andrew Macintosh, going public with his concerns earlier this year.”

“Macintosh said the growing carbon market overseen by the then Morrison government and the Clean Energy Regulator was “largely a sham” as most of the carbon credits approved did not represent real or new cuts in greenhouse gas emissions.”

Given the use of credits will be central in Labor’s policies to achieve its proposed 43% cut in emissions by 2030, the minister said an independent review headed by credible experts was required to ensure confidence in the system. 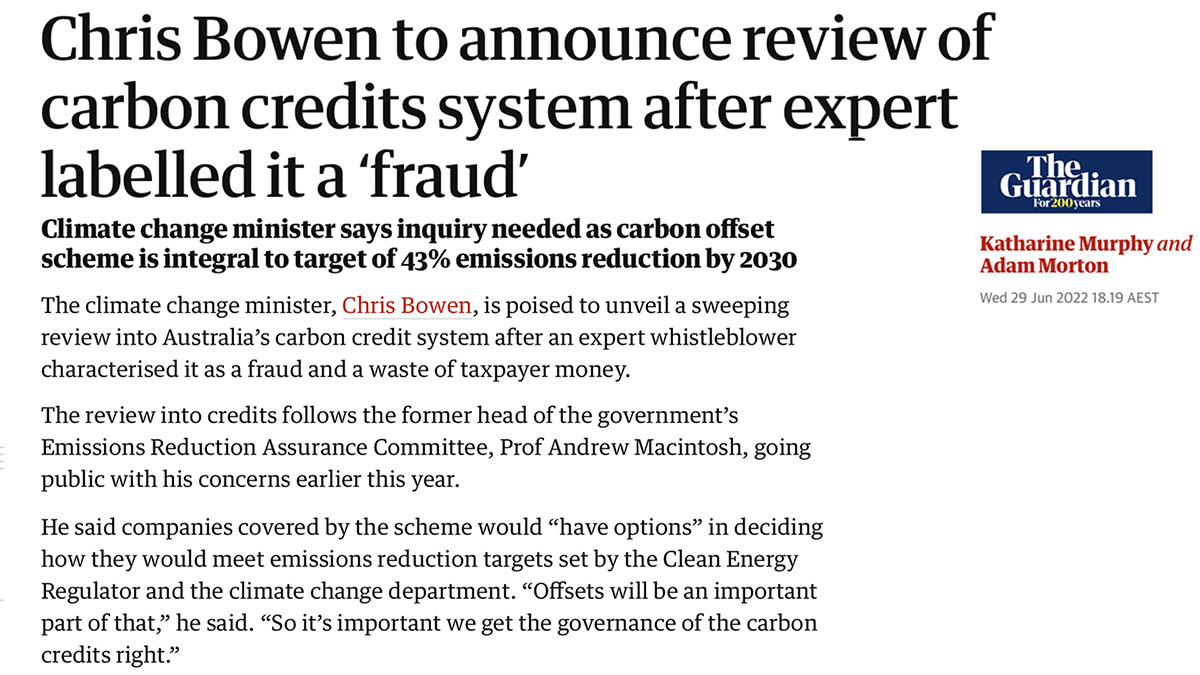 The Guardian sounds the alarm about carbon markets, reporting on four academic papers published by Professor Andrew Macintosh. “Prof Andrew Macintosh says the system, which gives credits for projects such as regrowing native forests after clearing, is ‘a fraud’ on the environment, taxpayers and consumers.” 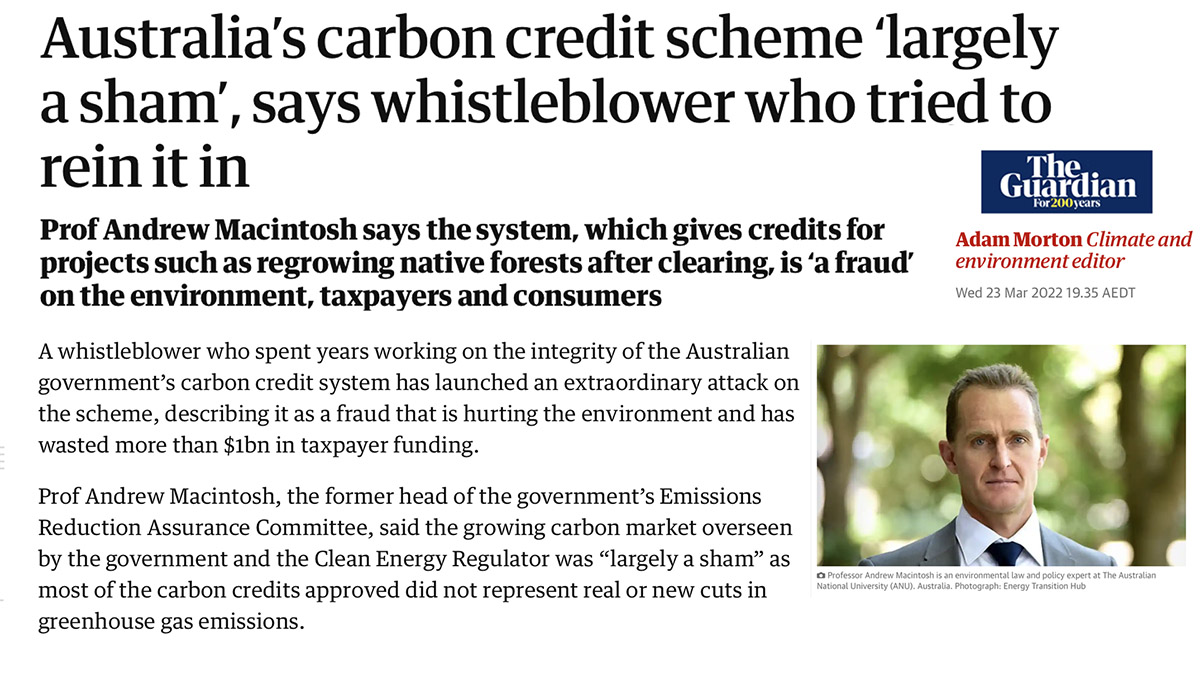 Professor Macintosh said all major methods approved by the government to create carbon credits had “serious integrity issues, either in their design or the way they are being administered”

Professor Macintosh writes “Earlier this year, we went public with details of serious integrity issues with the ERF, labelling it ‘environmental and taxpayer fraud’. While a number of long-held concerns with the scheme exist, we have initially focused on the ERF’s most popular carbon credit methods: human-induced regeneration (HIR); avoided deforestation; and landfill gas. Our analysis suggests up to 80% of the carbon credits issued to projects under these methods lack integrity. That is, they do not represent real (emissions have not been reduced) or additional (the reduction would have happened anyway) abatement.”

What can be done? Carbon markets are important to reducing emissions and the transition to a clean economy. They are not without risks, and will not be perfect. What is needed is a culture of transparency and acceptance of critique.

“This has not happened with the ERF. Methods have been developed for activities where it is extremely difficult to develop reliable baselines, hard to measure the emissions and removals, and near impossible to isolate the effects of management activities on the timescales that are necessary to make projects viable.”

“The complex nature of offset methods, and the high risk of error, means that integrity can only be maintained with a culture of transparency, where administrators expect and actively seek out errors, and move quickly to correct them when they are found. To facilitate and encourage this, there needs to be rules that force the disclosure of information, guarantee disinterested third parties the right to be involved in rule making, give anybody the right to seek judicial review of administrative decisions, and require proponents to move off methods (and onto new ones) where they are found to contain material errors.”