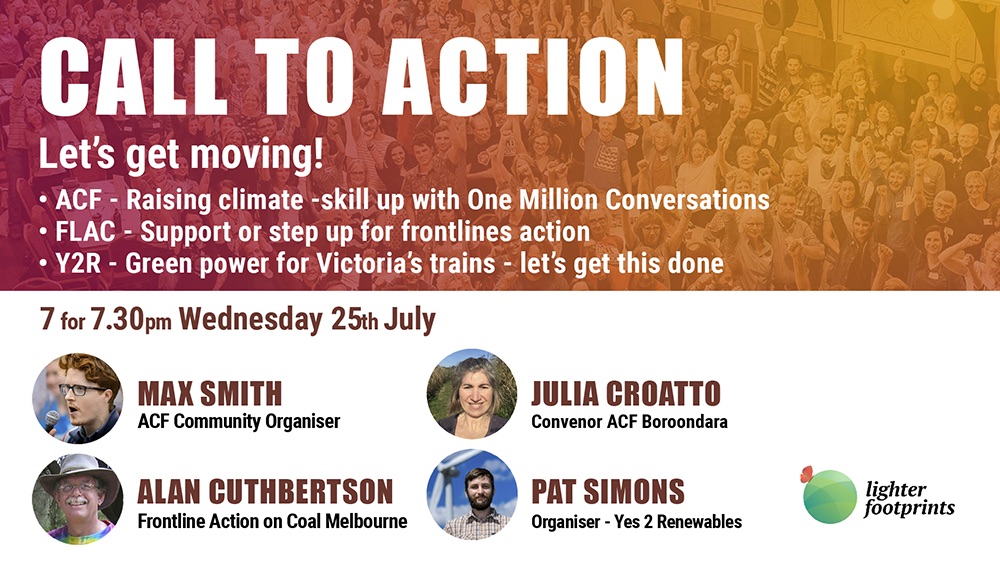 Julia Croatto is the convenor of ACF Boroondara. In her own words: I have been a longtime ACF supporter but only became more active at last year’s Convergence event (in September).  At that weekend event we were grouped regionally and I found myself with several people from the Boroondara area.  We agreed to form a new local ACF group, called ACF Boroondara, and I put my hand up to be the convenor.  Since then I’ve been involved in various community events, together with StopAdani Kooyong and the Kooyong Climate Change Alliance, focussed mainly on stopping the Adani coalmine.   Prior to this voluntary role I worked as a speech pathologist in various hospital and community health clinics, in urban, rural and remote settings.

Pat Simons is Friends of the Earth Melbourne’s Yes 2 Renewables Coordinator. Pat is passionate about bringing social and environmental justice together, and working alongside workers, farmers & community activists to make Australia a leader on renewable energy.  After the success of Yes2Renewables’ long-running campaign to secure the Victorian Renewable Energy Target, the collective is now turning their attention to making Melbourne’s trains the first in the country to be  powered by renewable energy.

Alan Cutherbertson is a retired computer programmer who now works part time selling double glazing. He has spent the last 10 years fighting climate change and the last two years trying to stop the Adani Coal mine. 9 months ago he visited the Front Line Action On Coal site in Qld and was one of 15 demonstrators charged with trespass on an Adani railway work site. He is now one of the coordinators for FLAC in Melbourne

Max Smith is a community organiser at ACF. Max recruits, trains and supports ACF volunteers to form local action groups and run effective campaigns together on the issues we care about. In this role, Max has helped build an active network of more than 22 local ACF community groups in Victoria, with dozens more growing nationwide. Over the last 7 years, Max has worked on environmental justice campaigns across Australia; from the successful campaign to replace two coal-burning power plants with the world’s biggest solar thermal plant in Port August South Australia; to stopping coal port expansion along the Great Barrier Reef on Queensland’s Capricorn Coast, to ending fracking and unconventional gas expansion in Victoria and NSW, and now Stop Adani. He represented the Australian youth climate movement in UN climate negotiations in Doha in 2012. Max is a graduate of the Change Agency’s Community Organising Fellowship and a holds post-graduate qualification in community advocacy!