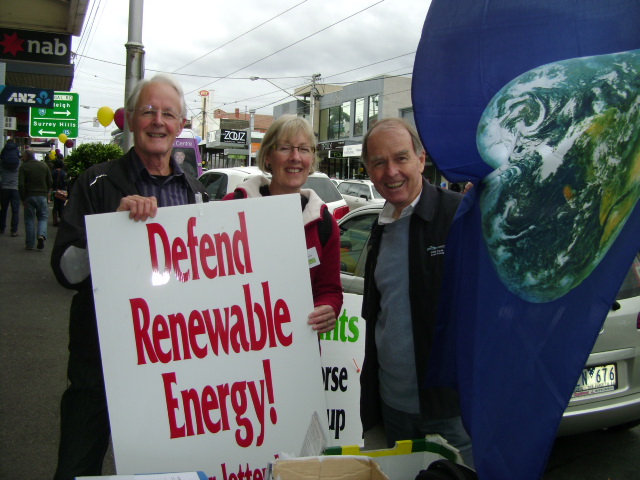 Lighter Footprint volunteers collected a large swag of letters defending renewable energy at the Burwood Festival on Sunday 5 May.

Concerned members of the public signed letters to Shadow Energy Minister Ian Macfarlane strongly protesting the Federal Coalition’s decision to review the Renewable Energy Target within six months of taking office – should it be elected to power in September.

The promise of an unnecessary review comes hot on the heels of the Climate Change Authority’s recent review which recommended endorsing the current target to promote investor confidence.

The existing target ensures renewable energy would gradually increase to  41,000 gigawatt hours in 2020.

The Coalition move has prompted widespread fears that the target is likely to be weakened in response to strong lobbying from the powerful energy retailers whose profits largely derive from coal and gas.

As the planet hurtles towards four to six degrees of global warming this century, it seems entirely prudent to strengthen the target and sheer folly to weaken it.

The International Monetary Fund, the World Bank and the International Energy Agency are among the conservative international agencies calling on all governments to scrap fossil fuel subsidies in the desperate race against time to halt  catastrophic climate change.