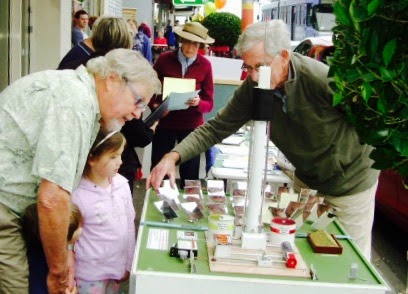 Sunny weather brought families and local citizens to the Burwood Village festival on Saturday 2 May and to our Lighter Footprints stall where they inspected our solar thermal power plant model. 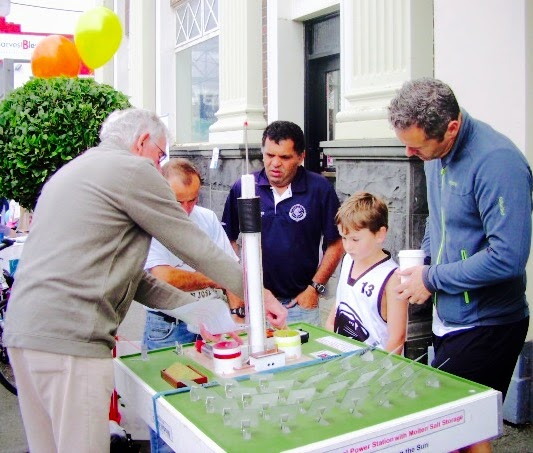 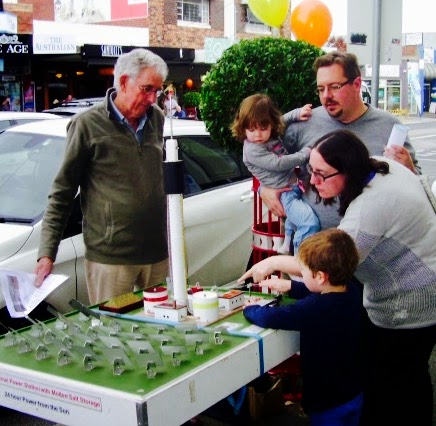 They also signed letters in droves  to Prime Minister Tony Abbott and Kooyong federal MP Josh Frydenberg demanding a swift resolution to the disastrous impasse over the renewable energy target and asking for strong targets for emissions cuts to take to the talks in Paris later this year where a new global climate treaty will be negotiated. 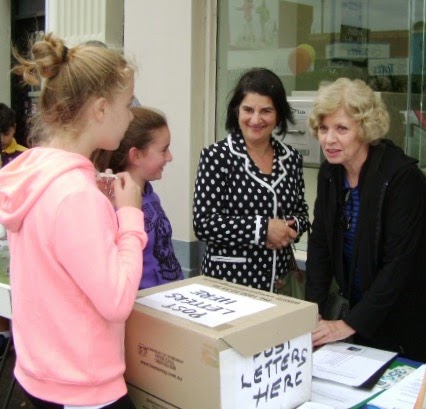 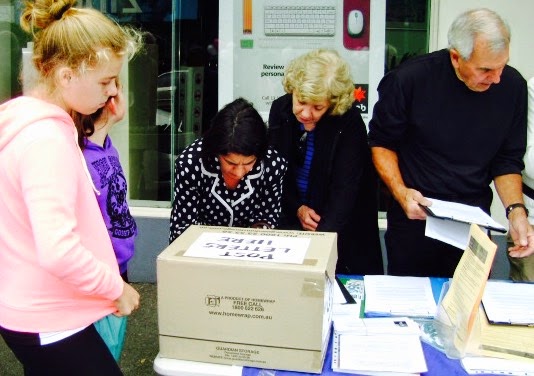 The Abbott Government has persisted with its attempts to drastically cut the renewable energy target of 41,000 gigawatt hours of clean energy by 2020 (about 26 per cent), causing new investment to stall and hundreds of jobs to be lost.

Industry minister Ian Macfarlane is refusing to endorse a new target above 32,000 gigawatt hours even though the desperate clean energy industry has offered, to accept a lower  target of 33,500 gigawatt hours and has received the support of the ALP for this compromise.

Liberal MP Dan Tehan from the Portland area, where more than  80 jobs at wind turbine manufacturer Keppel Prince have been lost as the result of the stalled negotiations, has called for the Abbott Government to urgently lift its target.

So far his pleas have been ignored by a short-sighted federal government determined to push coal and to neuter the  clean energy industry.

Clearly the general public does not endorse this retrograde attempt to wind back the renewable energy industry, with almost everyone we speak to at local festivals strongly in support of clean energy and appalled at the damage being inflicted on investment and jobs.

We have also found strong support for stronger targets for cutting greenhouse gas emissions. Currently Australia’s target for cutting emissions by  2020 is a pitiful 5 per cent cut below 2000 levels and there is precious little sign that the Federal Government will significantly lift our targets for the post 2020 period.

The Climate Change Authority, which  is advised by top Australian climate scientists and also by business representatives, has recently called for Australia to lift its targets to 30 per cent by 2025 and to lift its immediate targets to 19 per cent.

However, Australia’s premier scientific institution has essentially backed the position of the Climate Change Authority in calling for a dramatic lift in our targets.

The Australian Academy of Science has said the country should adopt an interim goal of cutting emissions by 30 to 40 per cent below 2000 levels 2030.

The academy said this would be consistent with Australia’s emissions approaching zero by 2050 and with halting global warming before it rose more than 2 degrees – the figure accepted by the global community as the upper limit for preventing runaway climate change.

Many scientists believe we are already experiencing dangerous warming and that emissions must be cut at emergency speed, a message the Coalition Government has resolutely refused to hear.

Lighter Footprints is heartened to find that ordinary sensible citizens are much more receptive to the urgent warning bells being sounded by our most eminent scientists. 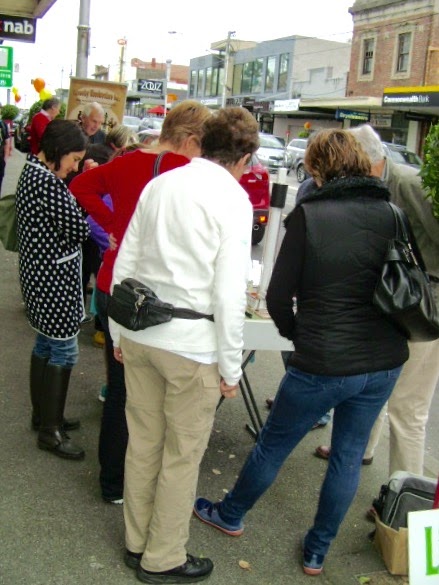