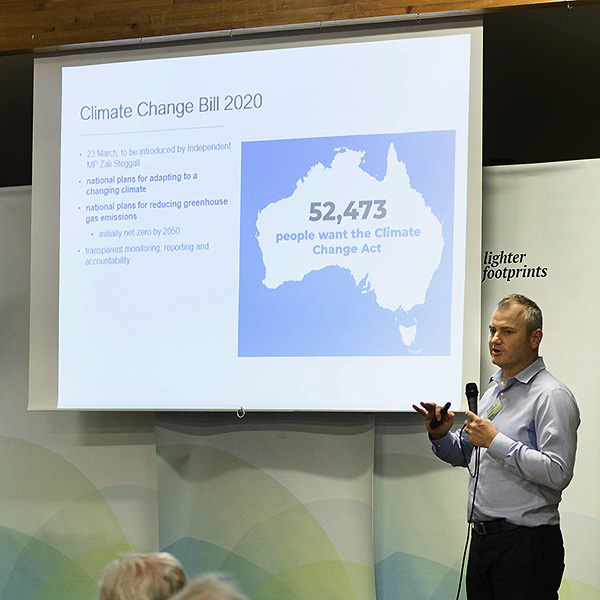 Last Wednesday 26 Feb Simon Holmes á Court offered us a terrific preview of the year ahead in climate solutions and collective action with over 100 captive audience members. So what did we learn? 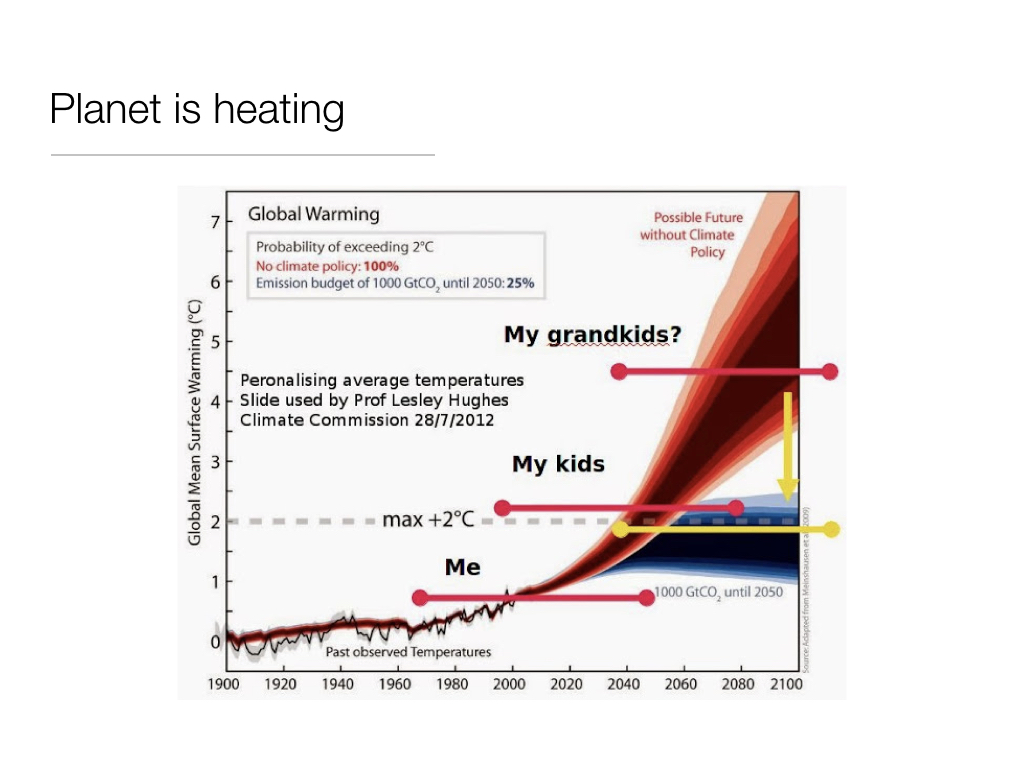 As far as sticking to the Paris Agreement, there’s still a massive gap between current policy and the policy we need to reduce emissions by enough to keep global warming to 2 or even 1.5 degrees.

Because the emissions curve is only getting steeper, meeting our Paris goals will become harder the longer we leave it. By the end of this decade the world will have to decarbonise on a very short timescale if we want to keep global warming to 1.5 degrees, as shown by the graph below. 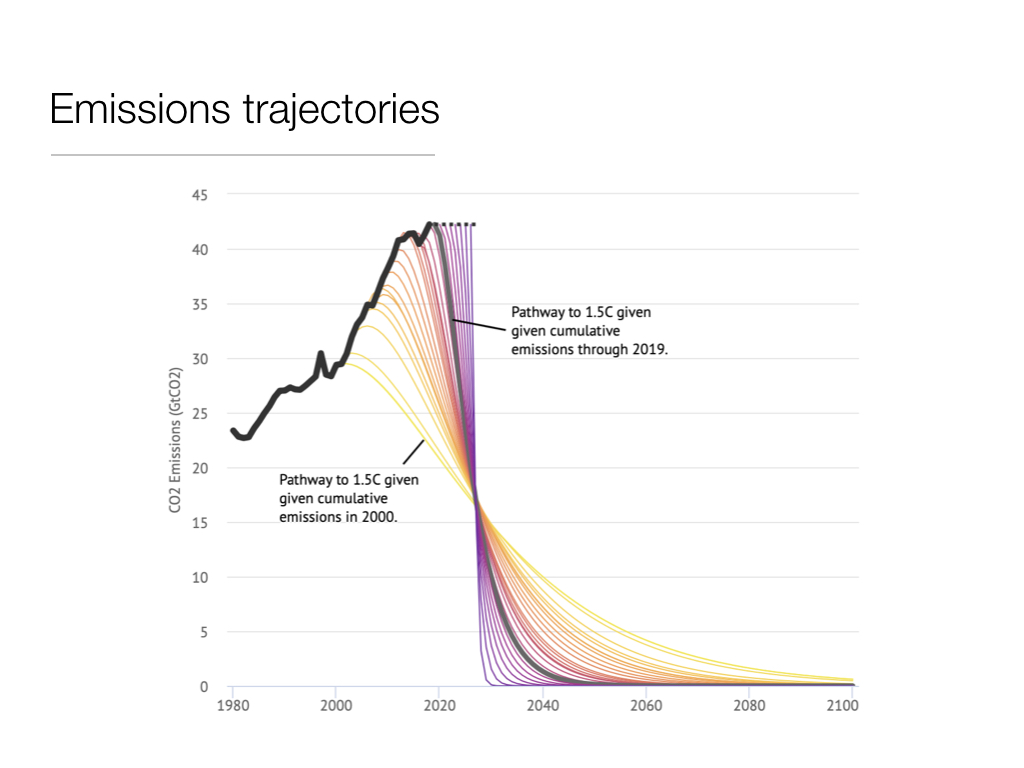 So how’s Australia doing? Not great. During the carbon price period our emissions were dropping at a decent rate, now they’re flatlining. Official Department of Environment projections suggest our emissions at the end of this decade will still be close to what they are today. 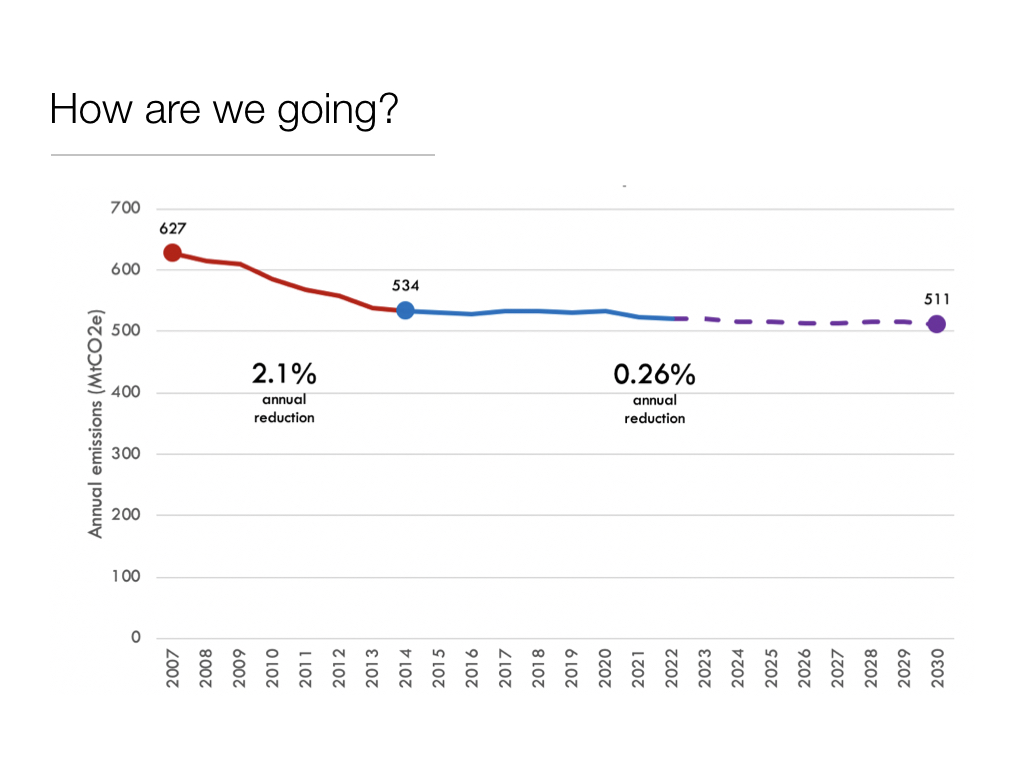 How do we cut our emissions? The easy bit

Australia actually has great potential to slash its emissions. Simon’s confident that the first 70% cut of our emissions (the red bars below) will  be straightforward to achieve. After that it gets tricky, but the first steps are simple and achievable: electrify everything and switch our power generation to renewables. 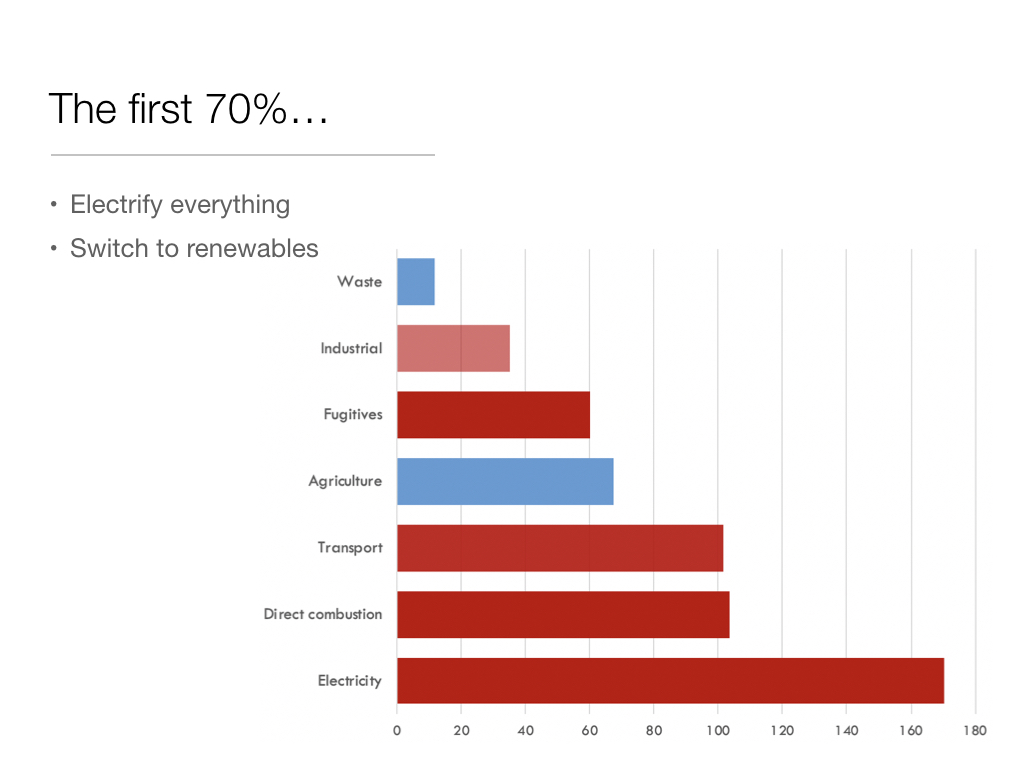 The government’s recent “technology roadmap” announcement is the wrong approach. It conjures up an image of scientists in white coats creating breakthroughs in laboratories. We already have most of the technology to achieve deep emissions cuts already, and we don’t have to wait to deploy them!

We should be learning by doing: deploy, develop & repeat. This is how Australian industry grew in the past … so why wouldn’t we take the same approach to decarbonisation?

And it’s important to dispel a common myth: more renewables does not equal more gas! In the last decade coal exiting the electricity grid has been replaced almost entirely with wind and solar, with gas playing a minimal role. We may see gas playing a slightly bigger part over the next two decades, but it’s certainly not going to be the “bridging fuel” we keep hearing about! 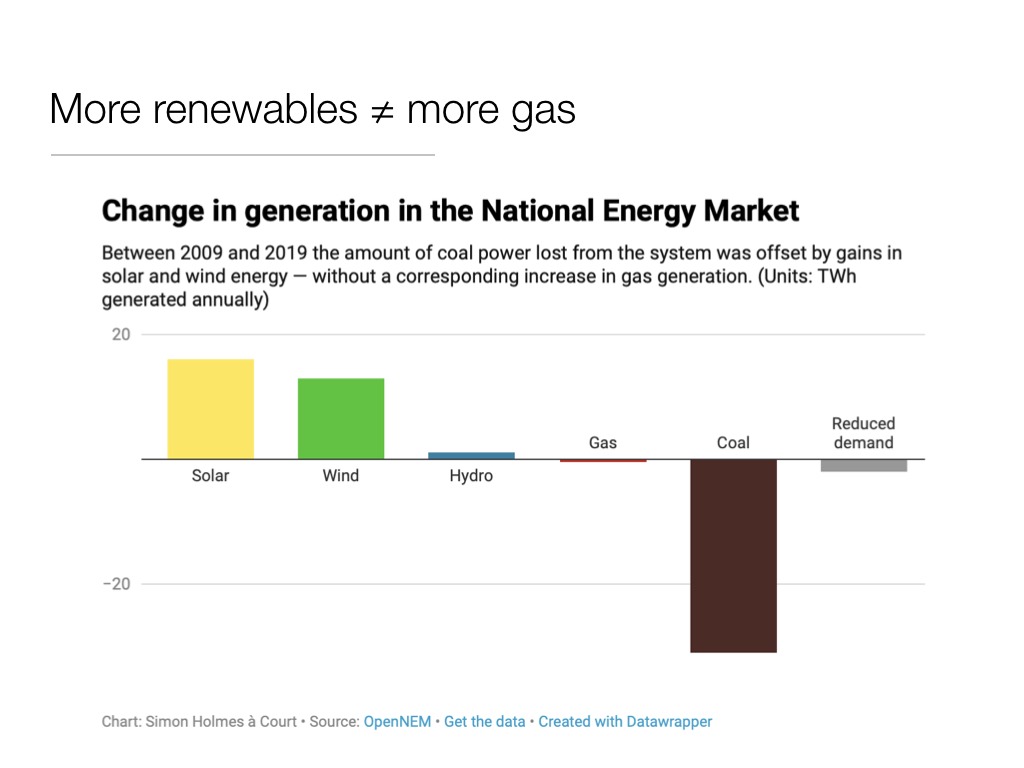 Our national electricity market operator has strong plans in place for keeping the lights on in a renewables-dominated system. Simon thinks they’re a little bullish on how little gas will be required (and that batteries will play a bigger role) but you can see from the following graph how pumped hydro is expected to play an important “firming” role to compliment wind and solar power. 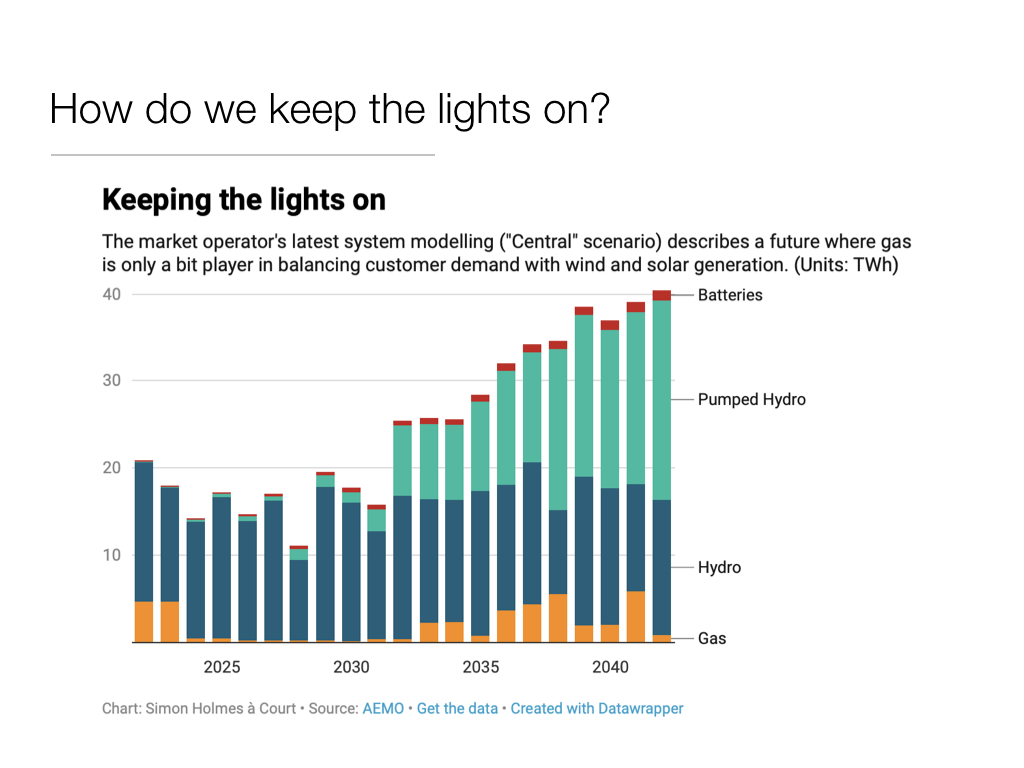 How do we cut our emissions to net zero? The hard bit

So that’s electrification and renewable energy, but what about the other 30% of emissions in other sectors of the economy we need to deal with?

Agriculture is an interesting one: Simon’s not across all the solutions but knows there’s a heap of ideas coming from Drawdown. And you might remember our fantastic meeting on Regenerative Agriculture last September.

Steel making used to be entirely dependent on metallurgical coal, but the industry is moving quickly. There will be commercial-scale steel plants operating on hydrogen gas by the end of this decade, and if the hydrogen is produced by renewable energy then voila! Green steel! The pathway for a zero-carbon steel industry is clearly defined, and Australia could capitalise on this.

Cement is one of few industries Simon has come across where carbon capture & sequestration (CSS) is a viable option. He visited a pilot cement plant with CCS plant in Belgium that the owners hope to scale up in a few years’ time. There’s also the possibility cement production could be switched from gas to electricity. Cement (unlike smelting or steel production) can be powered off and on without issue, so it can take advantage of cheap renewable energy when it’s being produced or be powered down for load shedding needs.

The owners of the cement plant are actually Australian – the prototype sits in Bacchus Marsh! Sadly, they moved to Europe because of the EU carbon price and a massive grant they couldn’t obtain in Australia. It’s important to remember in the coming days that while the federal government will trumpet its contribution of $600 million into technology research, they ripped $1 billion from ARENA and possible grants that could be made to cement companies like this one, forcing them offshore.

Hydrogen is a potential boom industry for Australia. Using renewable energy to produce hydrogen is straightforward: individual “hydrolyser” units can be bundled together and can split water into hydrogen and oxygen gas at scale. And they can be combined with other solutions! One of the steel mills Simon visited last year took its waste gases from steel production and combined them with green hydrogen to produce methanol, a potential substitute fuel in the aviation sector. There’s all sorts of chemical products that could be produced under the right conditions.

And there’s also green ammonia. Japanese companies are looking to invest in huge supply chains that start with Australian wind and solar energy producing green ammonia, which can easily be shipped to Japan. Ammonia is the alternative fuel of choice for the Japanese coal industry: every year legislation demands Japanese coal plants become more efficient, and ammonia is a fuel substitute that can be injected directly into their furnaces.

But there’s more! The shipping industry has always been a tricky proposition to decarbonise, but green ammonia may be the solution. Japan’s biggest shipping line predicts that in 5-10 years’ time green ammonia will be cheaper than marine oil to power its container ships, and the shipping line is already working to convert their oil-driven engines. Zero emissions shipping, once thought to be a distant prospect, may be much closer than we anticipate!

No winning without collective action

But solutions need to be coupled with collective action, and Simon sees a lot of reasons to be hopeful in 2020. Public support for a net-zero 2050 emissions target is higher now than it’s ever been – it’s even jumped dramatically since January this year! Even 68% of Coalition voters support the idea.

The Business Council of Australia – a noted blocker on climate action – has finally thrown its weight behind the 2050 target, as have the Ai (Australian Industry) group. Net-zero emissions by 2050 is also the organising principle behind RE 100: a group of 100 high-powered companies signing on to more ambitious climate action. 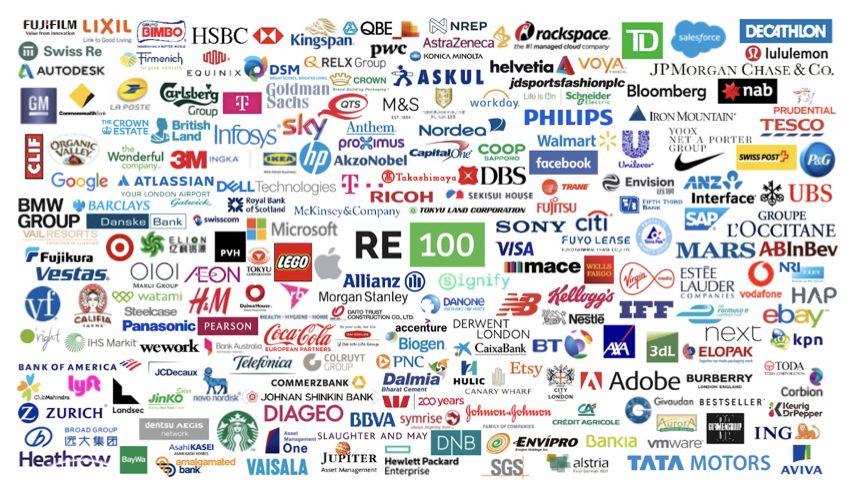 But what can we do at a personal level?

Simon has a bold message: get angry and get organised. Personal sacrifice and lightening our own footprints is admirable, but it should be the basic foundation of good climate action – just like basic hygiene is the bedrock of most of our daily lives. We need the right people elected, the right laws passed and the right treaties signed, but we also need people to respect and uphold those wins!

Most Lighter Footprints members already do so many of the basic actions, which is great! Simon has a series of guiding principles we can use to scale up our own ambitions in 2020:

2. Focus on systems, not yourself

4. Define your role – everyone is good at something

5. Know what you are fighting for, not just what you’re fighting against

6. Leverage your workplace and your affiliations

Lighter Footprints members are lucky to live in one of the most connected, influential electorates in the country and we should be taking better advantage of our natural resources here in Kooyong!

Simon’s final message was around the imminent arrival of Zali Steggall’s Climate Change Bill in federal parliament. It’s based on the UK Climate Change Act and is a great starting point for greater climate ambition. 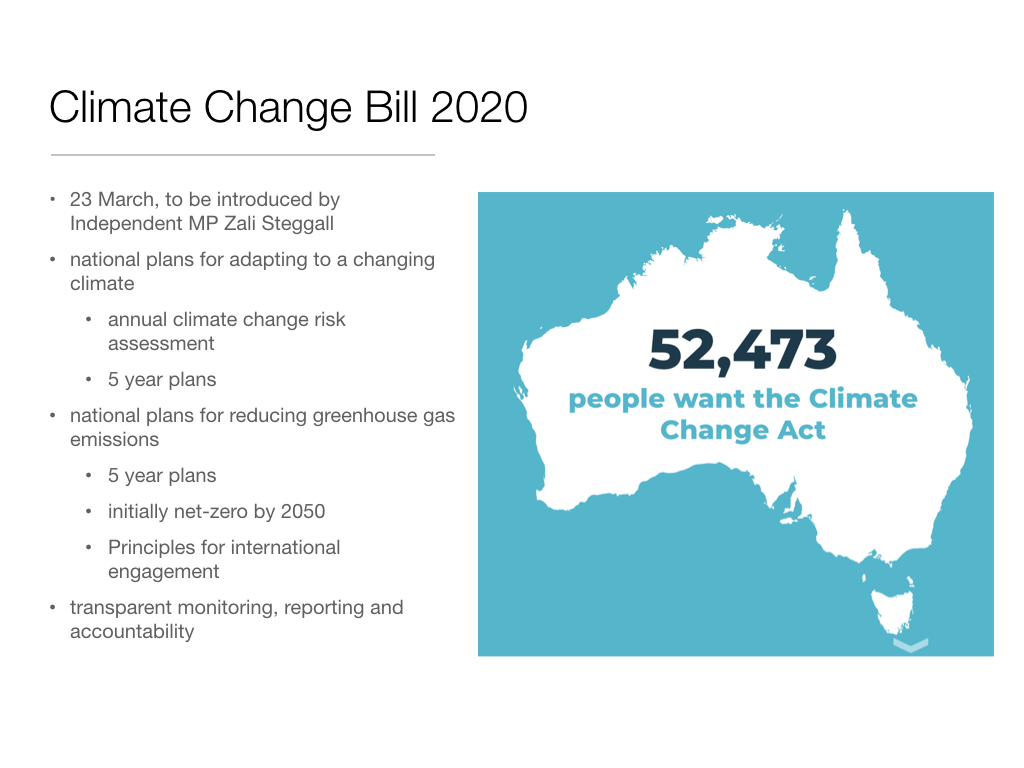 But as of last Wednesday night sign-ups to support the Bill in Kooyong trailed well behind most Victorian electorates. We should be winning this race hands down. Over 40% of us voted for a strong climate candidate with our first preferences last May! All of us should be encouraging more local friends to sign-up: head to climateactnow.com.au and share the link around!

You can relive the night by watching our Facebook Live recording here, and go the Facebook page album here.

You can also access Simon’s slides here as a series of images.

And make sure to register now for March’s monthly meeting: Climate, the Financial Sector and Shareholder Action presented by our good friends at Market Forces.